How airbags save lives and give the driver branded bruises

Airbags inflate by a solid propellant burning rapidly, which release expanding gas and fill a thin nylon bag.
By : HT Auto Desk
| Updated on: 06 Mar 2022, 10:26 AM 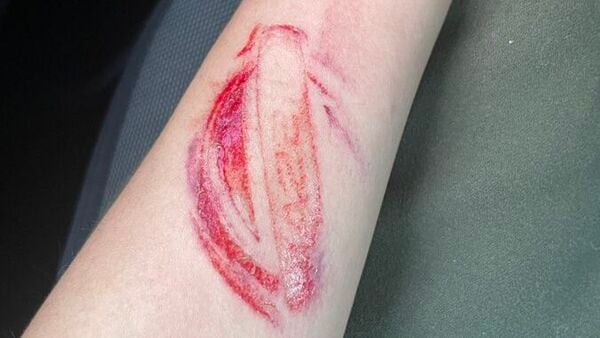 Airbags are considered one of the key elements for automotive safety alongside other active and passive technologies. In case of major mishaps, airbags often save the lives of car occupants but the latest Twitter post reveals that they often leave car logo bruises as well. The Twitter thread has gone viral showing oddly perfect brand logos as forearm bruises. More than 163,000 people have liked the tweets and more than 10,000 people have retweeted as well.

(Also Read: Six airbags for all Indian cars soon: The what and why of big safety move)

A Twitter user posted how she learnt about the branded bruise by airbags hard was when she was in a crash in her Nissan. Her vehicle was reportedly struck from the side and she walked away with a fractured hand and a forearm bruise with a nearly perfect Nissan logo. Many people have replied to her tweet saying about their respective experiences, where they also received similarly branded bruises with car logos. Interestingly, most of these images reveal the bruise at a certain spot in the arm.

The images also reveal that people who own vehicles from Dodge, Honda, Mazda, Jeep, Buick, Mercedes-Benz have very similar stories to tell. As it appears, when the driver's airbag explodes, the brand logo at the centre of the steering wheel hits the driver and as a defensive reflex mechanism, the driver puts his or her hand in front of face, while the logo hits the forearm and leaves a bruise.

Airbags inflate by a solid propellant burning rapidly, which release expanding gas and fill a thin nylon bag. The inflation of the airbag takes a fraction of a second and pushes the airbag outward at a speed of 321 kmph. The driver airbag also blows out the central steering wheel panel, which is usually decorated with a brand mark or logo.