Home Auto Cars News Honda Civic 2022 Teased Ahead Of Prototype Reveal. And It May Be A Visual Treat

Honda Civic 2022 teased ahead of prototype reveal. And it may be a visual treat

In its 11th generation, the Honda Civic promises to look a whole lot more contemporary and in tune with the demands and expectations of buyers in the current times.
By : HT Auto Desk
| Updated on: 13 Nov 2020, 12:25 PM 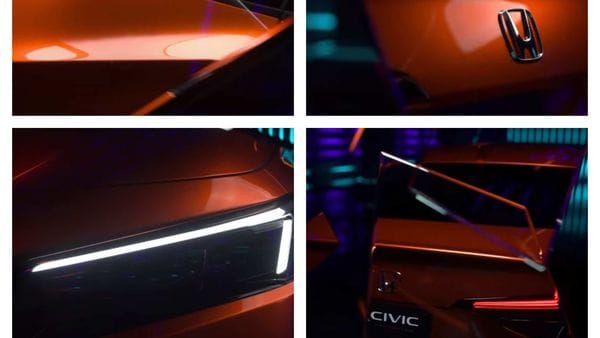 Teaser images of the new Civic prototype from a video posted on Youtube by Honda.

Honda Civic has been on global roads for years and years, raved about for its performance as much as it is for its reliability and looks. That third aspect may now be taken several notches higher with the 2022 Honda Civic scheduled to be showcased in prototype form factor next week. The Japanese car maker recently released glimpses into what to expect and the styling extravaganza likely on offer is expected to excite sedan lovers once again.

In its 11th generation, the Honda Civic promises to look a whole lot more contemporary and in tune with the demands and expectations of buyers in the current times. A more athletic appeal, coupled with an angular design language, is rather certain from the glimpse at the car that the company has offered. The prototype version gets a gloss black grille along with a Honda badge in chrome. The wheels are in gloss black. Additionally, the thin but stylish LED lights at the front as well as on the rear are the other highlights, alongwith strong character lines on the side.

All of these updates are on the prototype version which is all set to be showcased and it is likely that most - if not all - may find way into the production version as well.

(Also read - Sedan vs SUV: In David vs Goliath battle, which one would you choose?)

There is no word yet on the powertrains yet but reported suggest that four-cylinder petrol engines in varying state of tunes may be expected. And while car makers are increasingly opting for automatic transmission options considering the massively growing demand in several markets, Honda may offer a manual gearbox as standard.

For now though, it is the styling updates that will be in focus with Honda assuring a look that is several steps ahead of the model currently on sale in several global markets.