From SUVs to MPVs: Top 10 seven-seater cars in India

Several automakers are launching their three-row SUVs in India, as demands for such vehicles are increasing.
By : HT Auto Desk
| Updated on: 16 Feb 2022, 03:07 PM 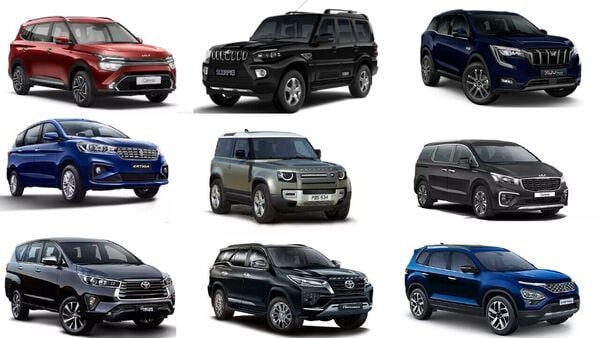 Three-row SUVs are finding increasing number of takers in India.

With the growing demand for SUVs, India has been witnessing a wide range of new models being introduced to the country's auto market. Amidst this trend of high demands for SUVs, there is a sub-trend as well. the three-row SUVs are finding an increasing number of takers.

Motivated by this sub-trend, the automakers are also focusing on bringing their products into the segment that offer seating capacity for seven occupants through three-row seats. The latest on the list is the Kia Carens which was launched on 15th February this year.

Here are the top 10 seven-seater cars available in India across different price slabs.

Mahindra XUV700 comes as a premium offering from the homegrown automaker. The SUV was launched with a new brand identity and it sports a three-row seating alignment that can accommodate seven occupants. Priced between ₹12.95 lakh and ₹23.79 lakh (ex-showroom), the Mahindra XUV700 is also available in a five-seater variant.

Kia Carnival was the second model in India from the South Korean automaker. This premium MPV comes as a well-capable challenger against the Mercedes-Benz V-Class and it is priced between ₹25.49 lakh and ₹34.49 lakh. With its premium features on offer and competitive pricing, Kia Carnival also throws challenges to Toyota Innova Crysta.

Mahindra Scorpio is one of the bestselling SUVs in India since its inception. This tough off-roader is a true-blue SUV from the homegrown auto major. Despite being old enough in the Indian market, the demand for this SUV still persists. The Mahindra Scorpio comes offering seating capacity for seven occupants and it is available at a price range of ₹13.18 lakh and ₹18.14 lakh (ex-showroom).

Kia Carens MPV comes as the latest entrant in the segment. It is the fourth product from the brand in India and despite being an MPV, it carries the design of an SUV. Kia Carens seven-seater MPV comes available at a pricing range of ₹8.99 lakh and ₹16.99 lakh (ex-showroom).

Toyota Fortuner is the best-selling premium SUV under ₹50 lakh segment. The SUV has been in business in the Indian market for a quite long time and its latest iteration shares the platform with Toyota Innova Crysta and Toyota Hilux. The SUV comes priced between ₹31.39 lakh and ₹43.43 lakh (ex-showroom), and it offers seating capacity for seven occupants.

Maruti Suzuki Ertiga is the bestselling MPV in India. It is also one of the most affordable ones in the country. Priced between ₹8.12 lakh and ₹10.85 lakh (ex-showroom), the MPV competes with Toyota Innova Crysta, Kia Carens. The MPV offers seating capacity for seven occupants through its spacious and comfortable cabin.

Toyota Innova Crysta is one of the main revenue churners for the Japanese automaker in the Indian market. Initially launched as Toyota Innova, the MPV later got a makeover and the Crysta nomenclature as well. The MPV offers a premium riding experience to the occupants and it comes with seating capability for seven occupants through a three-row arrangement. The Toyota Innova Crysta is priced between ₹17.30 lakh and ₹25.32 lakh (ex-showroom).

Tata Safari is the new iteration of the famous SUV from the homegrown automaker. The design of the new-age Tata Safari is completely different from the original model, and it is more in line with Tata Harrier. Priced between ₹14.99 lakh and ₹23.29 lakh (ex-showroom), the SUV offers a seating capacity to seven occupants.

Volvo XC90 is the flagship SUV of the Swedish luxury carmaker and this SUV competes with rivals such as Mercedes-Benz GLX, BMW X7. Volvo XC90 is also one of the safest cars in the country that offers seating capacity for seven occupants. The SUV comes priced between ₹90.90 lakh and ₹1.31 crore (ex-showroom).

Jaguar and Land Rover has completely revised the Defender SUV, which is one of the iconic true-blue off-roaders from the British luxury car marquee. The luxury SUV comes priced between ₹80.72 lakh and ₹1.22 crore (ex-showroom).