Ford Everest SUV, which reminds of Endeavour, to make global debut next month

Ford Motor has teased the upcoming Everest SUV, which appears to have drawn some inspiration from the Endeavour SUV the carmaker sold in India before pulling out.
By : HT Auto Desk
| Updated on: 18 Feb 2022, 04:05 PM 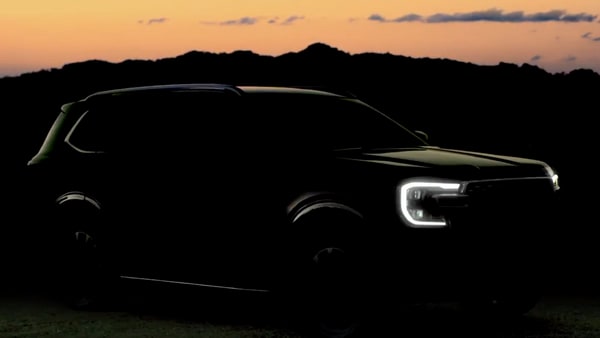 Ford Motor will take the covers off its new Everest SUV on March 1.

Ford is gearing up to launch the new generation Everest SUV, which derives a lot of inspiration from the Endeavour SUV that was on sale in India before the carmaker quit the market. Ford has released a new trailer for the seven-seater Everest SUV, which will now enter its third generation. The SUV will be globally unveiled on March 1.

The new teaser shows the model completely in the dark with only the new C-shaped LED headlight shining bright. This is the second teaser after the previous one came out a couple of months ago.

The new Everest SUV is likely to get a redesigned front grille, large alloy wheels, roof rails, a sidestep and upright pillars, C-shaped LED tail lamps, roof-mounted spoiler, high-mounted brake lights and new-look air intakes. The wheelbase has also been increased to 50 mm which means there will be more legroom for the passengers in the back.

Ford Everest is a body-on-frame SUV which will continue to rely on the V6 diesel engine, the same one that powers the Ford Ranger. There is a badge on the front fenders that indicates that the SUV will be offered with a 3.0-litre V6 turbodiesel engine mated to a 10-speed automatic transmission that sends power to all four wheels. The engine is capable of generating maximum output of 254 bhp and 600 Nm of peak torque.

The Everest SUV could also get a four-cylinder 2.0-litre turbodiesel and a 2.3-litre EcoBoost petrol engine along with a plug-in hybrid option.

The interior of the Ford Everest SUV will have the same dashboard as the Ranger pickup truck, including a 12-inch touchscreen. The SUV could also be equipped with advanced safety features such as rear cross-traffic alert, blind zone warning and autonomous emergency braking system that comes under ADAS (Advanced Driver Assist System).

Ford will offer Everest SUV in select markets including the Philippines, Thailand and Australia. Depending on the markets, it will take one rivals such as Toyota Fortuner, Mitsubishi Pajero Sport, Nissan X-Terra and Isuzu MU-X.