'Faster than Porsche, safer than Volvo' Tesla Model S Plaid debuts in US 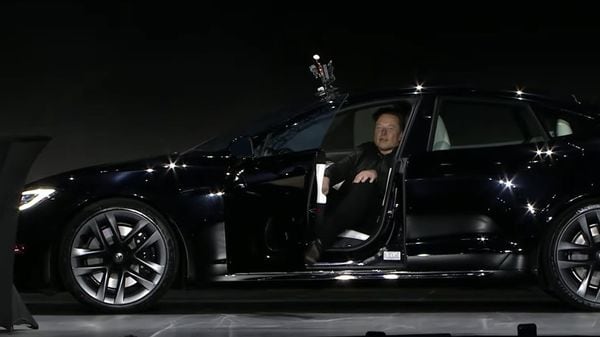 Tesla Model S Plaid being driven on stage by CEO Elon Musk during the launch at the carmaker's Fremont facility in US. (Screengrab from Tesla live event)

Tesla Model S Plaid, projected as the fastest car in the world, has been launched officially in US during an event held a short while back at the electric vehicle manufacturer's Fremont facility in California. Tesla CEO Elon Musk himself drove in the new electric car, the performance version of the Model S sedan, on stage before hosting the event in his inimical style.

Tesla Model S Plaid has been launched at a price of 129,990 dollars (roughly converted to almost ₹95 lakh). The earlier price of 119,990 dollars was hiked by Tesla just 24 hours before the event, along with price hikes for some of its other models too.

Elon Musk announced that the deliveries of the electric four-door Tesla Model S Plaid have been opened from today. The launch was earlier scheduled to take place o June 3, but had to be deferred due to supply issues.

Tesla Model S Plaid packs 1,020 horsepower, that helps it do a 0-to-60-mph dash in less than 2 seconds. "It is faster than a Porsche, safer than a Volvo," is how Elon Musk decided to put it during the event.

(Also read: Elon Musk, in a leather jacket, shows off the fastest ever Tesla car)

The top speed of the Tesla Model S Plaid is claimed to be 200 mph (321 kmph). However, Tesla later clarified that the speed can only be attained with the help of proper wheels and tires. The Tesla Model S Plaid will stand on 19-inch wheels, but customers can also choose the optional 21-inch wheels as well. However, the larger wheels will definitely down the electric car's optimum range of 627 kms.

Tesla claims the Model S Plaid can add up to 187 miles (300 kms) of range in just 15 minutes using its Superchargers. According to Elon Musk, the Tesla Model S Plaid can charge so fast that it will be over while the owners takes a coffee break. Musk also highlighted the vast network of Superchargers it has built across the world for its customers, which has now gone up to 25,000 stations.

Tesla took nine years to come out with this performance version of the Model S sedan. Tesla Model S Plaid aims to take on rivals like Porsche, Mercedes-Benz and Lucid Motors in the luxury electric vehicle market.