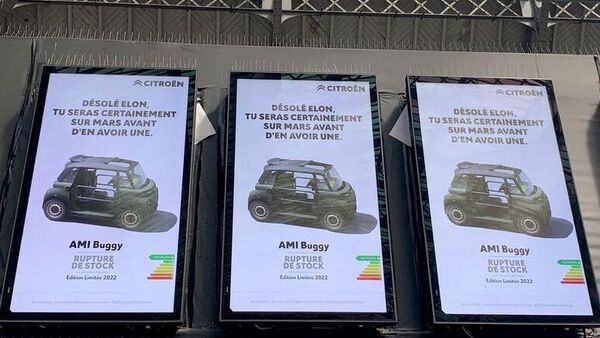 French carmaker Citroen did not lose an opportunity to pull Tesla's CEO Elon Musk's leg after recording a quick sale of its limited edition Ami buggy electric car. Citroen sold out all of the 50 Ami mini electric cars through its digital platform in less than 18 minutes on Wednesday. The carmaker put up billboards with a cheeky message to Elon Musk, who owns world's largest electric vehicle manufacturer Tesla.

"Sorry Elon, the only way to get one is to buy us", Citroen's message for Musk was shown on the billboards at Paris' Gare de L'Est train station. The message is seen as a dig by the French carmaker at Tesla boss possibly referring to his appetite to take over other companies. Musk had recently announced a $44 billion bid to take over Twitter, which was recently approved unanimously by the board of the social media platform.

"The fastest customer managed to complete the whole purchasing journey and get his 'My Ami Buggy' in only 2 minutes and 53 seconds," Citroen said after the limited edition My Ami Buggy got sold out.

Citroen had launched the mini electric car Ami back in April 2020. Since then, the French auto giant has sold more than 22,000 Ami EVs. Citroen Ami's biggest markets have been Europe, Turkey and Morocco. In fact, one does not require a driving licence to drive this nano-sized EV in Morocco, where it is manufactured locally.

The limited edition My Ami Buggy, which was sold by the carmaker, comes at a starting price of 9,790 euros (roughly converted to around ₹8.09 lakh). The mini electric car does not have a conventional roof. Instead, Citroen offers canvas roof which can be rolled back when required. It also has metal tube gates.

The Ami EV mini electric vehicle stands 2.41 metres in length, 1.39 metres in width, 1.52 metres in height and rides on tiny 14-inch wheels. The nano-sized EV comes powered by a modest 6 kilowatt electric motor and a 5.5 kWh battery pack. Its bodywork is mostly plastic and it comes with a no-frills interior. The vehicle's top speed is 45 kmph and it can go up to 70 kilometres on single charge.