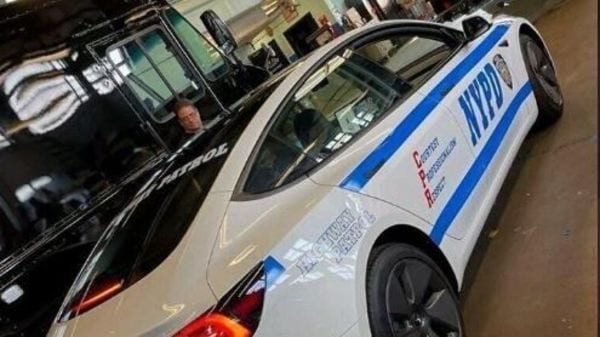 The New York Police Department has reportedly added a Tesla Model 3 to its fleet of cars and may plan to deploy the electric vehicle (EV) on patrol duty. Model 3 is the most affordable - and most popular - EV offered by Tesla and while it was already reported in the past that the NYPD is interested in it, the department has now gone ahead and bought one.

Police departments are increasingly getting interested in buying EVs, primarily because of the cost benefits when operating such vehicles while also backing performance capabilities of battery-powered cars. The NYPD is hardly the first force in the US to add an EV but it is being speculated that it could deploy the Tesla as part of highway patrols. The department had already added a Tesla Model Y Long Range to help its personnel, late 2020. The Tesla Model Y was deployed to the Detective Division.

While Model Y is the more premium offering, the Model 3 is quite capable as well, firing to 100 kmph in a little over three seconds and with an estimated range of over 560 kms. It also has a top speed of 260 kmph which may mean it could out-drive most vehicles wherever deployed on duty.

Model 3 is the best-selling Tesla the world over but CEO Elon Musk has previously confirmed an even more affordable model is being worked upon which could be brought in in emerging markets. With an eye out on entering newer markets and bolstering sales to further strengthen the grip on the EV segment the world over, Tesla could indeed continue expanding product portfolio which is also set to welcome the entry of the Cybertruck. Touted as a capable pick-up truck with the performance credentials of a super car, it has already been booked by Dubai Police for helping its personnel.