Charge of the luxury EVs: Audi teases e-tron ahead of India launch

Audi will first drive in e-tron and follow it with the launch of the e-tron Sportback.Audi e-tron will take on Mercedes EQC which has already been launched, as well as the upcoming Volvo XC40 Recharge and Jaguar I-PACE.
By : HT Auto Desk
| Updated on: 10 Mar 2021, 11:38 AM 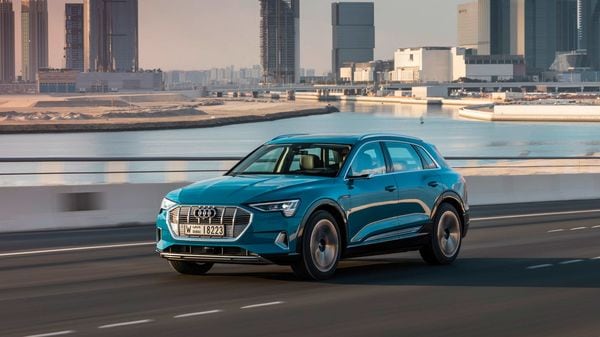 Audi e-tron is all set for an India launch, close on the heels of several rivals in the luxury segment either launching or getting their respective electric vehicles ready for the market here. The e-tron hopes to stand out, however, because of its exterior styling and drive performance - two factors that have helped its cause in several overseas markets where the EV has already been around for some time.

Audi's official Twitter handle on Wednesday posted a teaser video which underlined once again that the e-tron is coming soon to India.

The eventual launch of the EV could further intensify the battery-powered car market which currently only has Mercedes EQC in the luxury space but one that is also readying to welcome the Volvo XC40 Recharge and the Jaguar I-PACE.

The e-tron has fared well in global markets with the Germans selling 17,641 units in the first half of 2020. And with plans to roll out as many as 20 fully-battery powered models around the globe by 2025, the e-tron sets the base for a massive onslaught.

While the bulk of Audi India's offensive could be based on the e-tron, the company is also driving in the e-tron Sportback at some point this year. Balbir Singh Dhillon, Audi India Head, had previously stated that some of the 20 models planned for global markets will also enter India and that the e-tron and e-tron Sportback would be just the start. Audi India will initially import "a decent quantity of vehicles" when launching the two models, Dhillon said, adding consumers can also place customized orders which would be delivered in about four months from the time of ordering.

Local assembly may take a while however as Audi, as with other players in the luxury space, need to target some sort of volumes before going down that path.