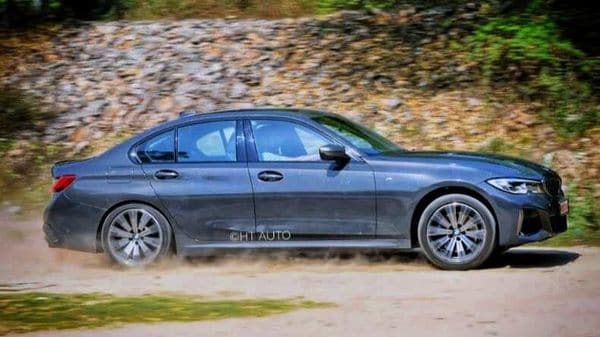 Performance vehicles have long been the symbol of automotive excellence but their popularity has often been sacrificed at the alter of affordability. The times they are a-changin' though and luxury car manufacturers are now increasingly eyeing local production which would mean a more affordable price tag on these enormously capable machines. With an aim to grab the spotlight and place it firmly upon itself, the BMW M340i xDrive is waiting in the wings to become the first performance vehicle from the Germans to be locally-produced and once launched, will be the quickest 'Made-in-India' car. Phew, that's quite a relief for anyone who has been eyeing a comparatively more affordable BMW M! 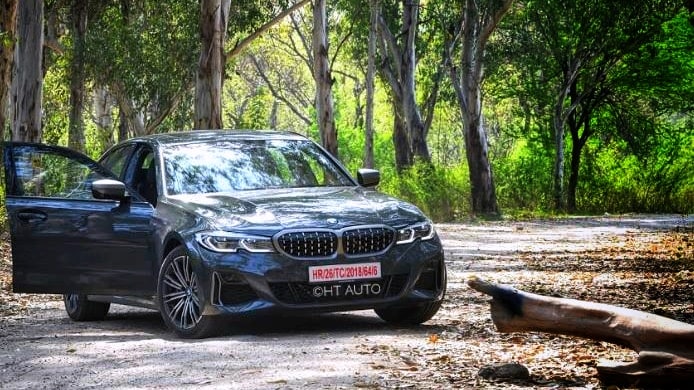 The BMW M340i xDrive has a strong visual presence, especially from the front. (HT Auto/Sanjay Rohilla)

To be locally assembled at the BMW facility in Chennai, the M340i xDrive - quite obviously - holds a place of prominence in the ever-popular 3 Series sedans. It is at the core of the brand and, in many ways, seeks to establish itself as the pinnacle of automotive excellence. Clearly then, I was quite pumped to see the car come in for a day to be tested. The emphasis was on to see just how good this machine is beyond race tracks and out and about in the real world. 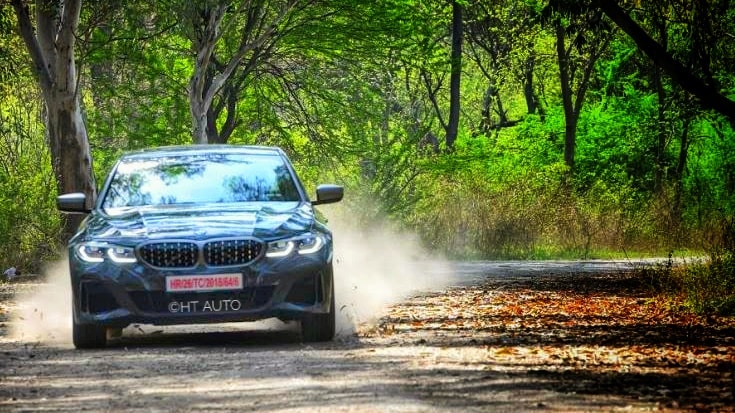 While the Eco Pro and Comfort modes are well-tuned to provide a steady drive experience, it is in Sport mode that the BMW M340i truly displays all its glory. (HT Auto/Sanjay Rohilla)

It is great that the Make in India campaign has a lion for its logo because the BMW M340i xDrive seeks to indeed roar loud from the word go. Under the hood is a three-litre engine which boasts of an aluminium crankcase and an aluminium cylinder head. BMW states that the turbocharging system has also been redeveloped. Fuel supply is taken care of by High Precision Injection technology and the car now claims to have better emission values.

But what does all of this jargon translate to when one does sit inside and brings the car alive? Power, pure power. 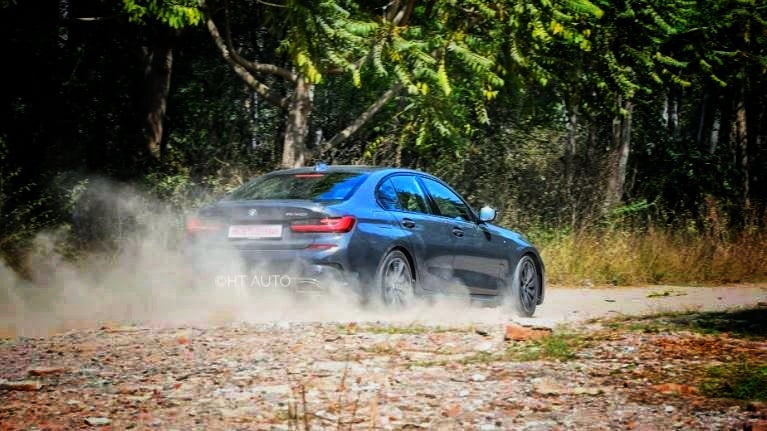 Race tracks may be the preferred home for the BMW M340i but it is equally capable of providing a thrilling drive experience on a wide variety of surfaces. (HT Auto/Sanjay Rohilla)

There is 387 hp and 500 Nm of torque for the taking and the M340i xDrive is resplendent in its ability to fire lock, stock and six-cylinder barrel (engine). BMW claims that the car can shoot to 100 kmph in 4.4 seconds.

No, I chose not to fire it at the claimed rate as the test drive was mostly within city limits.

No, I don't have any doubts that the BMW M340i xDrive may well indeed do the sprint to actually be the quickest car locally produced in the country.

I did engage the Sport and Sport+ modes to get a feel of what the M340i xDrive has on offer and the sheer thrust in just a quarter-throttle push was enough to impress. And all along, the satiating rumble of from the M Sport exhaust unit was music to the speed-seeking body, mind and soul. Indeed, a conventional music system inside this car is outright blasphemy.

But the best of engines would only pitter and patter unless mated to an equally competent transmission set up. Thankfully, the marriage between the engine inside the M340i xDrive to the eight-speed Sport Steptronic transmission box is a match made in automotive heaven. The gear shifts are precise and the range is wide enough to ensure that here is a car that won't be out of place whether ambling along or hurling ahead. There is the addition of a coasting function in Eco Pro and Comfort drive modes which has the primary task of improving efficiency.

It is only when it comes to the M Sport suspension set up that the M340i xDrive is slightly shortchanged. Ever so slightly, anyway. The set up is a little too stiff and while it seeks to work in tandem with the steering, tires and braking system, the rigidity could have been toned down by a bit.

No complaints though as far as the variable sport steering is concerned and it is an absolute delight regardless of what one may be commanding the M340i xDrive to do - maintain lines, quick corners, sudden turns and tame parking moves.

The BMW M340i xDrive then ticks most of the right boxes when it comes to sheer drive capabilities. It is the M Grade of performance and is likely to impress even the most ardent of speed aficionados. But what is it to look at and to be inside this mean beast? 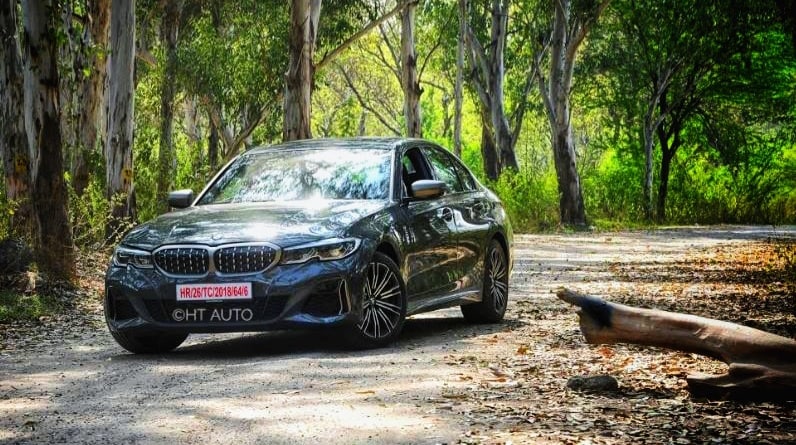 The BMW M340i takes the visual highs of the 3 Series and adds sporty touches all around. (HT Auto/Sanjay Rohilla) 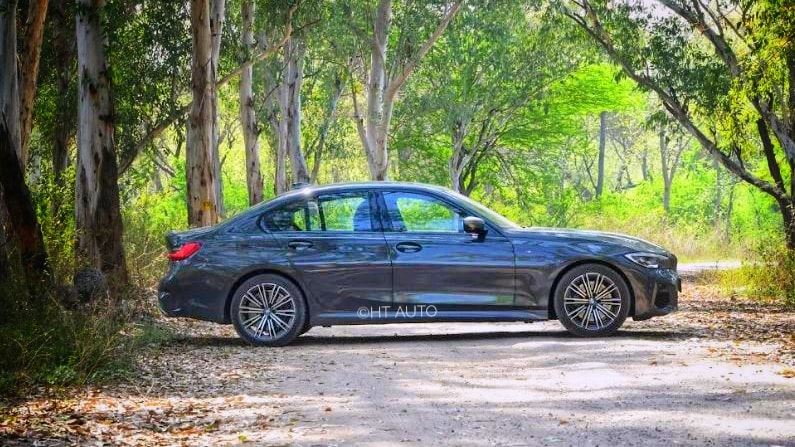 There is no denying that while the BMW M340i looks sporty from most sides, it also has an elegant appeal from the side. (HT Auto/Sanjay Rohilla)

The car has a low-slung visual profile which is dominated by a sporty and muscular character. The face typically sports the very familiar BMW kidney grill mesh inserts which are flanked by the LED headlights with BMW laserlight technology. The hexagonal DRLs sit like ornamentation but has its practical purpose, of course.

The muscular aspect of the look is enhanced by the four contour lines on the hood of the car which flow into the front grille.

From the side, the M340i xDrive has a slightly stretched out appearance and there's a resemblance to a track star waiting on the mark, for the mark. Character lines and surface contours are done tastefully and seemingly with the objective of giving it a speed-oriented visual profile. While 18-inch M light alloys are responsible for carrying the car, completing and complimenting the profile are L-shaped LED tail lights and the wide body with its slight spoiler element on the trunk lid. 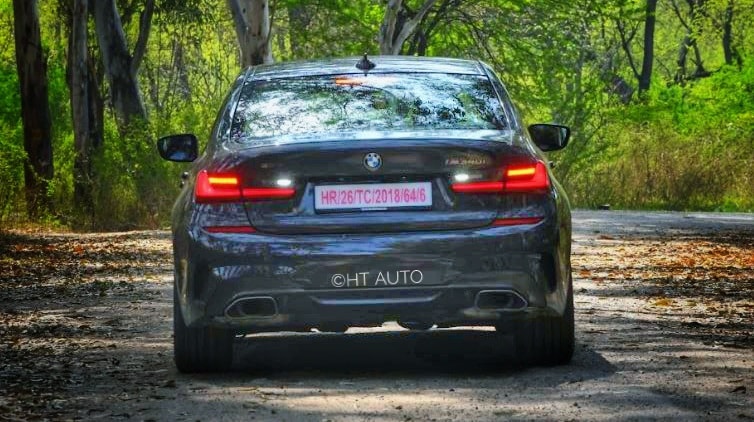 The rear profile of BMW M340i.

Now the M340i xDrive is a speed demon meant to be controlled sitting in the driver seat. This is clearly the throne and offers great cushioning with the added benefit of using the electronic side switches to pump up or down the side bolstering. The leather-wrapped steering with paddle shifters, the shadow-line elements, the precise upholstery stitching and the vivid infotainment screen all point towards a premium cabin which would appeal to occupants even when the car itself sits absolutely still. 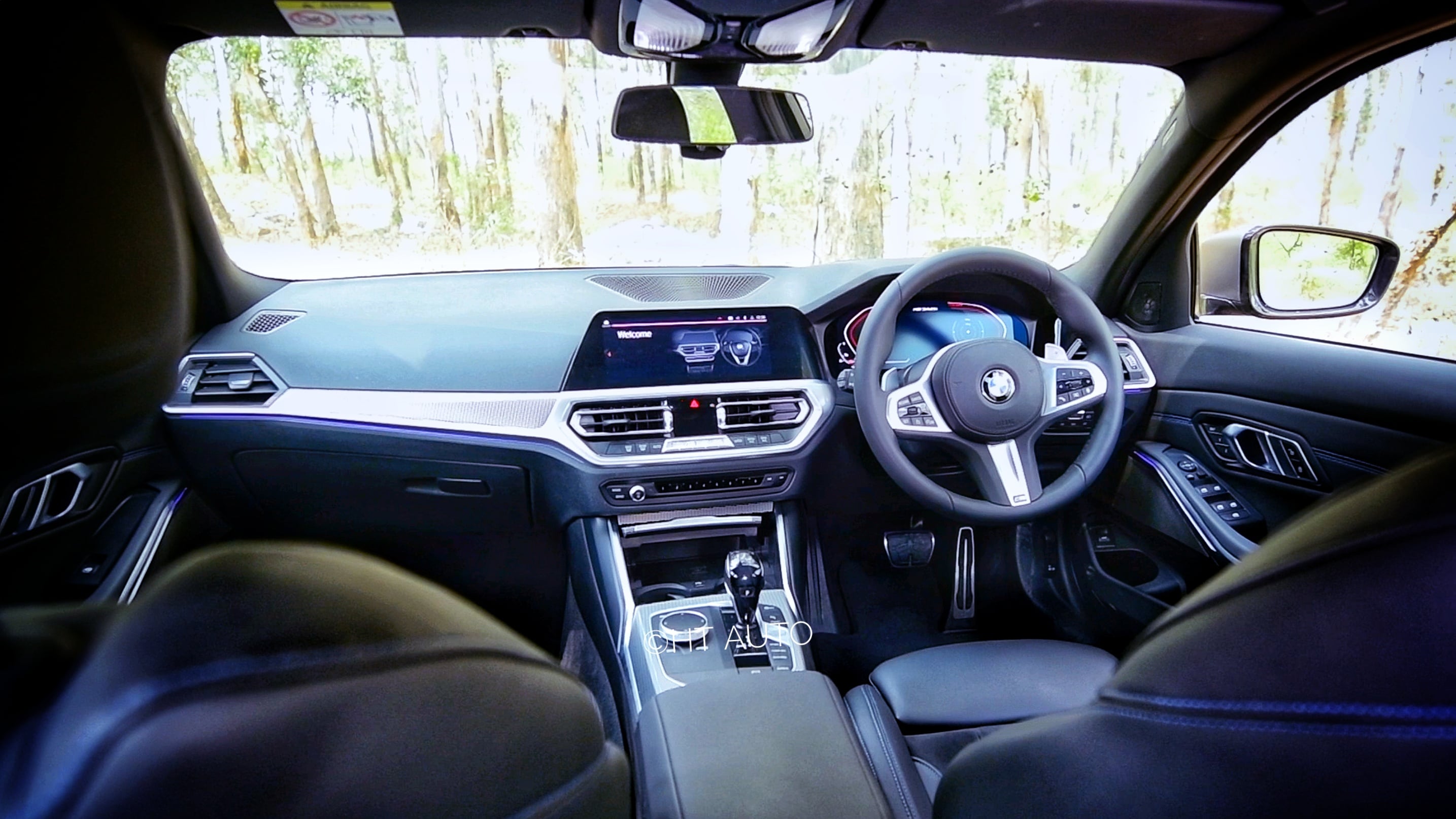 The cabin of the BMW M340i is well-appointed and is as premium as one would expect in the luxury performance segment, (HT Auto/Sanjay Rohilla)

Ambient lights, three-zone climate control, automatic head lights are some of the other feature highlights here. And just in case you do choose to switch on the music system, the audio profiles are taken care of by a 16-speaker Harman Kardon music system.

There is a 12.3-inch driver display and a 10.25-inch main infotainment screen which can be customized for layout, colour and display scheme. Additionally, the BMW Virtual Assistant allows for access to various functionalities through voice-based commands. Not enough? There is also support for gesture control, support for Android Auto and AppleCarPlay.

The Head-Up Display is positioned just right and is bright enough during the day without being jarring at night.

Move to the rear and the seats here are well appointed with decent levels of cushioning. Leg space, knee room and head room is impressive although the middle seat here would remain the least liked. 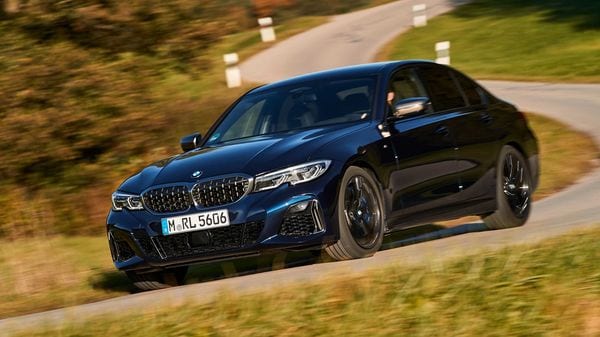 Bookings for BMW M340i xDrive are open at ₹1 lakh.

The BMW M340i xDrive is an all-out driver's car that still manages to have much to please all others in the cabin looking for a joy ride. It is tailor-made for speed thrills but if put to use as a daily drive option, it won't disappoint either. Now that it will be manufactured locally, expect the price tag to be somewhere in the region of ₹70 lakh (ex showroom) and while that may seem a little too steep for the regular target audience in the luxury segment, it could be quite a good deal for enthusiasts