The concept electric vehicle will be showcased at the upcoming Geneva Motor Show next month.
By : Sabyasachi Dasgupta
| Updated on: 25 Feb 2020, 03:06 PM 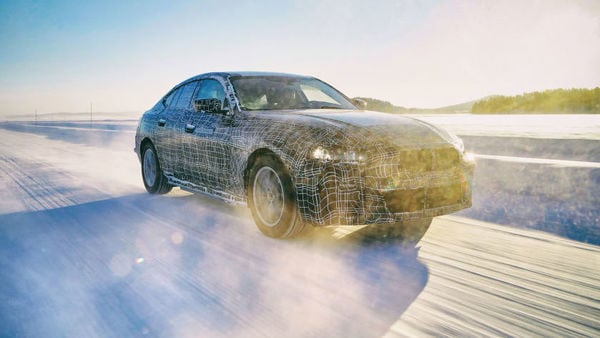 Photo of BMW i4 Concept during testing under camouflage.

BMW is all set to introduce its i4 Concept vehicle at the Geneva Motor Show next month. The company took to Twitter to make the announcement today. Not only that, BMW claima that the concept vehicle is also ready for production.

Stay ahead in style. In less than one week we will open a new chapter in our history with the unveiling of a pure-electric Gran Coupe -The BMW Concept i4.#THEConcepti4 #BMWi #bornelectric #GIMSSWISS pic.twitter.com/4cRMi2ZMie

BMW released the i4 specifications late last year, along with two i4 images wrapped in camouflage. BMW said the electric car will have 523 hp power, with a range of up to 600 Km.

The BMW i4 2022 will utilise the fifth generation eDrive hardware. The eDrive in question puts the electric motor, transmission and electronics into one cover. This technology will be used the first time in the iX3 crossover next year. BMW claims that recharging the battery up to 80 percent only takes about 35 minutes.

Power will come from BMW’s 5th generation electrical transmission, which consists of a 80kWh lithium-ion battery pack connected to either a single or twin engines. It will be able to hit zero to 100 kmph in about 4 seconds and a top speed of around 200 kmph. Photo of BMW i4 Concept vehicle during testing

Like many concepts, the i4 Concept vehicle will carry cameras built into thin pods instead of conventional mirrors, specific bumpers at both ends, oversized alloy wheels and it doesn’t will have no door handles for a more elegant and infinitely less practical appearance.

Analysing how the Concept X2 introduced in 2016 turned into X2 gives a clear idea of what to expect from the i4 concept linked to Geneva. Photos of a camouflaged test mule going laterally somewhere north of the Arctic Circle have also highlighted BMW's next electric car.