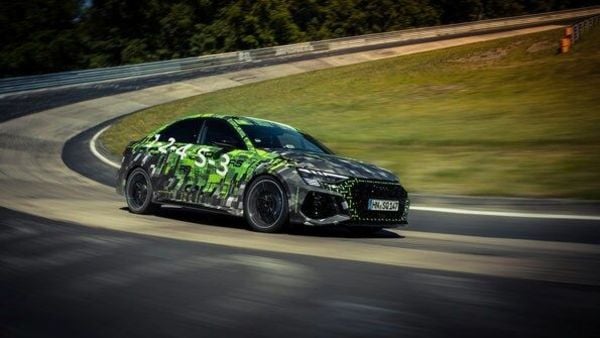 Audi claims that the RS3 sedan had no modification onboard before appearing for the lap run.

The new Audi RS3 sedan has become the fastest compact car after setting a new lap timing record of 7:40.748 minutes at Nürburgring Nordschleife. The German luxury carmaker has announced in a release that Audi Sport racing and development driver Frank Stippler beat the previous lap record in the compact class by 4.64 seconds in June 2021.

The torque splitter onboard the new Audi RS3, with its fully variable torque distribution on the rear axle was a key element in setting the new lap record, claimed the car brand. This is the first time an Audi car is using a torque splitter that distributes torque fully adjustably between the rear wheels, through a multi-disc clutch on each of the drive shafts.

Audi also claims that the particular RS3 sedan had no modification onboard before appearing for the lap run. Only the tyre pressure was adjusted according to the track conditions. According to the German luxury car brand, Audi RS3 being a performance-focused RS badged car, has its own engine and transmission characteristics. The new RS3 is claimed to be specially calibrated for the racetrack.

The performance sedan gets power from a 2.5-litre five-cylinder engine specially tuned for high-performance. The car is capable of running a top speed of 290 kmph and it can accelerate to 0-100 kmph in 3.8 seconds. The RS3 runs on Pirelli P Zero Trofeo R semi-click tyres. It uses 19-inch ceramic braking system fr stopping power. The car is claimed to have RS sport suspension plus with adaptive damper control, which individually and continuously adjusts each shock absorber to road conditions, driving situation, and the mode selected in Audi drive select.

Talking about the car, Frank Stippler said that the new RS3 is much more agile when driving from the middle of the curve to its end and when accelerating out of the curve. "For me, the torque splitter is a quantum leap in terms of agile driving," he also added.