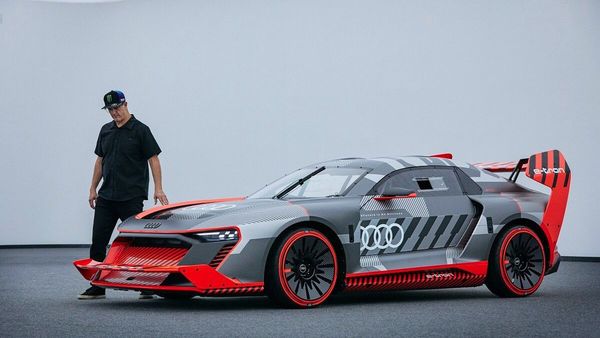 The car has been specially developed by Audi Sports for Ken Block.

Ken Block has been known for his high adrenaline pumping car stunts that feature modified vehicles. The latest for his Elektrikhana video is going to be an one-off all-electric Audi S1 e-tron Quattro Hoonitron, that the German luxury car major has revealed online.

The car has been designed in a manner that instantly brings back the memory of the legendary Audi Sport Quattro S that the carmaker used to charge to the summit in the famous Pikes Peak Hill Climb event. The auto major claims that it has exclusively and uniquely designed and developed the Audi S1 e-tron quattro Hoonitron for the American drift artist Ken Block. The all-electric one-of-a-kind car will be featured in the new video that Block is producing and will release in the next few months.

Speaking about his new drive machine, Ken Block said that this project makes a dream come true for him. “The S1 Hoonitron combines a lot of what Audi was already famous for in the nineteen-eighties," says Block. He also added that the car’s spectacular aerodynamics have now been translated into a totally modern form. "I think it’s cool that the Audi designers have been inspired by their own past and uniquely transferred the car’s technologies and appearance into the present," he further added.

Audi Sport has prepared this one-off Audi S1 e-tron Quattro Hoonitron drawing inspiration from the highly modified Group B rally car it used to win the Pikes Peak International Hill Climb back in 1987. The car is based on the recently introduced RS e-tron GT electric fastback, but has been extensively customised inside and out as per Block’s demands.

The car offers all-wheel-drive from dual electric motors and features a carbon fibre chassis with all of the necessary safety kit to meet FIA rules. The car has been designed by Audi Design in Ingolstadt.

As Ken Block said, he got to know about the car for the first time in November this year, when Audi gave him it for testing for few days in Germany. “I’m familiar with a wide variety of cars using internal combustion engines and transmissions, but there were a lot of new things for me to learn here. Spinning into a donut at 150 km/h directly from standstill – just using my right foot – is an all-new experience for me," he added.

Speaking about the car. Audi's chief designer Mark Lichte said that he and his team had the opportunity to develop a car that combines an icon of our brand with the future. “It was about creating a modern, all-electric interpretation of the S1 Pikes Peak. The timeline was extremely tight: while our design process normally takes one to one-and-a-half years, we only had four weeks from the first drawing to the final design. We were constantly in touch with Ken Block and his team and engaged in intensive exchanges," Lichte added.