Based on an EV platform jointly developed by Audi and Porsche, the Grandsphere Concept has a range of 750 kms on single charge. The output is also staggering with 710 hp and 960 Nm of peak torque.
By : HT Auto Desk
| Written By : Sabyasachi Dasgupta
| Updated on: 03 Sep 2021, 03:55 PM 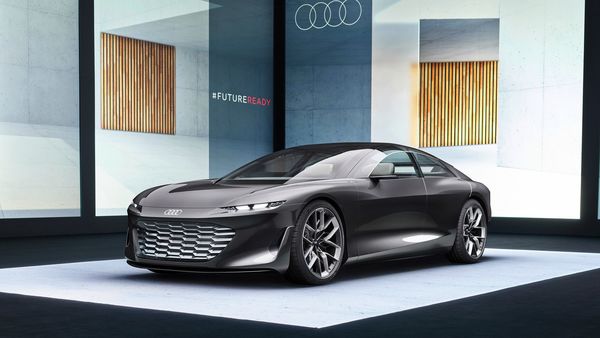 Audi Grandsphere Concept, the second of the carmaker's three new concepts, is an autonomous car with a level four capacity.

Audi has unveiled the Grandsphere Concept EV, the second of three planned concept vehicles the German carmaker says is a glimpse of its fully electric cars of the future with Level 4 autonomous driving technology.

Audi said it plans to sell a Tier 4-capable vehicle to consumers by 2026. The first concept, called Skysphere, was unveiled last month; Urbansfera will be shown next year.

The Grandsphere, a large luxury sedan with two front row seats and a rear seat, has two key highlights: the brand's signature cat-eye LED exterior lighting and a bespoke interior that reinvents luxury on wheels. Accessed through large portal doors, the Grandsphere's spacious interior replaces the massive traditional blackened touch screen prevalent in most of these luxury vehicles with one designed on a wooden subframe that surrounds the vehicle from door to door. The wheel and control functions are hidden behind a hinged dash panel and appear only at the driver's command.

Oliver Hoffmann, member of Audi's board for development, says the Grandsphere Concept EV shows how the industry should rethink its entire design process for EVs and autonomous driving. "Highly autonomous driving is a game changer because it means we are developing and designing cars from the inside out," explained Hoffmann.

Automated driving at level 4 transforms the cabin into a spacious luxury experience without a steering wheel, pedals and displays. The front row becomes a ‘First Class Lounge’ with massive space, a clear view and access to all functions of the holistic digital ecosystem.

Most of the Grandsphere Concept's functions are controlled by gestures, voice commands or a distinct look from the driver that is picked up by the vehicle's sensors. With drivers freed from the task of controlling the vehicle, Audi designers equipped the Grandsphere with front seats that recline up to 60 degrees, allowing front-row passengers to fully relax as the vehicle drives, and entertaining them with on-screen music or videos. wide. Audi says the interior turns the car into an "experience device".

“With autonomous steering, one key element changes drastically: the driver doesn't need to have the steering wheel in his hands all the time. This turns the car into a waiting room," Hoffmann said. "We give the customer time to relax, work, play. The car becomes the biggest mobile device you can imagine. And that offers huge new possibilities."

Audi Grandsphere Concept EV is based on the future Premium Platform Electric (PPE) developed jointly by Porsche and Audi. The Grandsphere Concept EV has a wheelbase of 3.19 meters and a short overhang at the front. The two electric motors transfer power to all four wheels and generate an output of 710 hp and peak torque of 960 Newton meters. This means that the car can accelerate from 0 to 100 kmph in just over four seconds.

The battery unit has a gross capacity of 120 kilowatt hours. Enough energy to give the sedan a maximum electric range of 750 kilometers. Like the E-Tron GT and the Porsche Taycan, the Grandsphere also has an 800-volt architecture from Rimac, which is capable of DC charging with 270 kilowatts. The battery can be recharged from 5 to 80 percent in less than 25 minutes.