Hyundai began production at its India facility near Chennai in September of 1998 and has since made it into a major hub for production as well as exports.From first-generation of Santro to the Creta, Venue, the recently-launched Alcazar and more, Hyundai has expended its India product portfolio.
By : HT Auto Desk
| Updated on: 30 Jun 2021, 03:18 PM 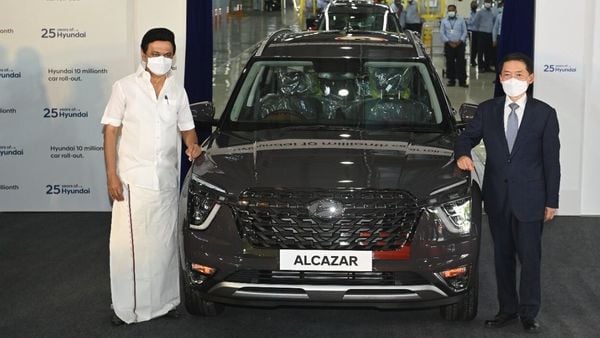 Hyundai Motor India on Wednesday announced the roll-out of 10 million cars from its Chennai-based production facility. The newly launched Hyundai Alcazar SUV has become the 10 millionth car to roll out of the production line at HMIL’s plant in Sriperumbudur.

Hyundai began operations at the Tamil Nadu facility in September of 1998 as its first integrated car manufacturing facility outside of South Korea. Over more than two decades, the facility has seen the roll out of a number of popular models - from first-generation of Santro to Creta, Venue , the recently-launched Alcazar and more. The facility not only serves to cater to the local demand but has also emerged as a major hub for overseas markets. Hyundai is currently the largest exporter of passenger vehicles from the country with over two lakh units of Creta and Venue SUVs having been shipped to foreign markets.

The launch of the Alcazar SUV in India, before anywhere else in the world, also means that the market here is likely to remain crucial for Hyundai. There is a possibility that Alcazar SUV is exported to overseas markets at a later date from the Chennai facility. That it is this vehicle that became the 10 millionth unit here, therefore, is hardly surprising. "This historic milestone of the 10 millionth car roll-out is a testimony of Hyundai’s commitment towards the Make in India initiative," said SS Kim, MD and CEO at Hyundai Motor India Limited. "Furthermore, it also showcases our vision of boosting the socio-economic development in the state of Tamil Nadu and making the country more self-reliant."

The Alcazar is basically derived out of the same DNA as the existing Creta SUV. It has been aimed at buyers seeking to upgrade to a bigger six-/seven-seat SUV. It is also more generously kitted in terms of comfort and convenience features.

With Alcazar, Hyundai is trying to replicate the success of Creta. While there are some certain visual similarities between the two vehicles, the Alcazar is obviously bigger in terms of dimension, alongside sporting a more powerful petrol motor.

In just about a week since bookings for Alcazar were opened, Hyundai announced it has received 4,000 bookings for its new SUV. (Find more details here)