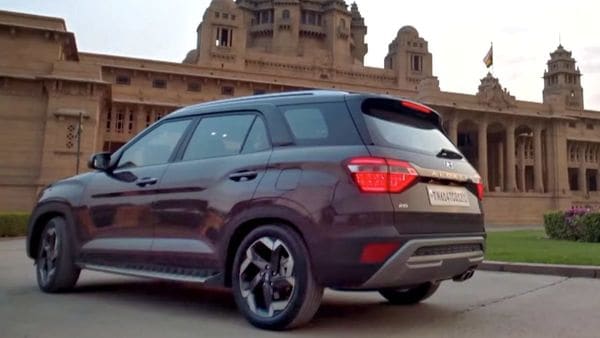 Hyundai Alcazar is fighting in the three-row SUV space.

Hyundai Alcazar was officially launched in India on Friday at a starting - and introductory - price of ₹16.30 lakh, going up to ₹19.99 lakh (ex showroom prices). This is the first time that Hyundai has dived into the three-row SUV space in the country and Alcazar competes in a still tight-knit space which also features Tata Safari and MG Hector Plus. What's interesting is that just about a week since bookings for Alcazar were opened, Hyundai informed it has received 4,000 bookings.

Underlining that unlike Creta, Alcazar is fighting to create a new space in the Indian auto market, Hyundai said it was a positive start to the reception for Alcazar which is offered in three broad variants - Prestige, Platimun and Signature. The car maker added that bookings are near equal for all of these three variants.

Alcazar is offered with both petrol and diesel engine options. So, there is a 2.0-litre petrol motor and a 1.5-litre diesel motor. Hyundai informed that 55% of the bookings so far are for the diesel variants.

Then there is the choice between six and seven-seat layout. Most have preferred the six-speed layout even though there is sizable interest in the seven-seat version as well.

In the toss up between automatic and manual transmission, 65% prefer the former.

Hyundai also added that it was a well-thought-out decision to not offer a no-frills base model because it expects the target audience of Alcazar to expect certain high-end features from the Prestige variant up. SS Kim, MD and CEO at Hyundai India, is confident the SUV will find its intended mark. "Alcazar will fortify our leadership position in the SUV segment and perfectly complement our line-up of Venue, Creta, Kona Electric and Tucson," he said in a press statement issued by the company. "Hyundai has entered a new segment and we aim to redefine premium travel experiences for our customers across the country.