The teaser sketch shows the side profile of the Volkswagen Amarok with a chunk of plastic cladding on the wheel arches.The upcoming Amarok will reportedly be offered with option of diesel engines, including a potent V6 TDI.
By : HT Auto Desk
| Updated on: 15 Jan 2022, 14:16 PM 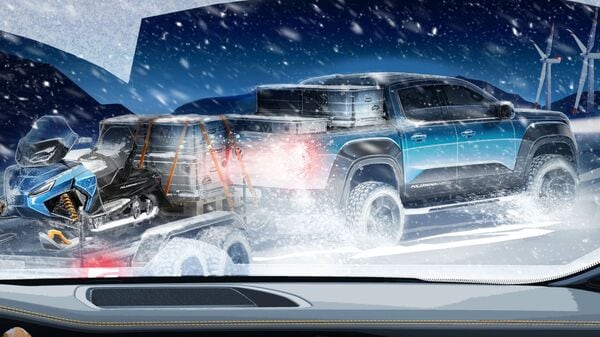 Volkswagen has released yet another teaser of the Amarok pickup truck which can be seen mastering the winter blues while carrying lots of weight behind. The vehicle, based on the Ford Ranger model, is set to make a debut in the coming months.

In the digital sketch shown in the teaser, one can see the Amarok's side profile with a chunk of plastic cladding on the wheel arches and a raised ground clearance. The pickup can be seen riding on winter tyres and has a considerable amount of suspension travel to tackle all kinds of terrains. The company has earlier revealed that the upcoming Amarok model will be bigger in size.

Even in winter and with large loads, difficult country tracks or off-road terrain are no problem for the #Amarok. The latest generation of #VWCV's pickup will have its premiere this summer - and comes with a new design and numerous innovations. #WeTransportSuccessFreedomFuture pic.twitter.com/35XmDDAbV6

The upcoming Amarok will be offered with option of diesel engines, including a potent V6 TDI, Motor 1 reported. There could be other powertrains available depending on the market that it is being offered in, just like how the new Ford Ranger is due to be offered in some countries with a petrol unit – the EcoBoost 2.3-liter four-pot.

Earlier teaser images of the new Amarok released by the company revealed the robust visual appeal of the vehicle thanks to its dominant front fenders, chunky side body cladding, prominent roof rails, pronounced wheel arches and towing hooks in the front and back. The vehicle's interior, too, appeared to be designed and built for the outdoors with dark upholstery shade. Its main screen gets a portrait mode and there are physical buttons visible under it.