The sale of the new 2023 Toyota Sequoia will begin this summer in the international markets.The full-size SUV from Toyota packs a 3.5-litre iForce Max twin-turbocharged V6 hybrid engine.
By : HT Auto Desk
| Updated on: 26 Jan 2022, 03:37 PM 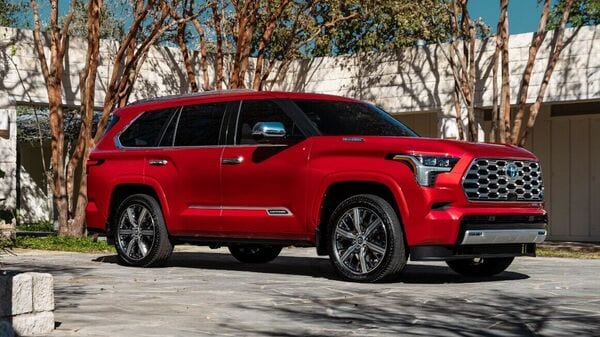 Toyota Sequoia has been launched in both TRD Sport and the TRD Off-Road options.

Toyota has revealed the all-new 2023 Sequoia SUV for the global markets. The full-size SUV from Toyota packs a 3.5-litre iForce Max twin-turbocharged V6 hybrid engine. The new model comes based on the same body-on-frame platform as the 2022 Toyota Tundra and weighs close to 9,000 pounds (4082 kg), which is a 22% improvement over the prior model.

Inside, the cabin gets very spacious layout with some rather boxy interior design elements. The centre stage on the dashboard is taken by either a large eight- or 14-inch touchscreen. There are also massive AC vents, and the optional captain seats for the second row. Moreover, the company has also provided option for the third row to slide six inches for more cargo flexibility at the rear.

(Also Read: Toyota to extend production halt in Japan amid a surge in Covid cases)

The SUV has been made available in two beefier TRD options as well. There is TRD Sport and the TRD Off-Road. Both the options get Bilstein shocks and TRD-tuned springs, but the latter additionally sports off-road features like a multi-terrain monitor, a selectable locking rear differential, and crawl control. Also opting for TRD also brings along new wheels and TRD exterior enhancements.

Under the hood sits Toyota's I-Force Max hybrid powertrain and its twin-turbo V6 engine. The overall output from this engine has been rated at 437hp and up to 790Nm of torque. The engine works with a 10-speed automatic transmission.

The company will begin the sale of the new SUV this Summer in the global markets. On the other hand, its India arrival isn't expected anytime soon.

Meanwhile, Toyota has recently accepted that the waiting period for its 2022 Land Cruiser SUV has gone up to 4 years. More details here.