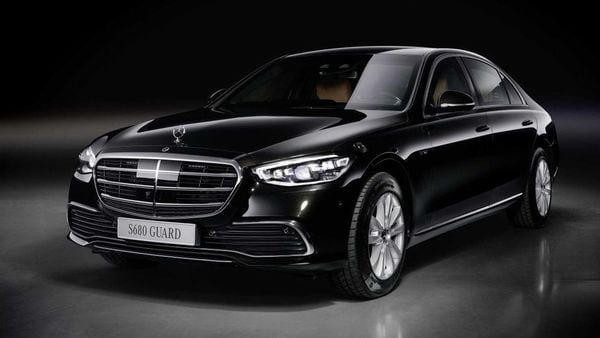 The S-Class S680 Guard luxury saloon has been slapped on with VPAM VR10 certification, which for the record is the highest level of ballistic protection for civilian vehicles.

Mercedes-Benz has rolled out a new 'Gaurd' version of the Mercedes S680 model that is known by the name S680 Guard 4Matic and is made available in a long-wheelbase format. The luxury saloon has been slapped on with VPAM VR10 certification, which is the highest level of ballistic protection for civilian vehicles. This means that the car would be able to withstand gunshots, assault rifle rounds and even explosions.

With this level of safety, the car has been designed specifically for high-ranked people including heads of state, public figures or politicians looking for an extra dose of safety while rolling out in one of the best luxuries provided on four wheels.

What's to note here is that instead of integrating protection onto the standard S-Class, engineers at the three-pointed star have managed to revamp the entire bodywork, thus ensuring a greater level of safety, especially against the previous Gaurd model.

For starters, the car gets 10 centimetres (nearly 4 inches) thick hydraulic windows that are designed to work even when the electronics fail, just in case. Then there are Michelin PAX run-flat tyres that will take the vehicle up to 30 km even when punctured by gunshots.

All the additional protection has added quite a significant amount of weight to the car as the model tips the scales at a hefty 4.2 metric tons or 9,259 pounds. To ensure the performance doesn't drop with the added weight, the car has received recalibrated gearbox and steering wheel. Meanwhile, performance from the engine has been detuned. The V12 used by the Maybach S680 now pumps out 830 Nm (612 lb-ft) when compared to 900 Nm (664 lb-ft) on the regular model. On the other hand, the overall power output remains unchanged at 604 hp (450 kW). The company has electronically restricted the top speed of the vehicle to 118 mph (190 km/h) with an electronic speed limiter. It is also offered with a built-in oxygen tank in case things go drastically wrong.