The 11th generation Honda Civic continues to be powered by a 2.0 litre naturally-aspirated four-cylinder DOHC i-VTEC petrol engine and a 1.5 litre VTEC Turbo four-cylinder engine.
By : HT Auto Desk
| Updated on: 29 Apr 2021, 11:14 AM 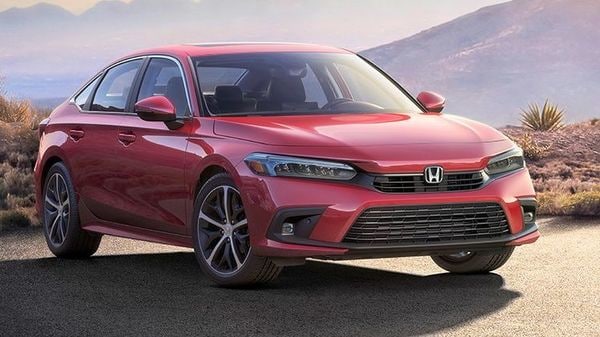 Honda has unveiled the 11th-generation of its popular Civic sedan. The 2022 Civic comes with new design that was first showcased in November last year. The 2022 Honda Civic also gets updated interiors, improved powertrain and several features.

The design of the 2022 Civic sedan has become simpler than its predecessors with fewer character lines on the body and is in line with the new HR-V that was officially unveiled a few days ago.

The first thing that catches the eyes is the hood which has now become longer to help create a more dynamic and sporty look. Honda said its designers have pushed back the A-pillars by 1.96 inches and helps make the bonnet look longer. The sedan also has sharp edges that run along the profile and visually connects the front with the back.

The new Civic sedan now stands 33 mm longer at 4,674 mm and the wheelbase has also been increased by 36 mm to 2,736 mm. The height and width remain unchanged.

The interior of the 2022 Civic sedan also gets upgraded design. The air vents get decorative strips and the screens have replaced some of the physical buttons. The digital instrument panel is 10.2 inches wide, while the standard dimension of the free screen of the advanced infotainment system in the middle of the dashboard is 7.0 inches.

Optionally there is a larger 9.0 inches, as well as Bose premium audio system, while the package of assistance systems will be complete, which includes an advanced cruise control.