Volkswagen Tiguan facelift ditches diesel for a refined petrol engine and is quite a lot of fun to drive.While packed with features in one fully-loaded trim, the latest Tiguan is also a pricey proposition, leaving its direct rivals far behind in the price comparison.
By : Shubhodeep Chakravarty
| Updated on: 24 Dec 2021, 10:07 AM 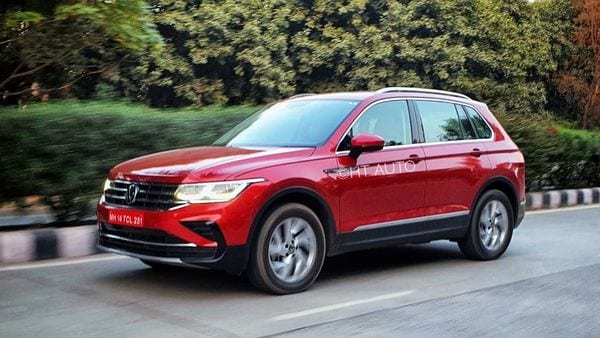 The latest Tiguan takes a bigger aim at some of the lower-end offerings from luxury car makers in India.

Volkswagen Tiguan has been in the Indian market for some time now, eliciting mixed response from customers who have mostly shown a leaning towards the SUV body type. But unlike younger sibling Taigun that is aimed straight at the mass market, the Tiguan has always appeared a product that is directed towards an elite group of buyers who tend to look beyond brute machismo or svelte sportiness in terms of visual cues and drive dynamics. The latest Volkswagen Tiguan facelift appears ready to take this forward while now offering several significant updates to the model it has replaced.

At an introductory and ex-showroom price of ₹32 lakh, the Volkswagen Tiguan is a pricey proposition and there is little arguing against it. But look beyond the asking price and here is an SUV that is unperturbed by what its direct rivals are all about and instead, wants to fight the lower end of the luxury car market. One fully-loaded Elegance trim is testament that Volkswagen is confident that the new Tiguan deserves its price sticker because it is aimed at a niche, possibly aspirational buyer.

Does the 2021 Volkswagen Tiguan have what it takes to shine on its own? Read on:

The biggest update on the 2021 Tiguan is under the hood and so, it is but obvious that its real test lies in its performance credentials. As is the larger trend in the Indian car market, Tiguan slams the door on its 2.0-litre diesel motor and embraces a 2.0-litre turbo petrol unit that produces 190hp and offers 320 Nm of torque.

This clearly means that Volkswagen is leaving anyone out for a premium SUV with a diesel engine out of its showrooms. But for all others, there's much to admire in the present offering. 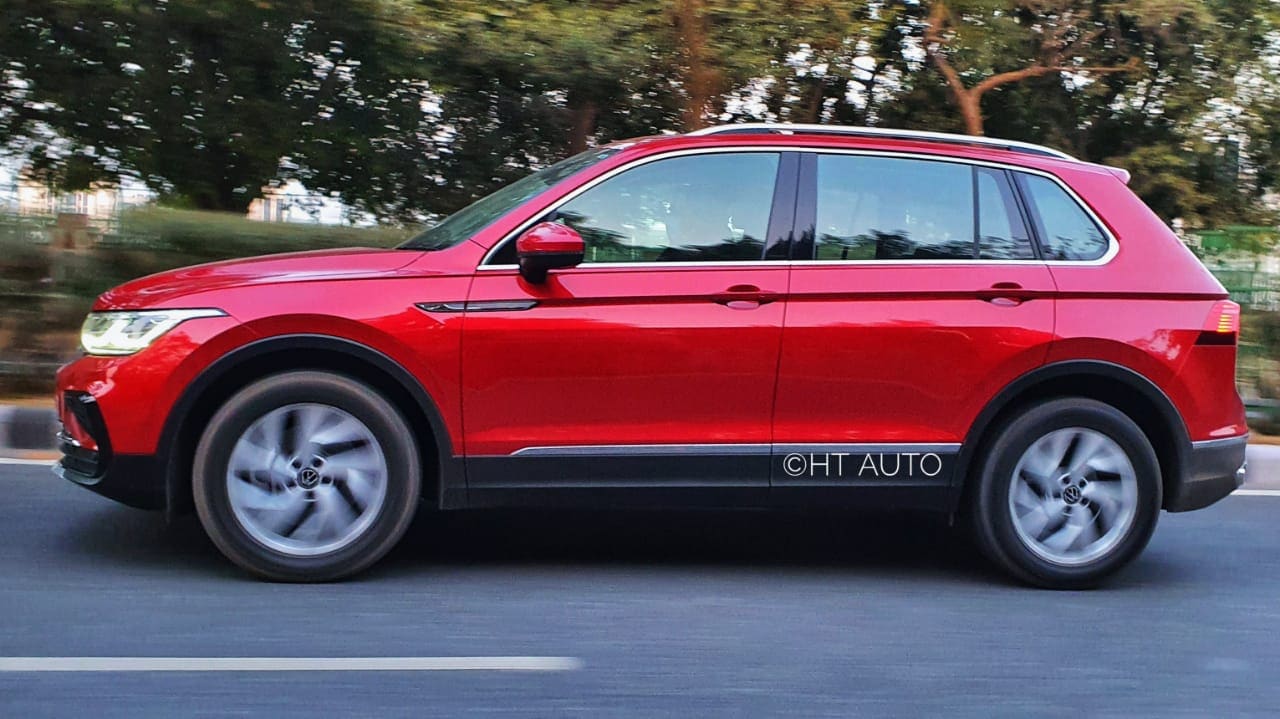 Only the most ardent of diesel engine fans would miss the previous unit inside the Tiguan because the current petrol motor sure is capable of handling almost everything that comes its way.

Previously seen inside the now discontinued three-row Tiguan AllSpace, this petrol unit immediately appears even more refined, sporty and eager in the five-seater Tiguan. Here, the whether it is a pull to the three-figure mark on the speedometer or a casual mid-speed day out within city limits, the mature character of the engine shines amply. Of course, don't just crown the engine because the seven-speed dual-clutch auto gearbox is quite the jewel as well as it ticks of numbers effortlessly at the slightest of throttle inputs. It sends power to all four wheels through Volkswagen’s 4MOTION all-wheel-drive system. There is an Eco Mode but just for some extra bit of fun, the Sport Mode lends a youthful touch to this SUV. For most parts though, the Normal Mode acts as a great balance between the two. And when the going may get a bit rough, there is always the reliance on the Off Road and Snow terrain modes. 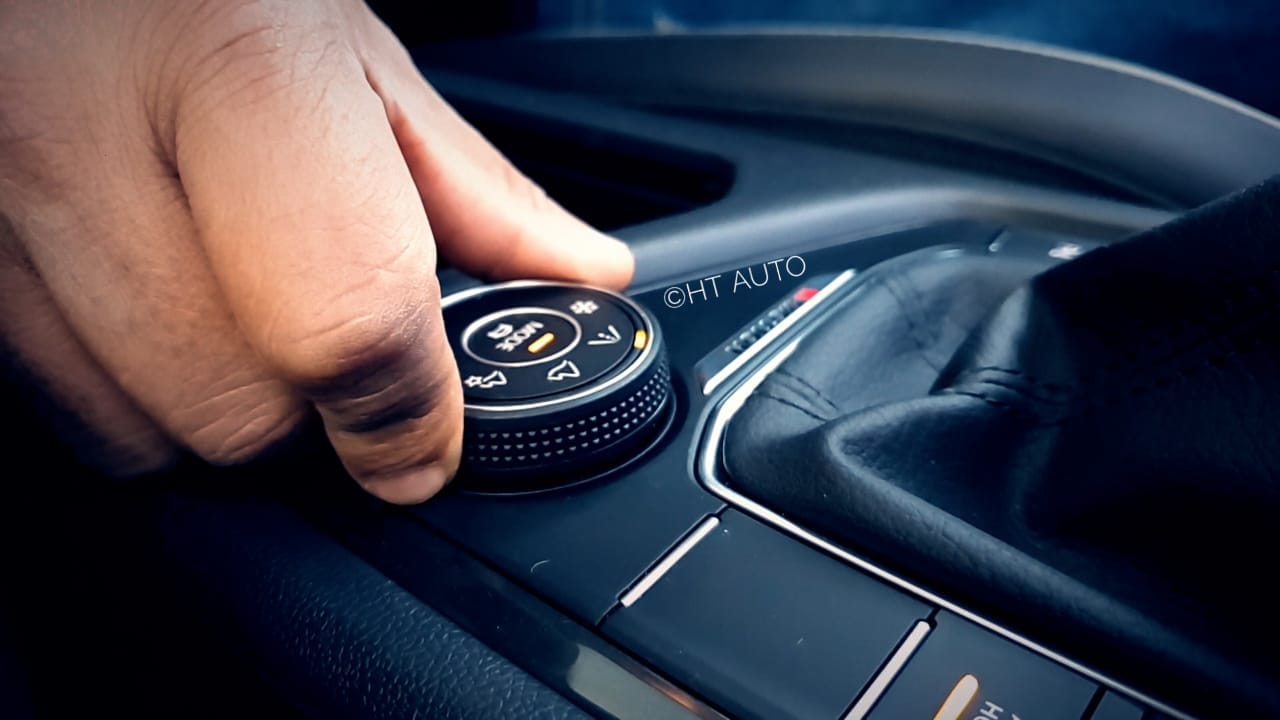 The center console stack gets the terrain and drive mode selection dial, apart from the gear lever and buttons for hill hold and descent control.

On that note, the suspension set up on the new Tiguan remains a bit firm which in the real world translates to a slightly stiffer mid-speed ride experience over road aberrations. But because of the typically well-balanced steering wheel, decent cornering ability and a great control on NVH levels, the Tiguan managed to ace almost any challenge that came its way in Delhi and adjoining highway roads we drove on. 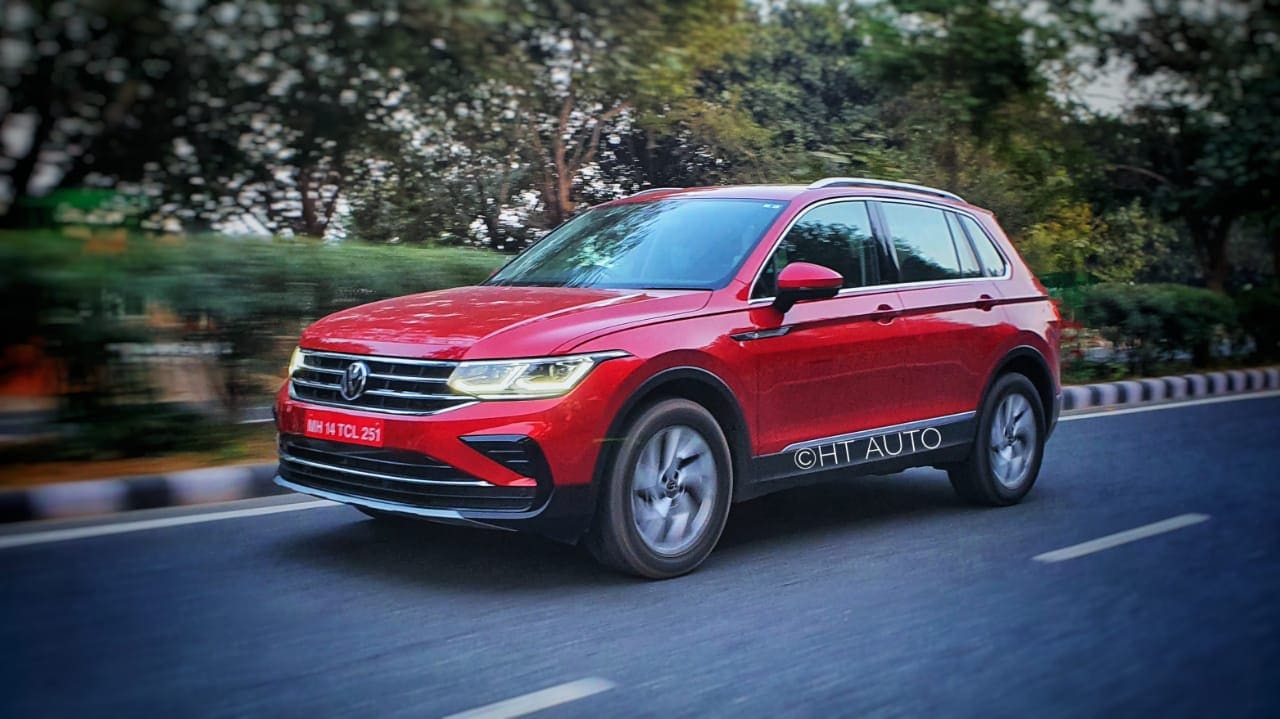 The sprightly nature of the Volkswagen Tiguan on open stretches makes it a fun car to drive.

As the saying goes, don't judge a book by its cover, so is also the case with Tiguan - don't judge this SUV by its looks (alone).

But looks do tend to play an integral part in a car's faring in any market and Volkswagen has given the updated Tiguan just the right reworks to help it retain its original visual character while still offering new elements.

Take the face of the car for instance. The square proportions remain as is but the updated model now gets a new set of sleeker head lights which promise to offer better illumination regardless of terrain and climatic conditions. We couldn't check this claim, however, because we only had the vehicle till late afternoon. 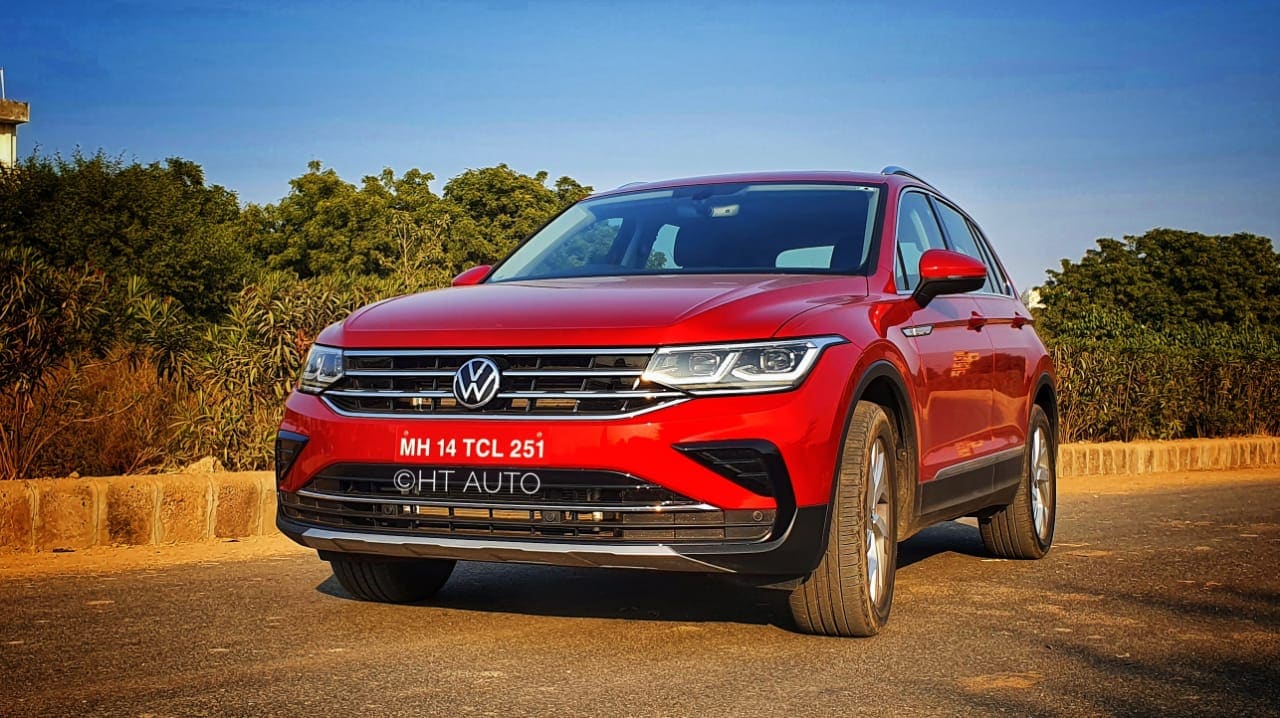 What was evident though is a reworked front grille and an updated grille to lend the face of the Tiguan a more contemporary touch.

Over at the side, the design on the 18-inch alloys have been updated while the rear profile too gets LED tail lights which now boast of dual illumination. 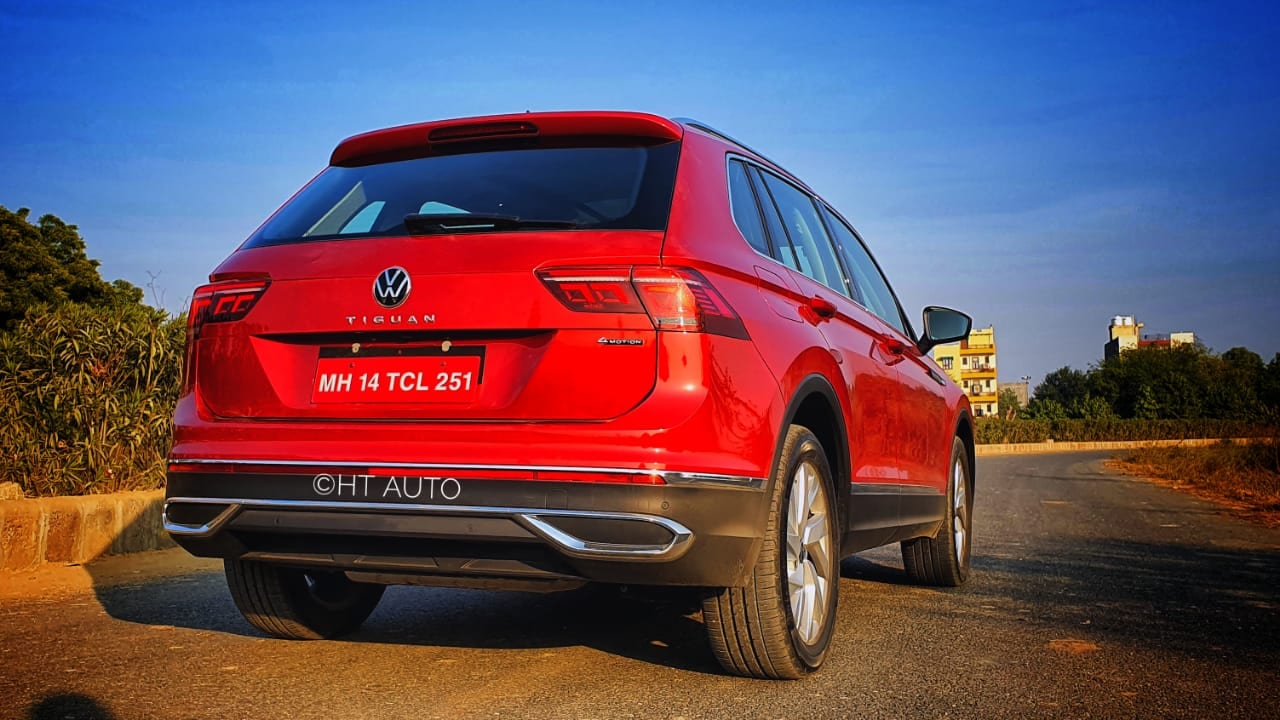 The Tiguan from Volkswagen gets minor chrome additions around its body.

What this means is that when braking, the illumination has a pattern theme which not only looks unique but because of it, could enhance safety too.

The Tiguan was never really designed to stand out among muscular SUVs. Neither was it ever projected as a sporty offering with captivating curves and creases. Instead, here is still a vehicle that is undeniably elegant, undeniably European and undeniably Volkswagen.

Step inside and the same Volkswagen flavour is omnipresent all over inside the new Tiguan. While the overall layout of the dashboard is identical to the previous models, there are also some very noticeable updates here. 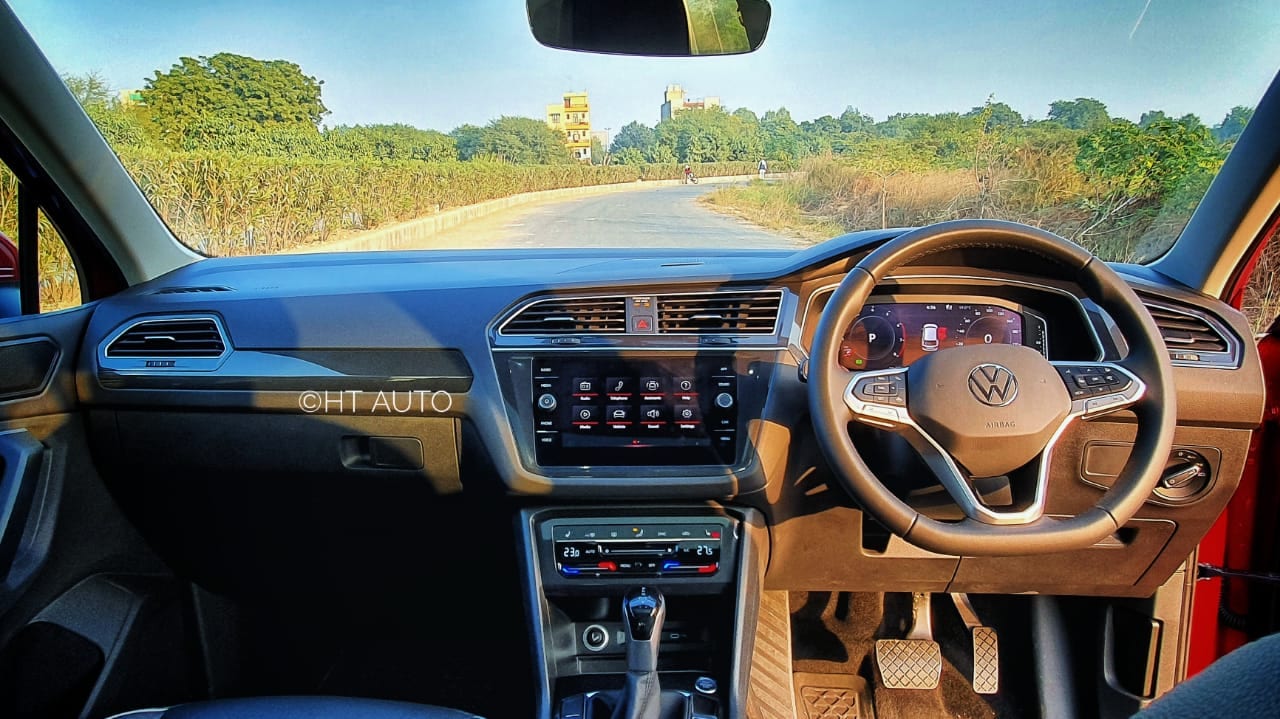 While there is some use of hard plastics, the overall quality of fit and finish is mostly pleasing.

Take the touch panel to control the air conditioning, for instance. Gone are the physical controls and in comes this panel to up the premium quotient of the vehicle. Then there is the a fresh flat-bottomed steering wheel design too - also seen in the Taigun - complete with the new VW logo.

The eight-inch main infotainment screen may seem like it is small, numerically speaking, but it sits nicely with the overall front cabin layout of this vehicle. It is responsive to touch, supports gesture swipes and is quite bright even under direct sunlight. Marks, however, need to be taken off because it does attract a whole lot of fingerprint and at least in our review unit, the fitting into the frame was less than perfect and was quite evident when the sun rays shone through.

I also don't get why Volkswagen would choose to pamper the driver with switches to adjust the seat but leave the front passenger to still use muscle power. I mean if it is 'premium' tag we are going for, just add the switches and memory function here too. 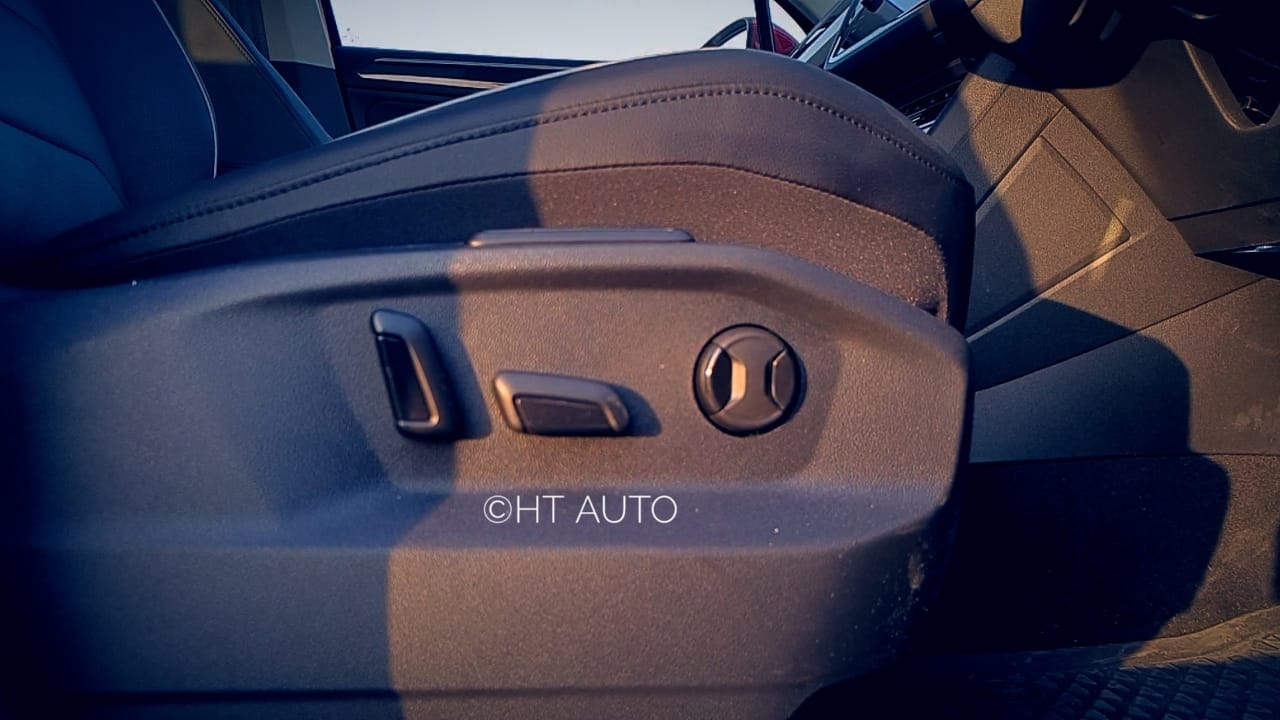 Only the driver-side seat can be electronically adjusted and positions can be stored through the memory function available too.

Thankfully, both front seats get heating functionality which was an absolute blessing in the cold wave conditions in Delhi at the time of our drive. I mean even at 9 am, the temperature was in single digits and to have the heated seats meant much. Thanks VW.

But Delhi also has an equally severe summer and seat ventilation is definitely a big miss in the Tiguan for me. So, no thanks VW.

Overall though, there is much to like in the cabin of the new Tiguan. The 10-inch customizable driver display, the 30-colour ambient lighting, a large panoramic sunroof and three-zone climate control - all help to recreate a pleasant cabin that isn't overpowering for the senses.

Step into the rear seats and the pleasant experience continues. There is generous amount of leg and knee room for passengers here. The under-thigh support and headroom should also be sufficient for tall passengers. The level of seat cushioning is great and the recline angle on the backrest of the seats here are par for the course as well. 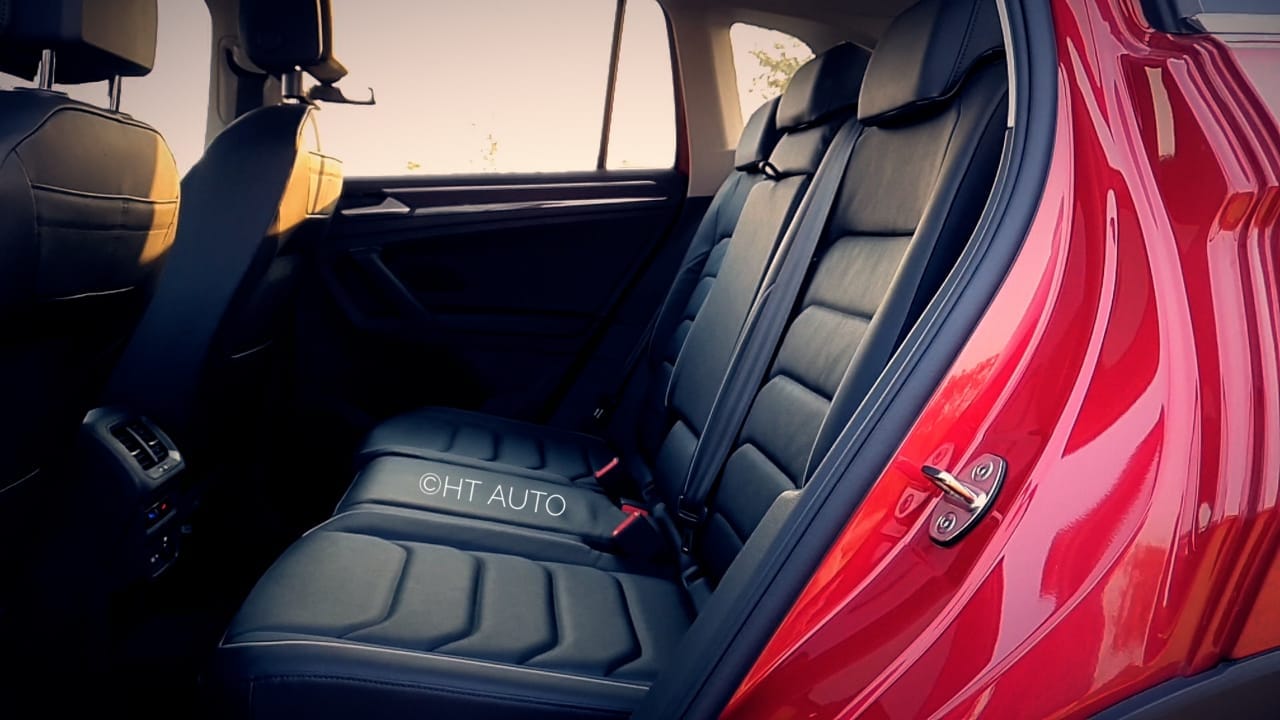 The center console jutting back does eat into the leg space for the passenger in the middle but there is generous amounts of space for the two on either side.

But the fifth passenger is likely to find him or herself massively shortchanged because the hump on the floorbed continues to eat into leg space while the center console - complete with air vents, Type C point and 12V charging socket - juts back by quite a bit. And I am also not very confident three adults will be able to have much shoulder room for comfort on longer journeys.

At least one won't have to compromise on luggage for those long journeys because the Tiguan has 615 litres of boot space. The boot opens at the press of a button inside the cabin, on the FOB or even through a leg swipe.

The Tiguan will be locally assembled at the company plant in Aurangabad which, ideally, ought to have meant a price lower than what is being asked. The petrol variants of Hyundai Tucson and Jeep Compass are significantly more affordable than Tiguan while even the diesel variants sit lower on the price structure. At ₹32 lakh, this Volkswagen is definitely expensive. 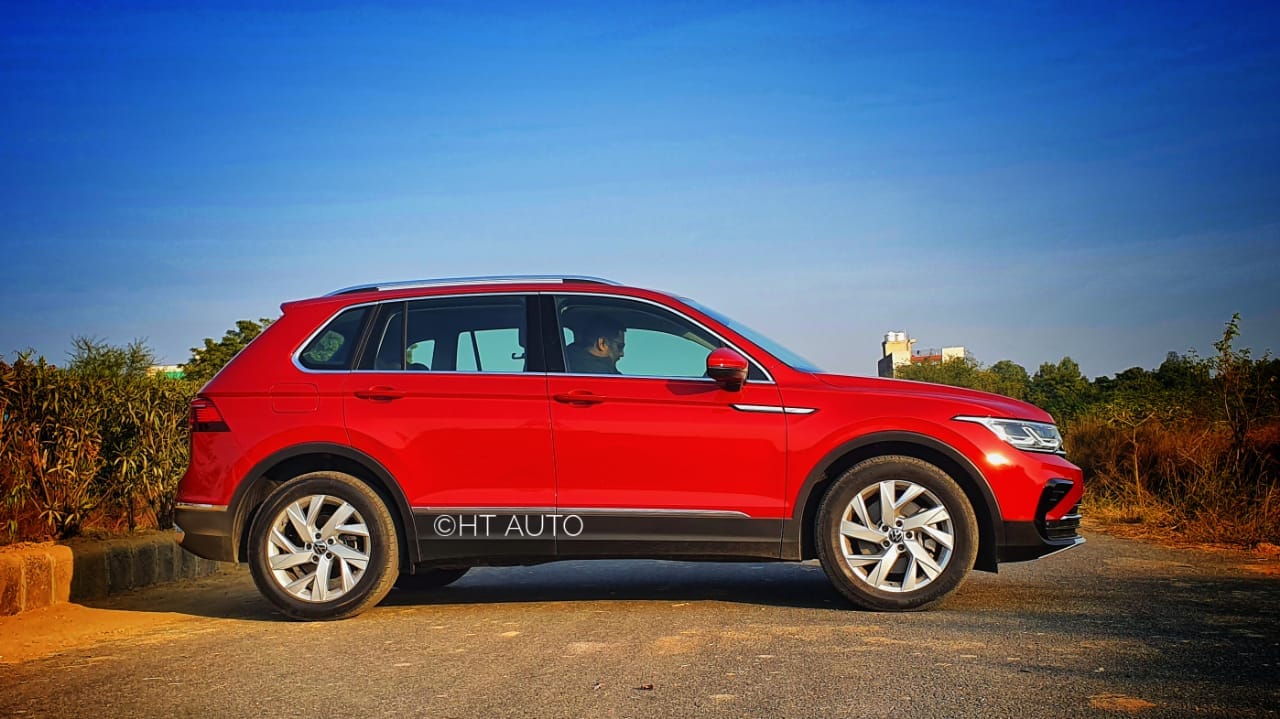 The new Tiguan has an ARAI-certified mileage of 12.65 kmpl.

But one fully-loaded variant means one can at least get the plethora of features that new-age customers have become accustomed to, along with a drive quality that is quite unmatched by any of Tiguan's direct rivals.