Yamaha NMax 125 Star Wars edition: All you need to know

Yamaha NMax 125 Star Wars edition has been revealed in Brazil.Save for the exterior sticker updates, there is no other change on the scooter.There are two liveries present on the Star Wars edition of the scooter representing the Rebel Alliance and Galactic Empire.
By : HT Auto Desk
| Updated on: 22 Jun 2021, 05:36 PM 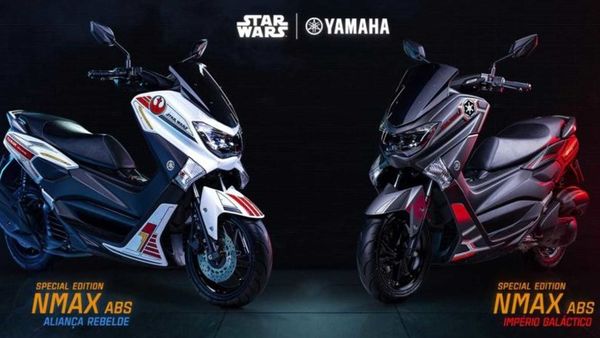 Save for the exterior sticker updates, there is no other change on the NMax scooter.

Yamaha NMax 125 has been introduced in a new Star Wars edition in Brazil. Save for the new alluring exterior paint livery, the rest of the details on the scooter remains unchanged. There are two paint liveries present on the Star Wars edition of the scooter representing the Rebel Alliance and Galactic Empire within the blockbuster movie franchise. While the former is available in a white paint scheme, the latter representing the 'dark side' is featured in a black/red scheme.

The company has also recently unveiled the 2021 edition of the NMax 125 scooter on which the new Star Wars edition is based. Save for the exterior sticker updates, there is no other change on the scooter. It continues to use a 124 cc, liquid-cooled engine which complies with the latest Euro 5/ BS 6 emission norms. In the newest avatar, this powertrain also delivers slightly more overall output which is 11.8 bhp and 11 Nm.

It shares the features and equipment kit with the existing model. It gets an LCD console with a smartphone Bluetooth connectivity feature. Other highlights on the new scooter include an engine start-stop system and TCS (Traction Control System). For the record, TCS is only limited to higher-spec scooters currently and NMax is one of the rarest offerings in the segment to be blessed with this safety feature.

While the NMax Star Wars edition may never be introduced in India, TVS Motors has previously introduced a special Avenger's edition of its NTorq scooter in India. (Find more details here).