Since Yamaha Aerox 155 MotoGP edition was a limited edition scooter, chances are that it may not be re-launched in the country anytime soon.
By : HT Auto Desk
| Written By : Prashant Singh
| Updated on: 17 Feb 2022, 11:23 AM 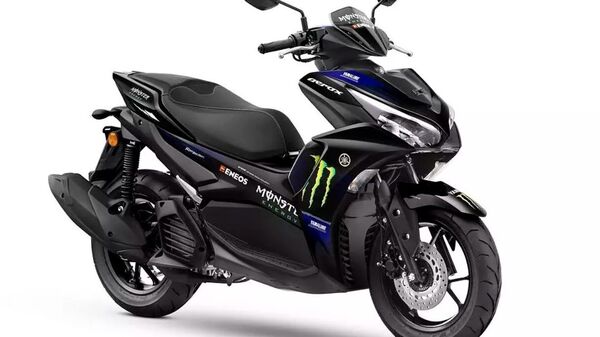 Yamaha Motor India announced the launch of the new Aerox 155 MotoGP motorcycle in the country a few months back. Now the company said that the scooter has been sold out entirely in the country. Since the MotoGP model was a limited edition, chances are that it may not be re-launched in the country anytime soon.

The limited edition Aerox 155 featured the company's iconic Monster Energy graphics found on its MotoGP race machines. Save for the exterior changes, the scooter shared the mechanical and feature details with the standard model. It is currently available in three body colour options namely metallic black, racing blue, and grey vermillion all of which retail at ₹1.32 lakh (ex-showroom).

The Yamaha Aerox 155 sources power from the YZF-R15 inspired 155cc, liquid-cooled, single-cylinder engine that comes with Yamaha's patent Variable Valve Actuation (VVA) technology. The engine is rated to develop 14.79bhp of maximum power and 13.9Nm of peak torque. Some of the key features of the scooter include its full-LED headlamp and tail lamp, smart motor-generator for silent starts, ABS, a side-stand cut-off system, and a Bluetooth-enabled LCD. It also rides on large 14-inch alloy wheels which contributes in making it a good handling machine.

Meanwhile, Yamaha Motor India has also recently announced price hike on its motorcycles and scooters in the country and the latest price increment also includes its new Aerox 155 moto scooter. Following the latest price hike, the R15-based scooter has become expensive by ₹2,000.