TVS iQube is one of the most affordable e-scooters present in India today.iQube e-scooter by TVS misses out on the quick charging, but that's said to be fixed soon.iQube comes with a reverse assist function.
By : Prashant Singh
| Updated on: 29 Jul 2021, 11:01 AM

TVS iQube is one of the most affordable e-scooters present in India today.

Apart from the main players - TVS iQube, Bajaj Chetak and Ather 450X, the electric two-wheeler segment has been witnessing a lot of action lately with a range of comparatively new (and inexperienced) EV makers claiming to come up with a "revolutionary" offering to transform the way we commute. But within the span of the last few years, only a handful of firms have really proved their worth in the electric two-wheeler market which has a lot of potential but is very selective at the moment.

The TVS iQube was announced a few years back and it stands as one of the few most notable offerings in the segment today. It won't be a mistake to stage it as the company's most technically advanced scooter for not just the fact that it uses smartphone connectivity, but also for its electric motor that doesn't require conventional fuel. It marks the beginning of an era for TVS that has set sight straight on the battery technology, with a number of products to follow in the future.

First things first, ever since the iQube was introduced, it has been subjected to polarising comments. While some find it futuristic, others simply do not. For me, it’s right in the middle. The overall design of the iQube has been kept rather simple to attract a wider set of buyers.

The use of a horizontal LED headlamp and tail lamp give it a modern look. And the front LED DRL placed over the head along with bold-black panels across the front apron also make it likeable to look at. 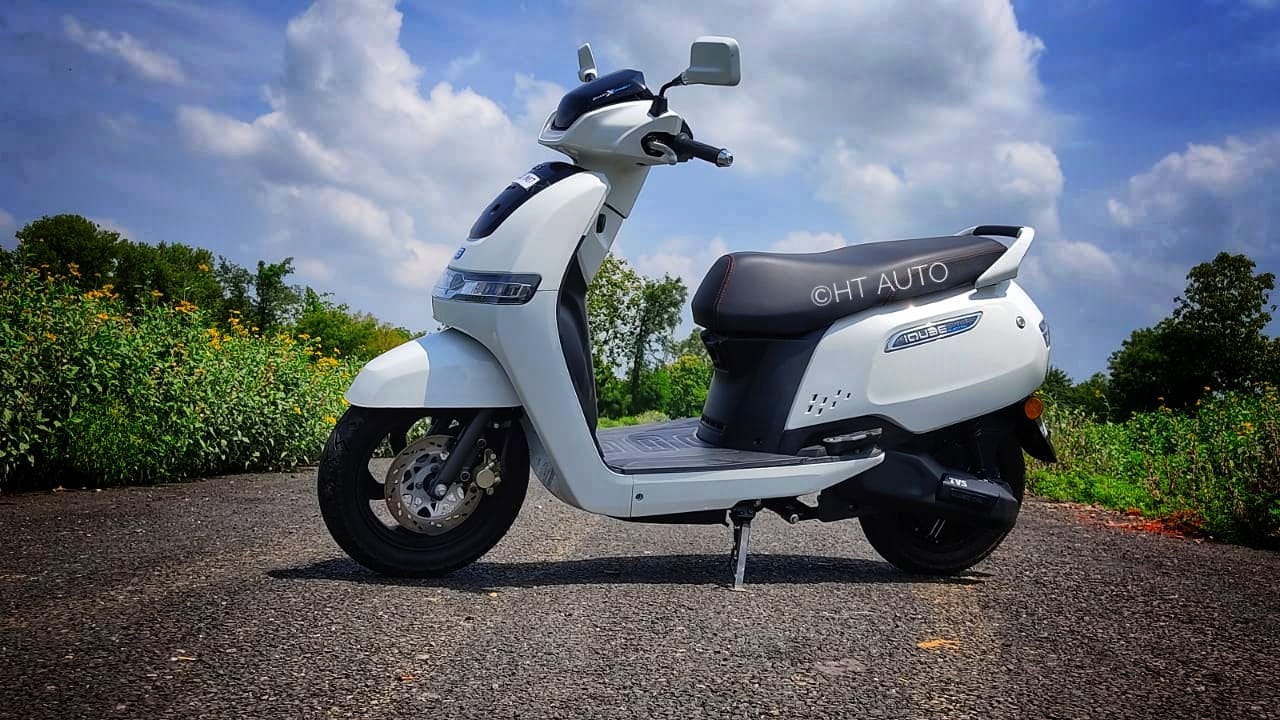 The overall design of the iQube has been kept rather simple to attract a wider set of buyers. (HT Auto)

At the bottom, the machined alloys look nicely finished. Come to the side and you’ll see a kind of small net pattern near the footboard and then there’s iQube logo sitting over the side body panels. It also gets an 'Electric' badging that lights up in blue colour and is placed at the panels of the hub-mounted motor. Over the rear, there are horizontal lights and a big grab rail for the rear pillion.

One of the key highlights of the scooter is its large-sized LCD display that appears to be premium, especially when compared to the direct rivals. While it does take some time to load up when you put the scooter on charge, but that's mainly because it takes a few seconds for the adapter to initiate charging.

Other than that, all the data is displayed in a very clear and readable format and the screen also remains bright under broad daylight conditions. The screen also changes colours when the riding modes are switched. 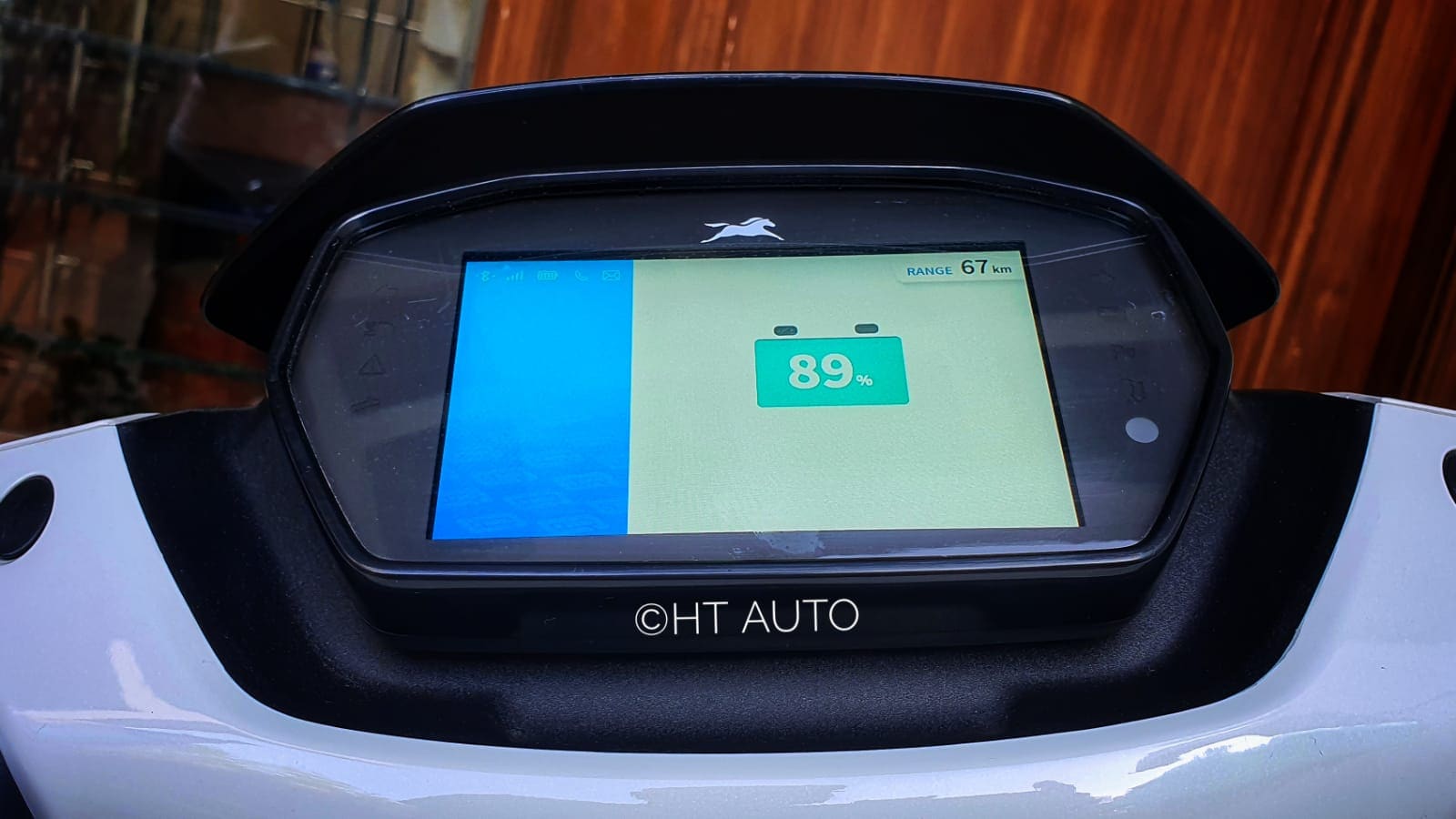 TVS iQube's screen gets Bluetooth connectivity which allows it to be paired with the dedicated iQube smartphone app.

It gets Bluetooth connectivity which allows it to be paired with the dedicated iQube app, along with the Bluetooth function. It also shows incoming call alerts, SMS notifications and turn-by-turn navigation on the screen. The app also features Geo-fencing, trip data recording, battery charge status, range and a lot more.

There is no multi-function key switch that unlocks the under-seat storage on the scooter and you’ll have to get up from the seat to unlock it using a dedicated key space on the left side of the body panel, as found on regular scooters. Pull it open and you’ll see a decent space for all the regular paraphernalia. While this space is decent for a medium-size helmet, a full-size lid can't be placed here. Moreover, it gets a USB charging slot to charge your phone on the go and also a small light. 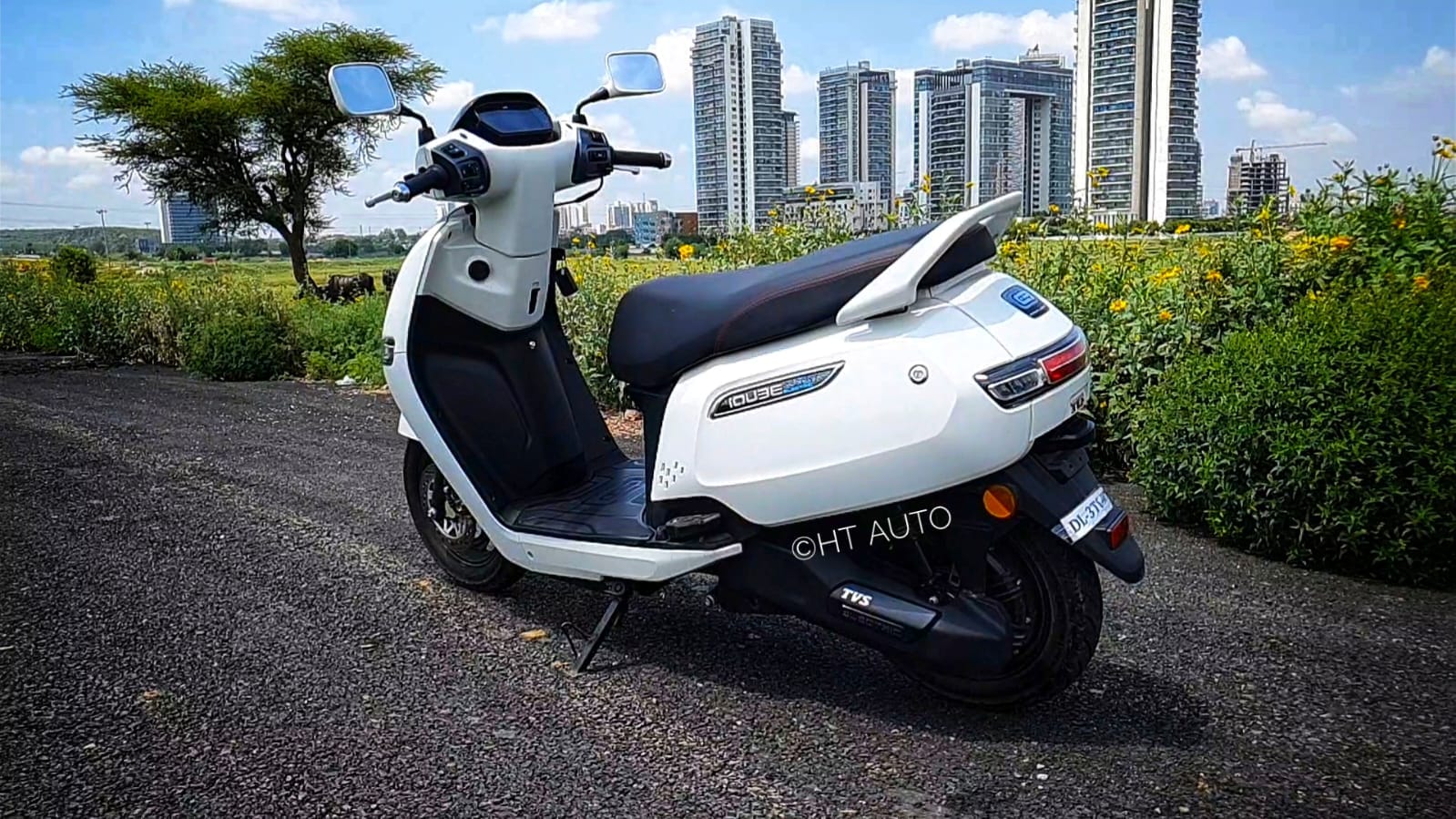 The electric scooter gets a bosche-made hub-mounted motor with a peak power output of 4.4kW. (HT Auto)

The electric scooter gets a bosche-made hub-mounted motor with a peak power output of 4.4kW. Tap on the electric start button and you won’t hear or feel anything until you twist the wrist. The iQube's throttle response feels quick and is definitely not laggy, even during the roll-on speeds. Also, what's needed to be pointed out is that the throttle off-on transition on the iQube is very soft and convenient, and the regenerative braking is also not direct and happens minimally in the background - contributing to the scooter's smooth throttle response.

The iQube gets two modes - Economy and Power, which can be selected with the tap of a button, even while riding. In Economy mode, you can go up to 45kph in terms of top speed, with a full charge range of 75km. In the Power mode, you can do a top speed of 80 km but the range is said to go down to 55km here. Overall performance in Power mode is snappier and the difference is felt throughout the ride.

The scooter also gets parking assist feature that restricts the speed while parking in tight spots, moreover there is also a reverse assist function, which is basically a reverse gear. 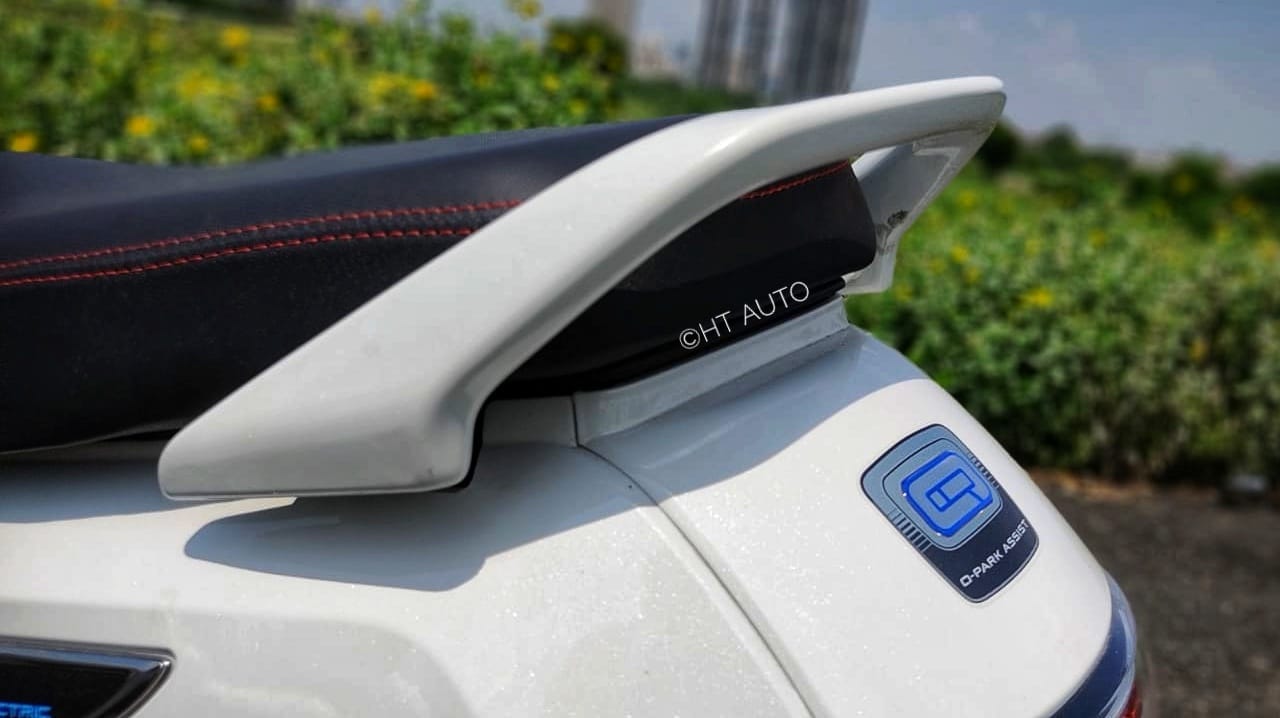 The TVS iQube e-scooter gets a parking assist feature that restricts the speed while parking in tight spots, moreover there is also a reverse assist function. (HT Auto)

The iQube comes with a non-removable battery which is split into three different packs, with one of them positioned under the footboard. This means that it can not be switched or replaced with a fully charged pack when required. But it is something that's not really required by the e-scooters at the current stage. What's needed is a longer range and the ability to charge quickly. Speaking of which, the iQube is offered with a standard home charger which consumes a minimum of 6-7 hours to fully charge up the batteries. Sadly, there is no quick charging on offer which can be a concern for some. Albeit, the company is said to be working on adding the feature, but for the existing units, it is simply not there.

As far as everything else goes, it handles and performs exactly like a light weighted and easy-going traditional ICE-powered scooter. 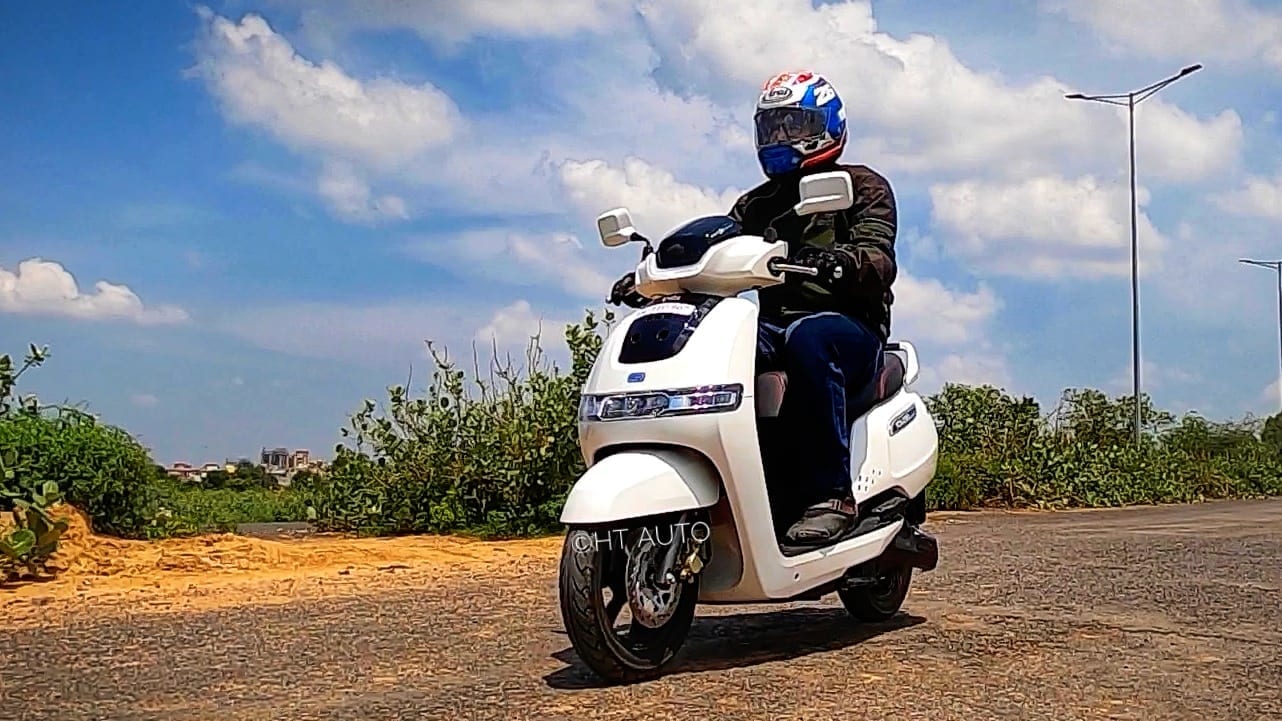 At a little over ₹1 lakh on-road, Delhi, the TVS iQube is currently one of the most affordable and promising EVs on offer at the moment. It does have some important bits missing, especially the unavailability of fast charging and the limited range it offers. But when looking at it from the perspective of TVS' very first full-fledged electric product, it appears to make sense.

The iQube comes out as a very thoughtfully put together EV that offers a little bit of everything.

But the question remains - Is it capable of replacing your traditional ICE scooter? I think there’s still some time in that. Not until a longer range is attained or quick charging is fixed!