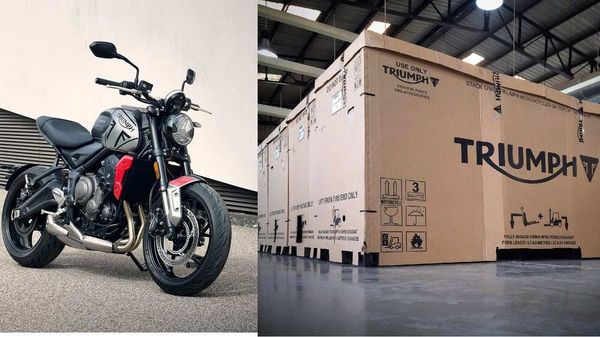 Trident 660 is going to be placed as one of the most affordable models in Triumph India's lineup.

Triumph Motorcycles is gearing up to launch the new Trident 660 middleweight naked bike in the country on April 6th. Now the UK-based premium bikemaker has shared an image of the bike landing on the Indian shores. The company posted the image on its official Twitter handle with the caption "Just arrived. Guess what?"

Goes without saying the very next bike launch from Triumph is the Trident 660's and the model under the cover box is also obviously the same bike. Official pre-bookings of the new Trident started in India in late-2020.

Triumph Motorcycles has told HT Auto in the past that the Trident is going to be placed as one of the most affordable models in its lineup. Thus, expect it to be placed somewhere in the range of ₹7 lakh to ₹7.5 lakh (ex-showroom) and compete against the likes of the Kawasaki Z650 and the recently launched Honda CB650R.

Despite being one of the most affordable bikes in Triumph's portfolio, the Trident will be a very well-kitted bike for its division. It will make use of features such as riding modes- Road and Rain, switchable traction control, and throttle-by-wire. It will also get a TFT screen along with a Bluetooth module for phone, message, and GoPro control which is optional.

At the heart of the new Trident will sit a 660 cc, inline-three cylinder engine which will push out 79.8 bhp of maximum power and 64 Nm of peak torque. The powertrain will be paired to a six-speed transmission.