Triumph Tiger Sport 660 is expected to go on sale in India early next year.Tiger Sport 660 will be placed as the most affordable, middleweight, adventure-style sports-tourer motorcycle in the company's adventure lineup.
By : HT Auto Desk
| Updated on: 05 Dec 2021, 12:40 PM 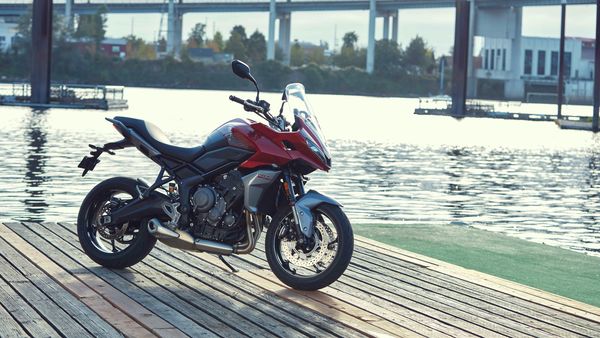 The new Tiger Sport 660 will be placed as the most affordable, middleweight, adventure-style sports-tourer motorcycle in the company's adventure lineup.

On the inside, the Tiger Sport 660 comes based on Triumph's most affordable roadster, the Trident 660. However, there are some major differences that give the Tiger a different character altogether. It features an all-new design, a different sub-frame, and a longer travel suspension setup which allows it better-touring capabilities.

Some of its main features and equipment include full-LED lighting, two riding modes (Road and Rain), a Bluetooth-ready instrument cluster, a switchable traction control, and ABS.

At the heart of the motorcycle sits a 660 cc, inline-three cylinder, liquid-cooled engine. This powertrain comes mated to a six-speed transmission. The overall output from this engine is recorded at 80bhp of power at 10,250rpm and 64Nm of peak torque at 6,250rpm.

Some of the key rivals to the motorcycle will be seen in the form of the Kawasaki Versys 650 and the Suzuki V-Strom 650 XT.