The Vespa Elettrica has connectivity features which are currently not available on any scooter on Indian roads.
By : Amit Chaturvedi
| Updated on: 10 Feb 2020, 15:46 PM 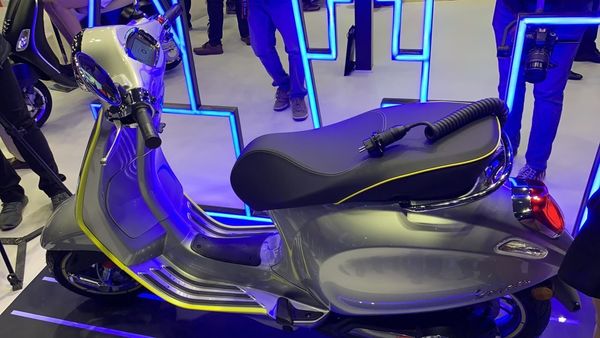 Italian two-wheeler company Piaggio on Thursday showcased the Vespa Elettrica scooter at Auto Expo 2020. The company claimed it has many segment-first features and will change the way Indians ride two-wheelers.

The Vespa Elettrica has connectivity features which are currently not available on any scooter on Indian roads. For example, a rider can connect mobile phones to the scooter and will get notifications about text messages (SMS-es) and calls. The rider can also talk while riding the Elettrica.

Piaggio, however, said that the talking while driving should not be followed and that riders must follow road safety rules. “We at Piaggio are bringing some new features to this scooter, which gives it an edge over its rivals," said Diego Graffiti, Managing Director and CEO, Piaggio India.

The Vespa Elettrica is produced in Italy and demonstrates Piaggio Group’s technological solution for electric mobility, he added.

It comes with a 4.2 kWh Lithium-ion battery that produces close to 6 bhp of power. The scooter takes around 4 hours to charge fully and delivers a range of 100 kilometers when charged fully.

The scooter is expected to be launched in India in the third quarter of this financial year.

Piaggio developed the Vespa back in 1946. The company has a state-of-the-art plant in Baramati, Maharashtra where it manufactures Vespa along with the newly launched Aprilia SR 150, in India.

Aprilia is a sporty flagship brand of the Piaggio Group and has won 294 Grand Prix races in various championships.