Royal Enfield Super Meteor 650 has a stance of a cruiser so the footpegs are forward set. (Photo courtesy: Instagram/happinessperkm)

Royal Enfield's 650 Twins were a hit not only in the Indian market but in the global market as well. So, it made sense for them to introduce more motorcycles that are using the same engine. One such motorcycle will be the Super Meteor 650 which is a cruiser and is expected to get launched by the end of this year or early next year. Super Meteor 650's test mule was recently spotted while it was on a test on Indian roads which helped in getting more information about the production-spec motorcycle.

The test mule of Super Meteor 650 looks very close to the production-spec version. It is very familiar to the Meteor 350, in terms of design. However, there are some beefy elements to the Super Meteor 650 because of which it has more road presence. 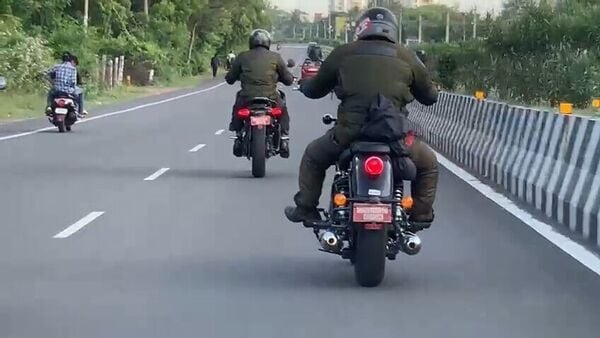 The motorcycle uses circular elements to retain its old-school charm. The turn indicators, rear tail lamp and headlamp have a circular shape. Although, they all do look new. The rear tyre is quite fat, it looks like it has a 150-section.

The exhausts have a pea-shooter design so it is expected that they will have a good exhaust note. The engine casing is now finished in matte black. The engine will be the same 648 cc, fuel-injected, four-stroke, parallel-twin motor that is air-oil cooled. It produces a max power output of 47 hp and a peak torque output of 52 Nm. It is paired to a 6-speed gearbox which gets a slip and assist clutch. Royal Enfield might retune the engine to suit the character of Super Meteor. Having said that the engine is known to feel relaxed and stay vibration free at triple-digit speeds which makes it ideal for cruising.

As of now, it is not confirmed whether the Super Meteor will use the same chassis as Meteor 350 or not. Even if Royal Enfield uses the same chassis, they would need to beef it up to handle the additional weight of the engine and components. According to some sources, the Super Meteor will weigh 80 kgs more than the Continental GT 650. However, nothing is confirmed as of yet.