The special edition Interceptor 650 and Continental GT 650 celebrate 120 years of Royal Enfield with 120 units of both bikes being reserved for markets in India, Americas, Europe and South-East Asia.
By : HT Auto Desk
| Updated on: 22 Mar 2022, 05:04 PM 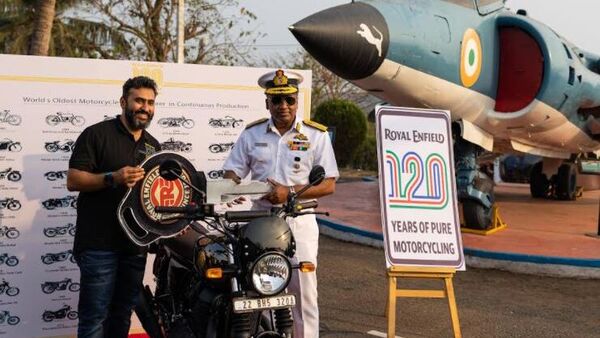 Royal Enfield on Tuesday informed that it has started deliveries of its 120th year Anniversary Limited Edition 650 Twin motorcycles - the specially designed Interceptor 650 and Continental GT 650 - to customers across India. First unveiled at EICMA last year, both Royal Enfield motorcycles are a celebration of the company's 120-year history and only 480 units have been manufactured for sales in India, Europe, Americas and South-East Asia with each getting 120 units.

Royal Enfield has earmarked 60 units of the limited edition Interceptor 650 and another 60 units of the Continental GT 650 for each of the regions mentioned above. Handcrafted by Royal Enfield teams in India and the UK, both motorcycles feature a unique black-chrome colour scheme, complemented by blacked-out components with the engine, silencer and other elements in an array of black colour schemes. The limited edition motorcycles also get a specially hand-crafted die-cast badge on the fuel tank and can be equipped with a range of accessories like flyscreens, engine guards, heel guards, touring and bar end mirrors, among others, in a black disguise to complement the overall design.

Royal Enfield claims that it received an overwhelming response for both motorcycles when an online flash sale was opened on December 6 of last year. As many as 17,000 registrations were received prior to the sale. Among some of the celebrated personalities who are bringing home one of these two limited edition motorcycles are Rear Admiral Philipose G Pynumootil of the Indian Navy, Olympic shooter Gagan Narang and Malayalam film actor Dhyan Sreenivasan.