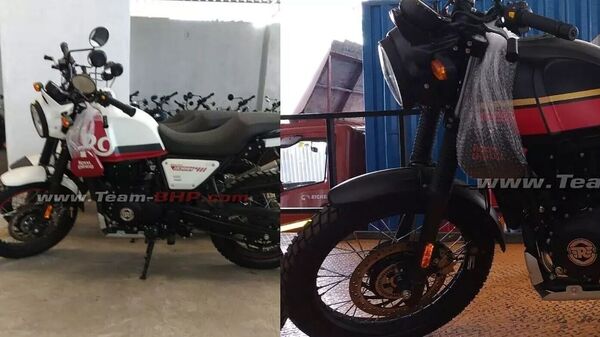 Royal Enfield Scram 411 is the next big launch from the Chennai-based retro motorcycle maker. While the motorcycle was previously said to be slated for February launch, the ongoing third wave has pushed the launch back by a few days. In the latest development, the bike has now arrived at a dealership backyard indicating that the launch is nearby.

The spotted motorcycle can be seen in two different paint schemes - Black with Maroon/Yellow highlights, and White with Red/Blue highlights. Needless to say, the bike will be made available in many more colour options, the details of which will be rolled out later in the days to come.

Also, very recently, the official brochure of the motorcycle was also leaked online throwing details on some of its new features. Meanwhile, at the heart of the upcoming Scram 411 will sit the familiar 411cc, single-cylinder unit that is known to churn out 24.3 bhp of maximum power. The transmission will remain the same as found on the Himalayan.

The Scram 411 will be a toned down version of the Himalayan and thus the company is thus likely to kit it with a different set of equipment to make it more cruising friendly. For starters, expect it to get a smaller 19-inch front wheel, as opposed to the Himalayan's 21-inch unit. The rear wheel, however, will remain the same 17-inch spoke wheel.

Also, as the new images hint that the bike will get a single seat on the Scram 411 instead of split seat option on the Himalayan. The handlebar will continue to be a flat and wide unit, but not quite as high raised as before. There will also be obvious modifications to the exterior look to make it distinctive in comparison to its hardcore ADV trim.