Meteor 350 comes out as a successor to the discontinued Thunderbird 350X.It is a new bike altogether, and not just a reworked version of some other Royal Enfield bike.
By : Prashant Singh
| Updated on: 06 Nov 2020, 16:53 PM

Royal Enfield Meteor 350 Supernova is the top-spec variant of the motorcycle and comes with a number of additional accessories. Image Courtesy: Sabyasachi Dasgupta

After disrupting the middle-weight segment with its Continental GT 650 and the Interceptor 650, Royal Enfield is back at it again, and this time the 350 cc segment in the focus. The Chennai based bike maker has introduced a completely new offering in the form of Meteor 350 which replaces the Thunderbird 350X. The company has also shared its development story with us to highlight how unique and freshly made product the Meteor is.

So is it really something different and worthy of spawning out future RE products? Or it's the same wine in a different bottle? Read below to find out.

Meteor 350 packs a very familiar, simple and traditional design lines. In fact it looks so close to its predecessor that it can be mistaken for a Thunderbird at times. It gets a very RE typical circular front headlamp with halogen lighting which is wrapped around an LED DRL. There is also a small RE logo that resides inside the lamp which adds to a premium touch on the bike. The tank has an eyedrop effect and gets a longitudinally set RE logo which is added to make the tank appear longer.

Come over to the rear-end and it gets a small circular tail lamp which protrudes out of the rear mudguard and is an all-LED unit. Overall, the fit and finish is impressive and everything is put together neatly, making the Meteor look quite premium.

Meteor is available in three versions – Fireball, Stellar and Supernova. The Superova version (test unit) comes with a slew of cosmetic upgrades here and there in comparison to the lower two models. Apart from the dual-tone paint, premium seats, machine-finished alloy , and chrome indicators, it also gets a front windscreen which is part of the standard kit on the Supernova. 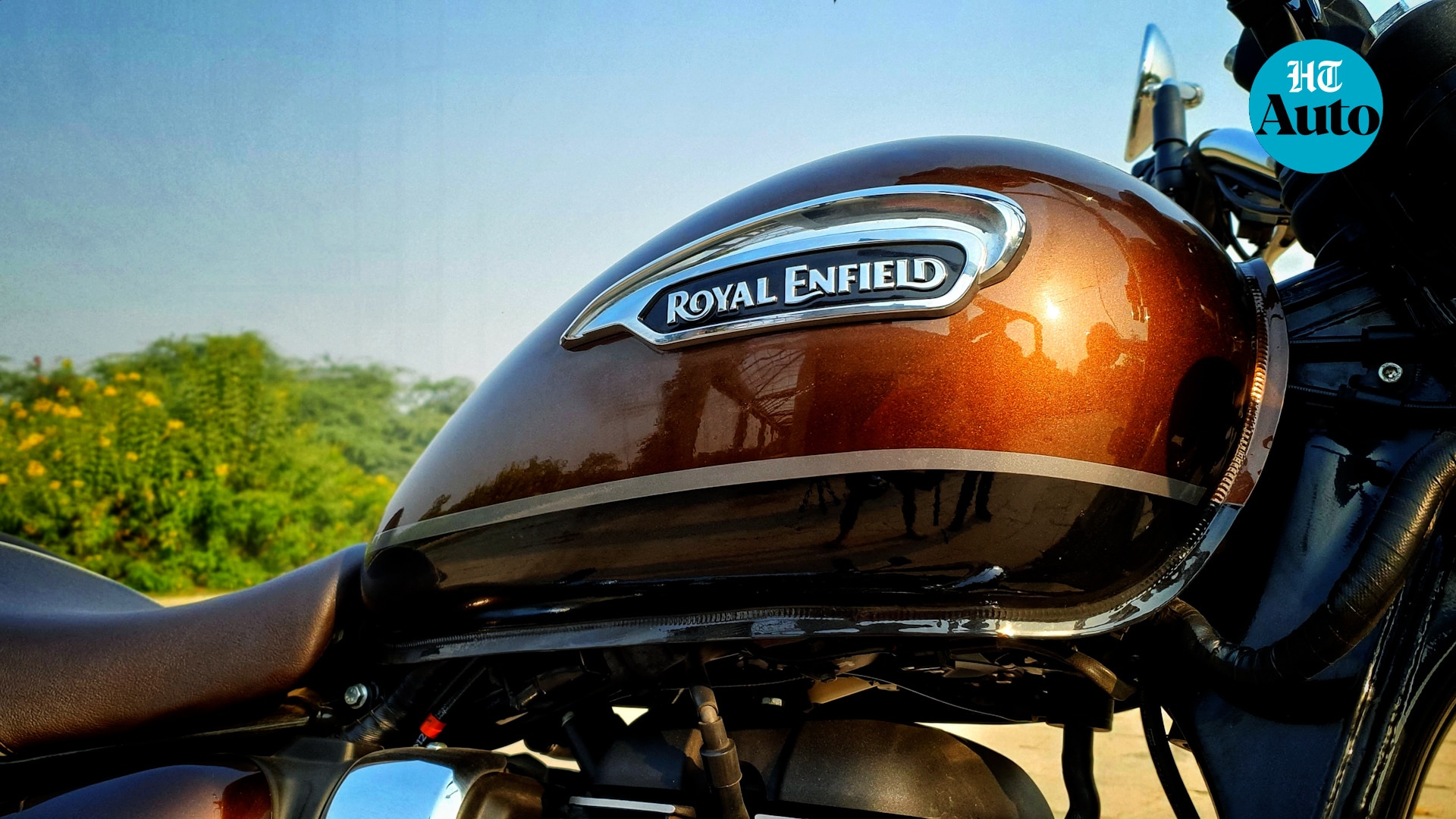 Royal Enfield has also developed a new instrument console for the Meteor. The main console is placed on the left which comprises an analogue speedometer and comes with a small inbuilt digital display for informatics like gear indicator, ODO, trip meter etc. And towards the right sits a small colour screen which is used to display turn by turn navigation and time. The key highlight is that it can also be pair with a dedicated smartphone application. The bike is easy to connect with a smartphone device using Bluetooth. 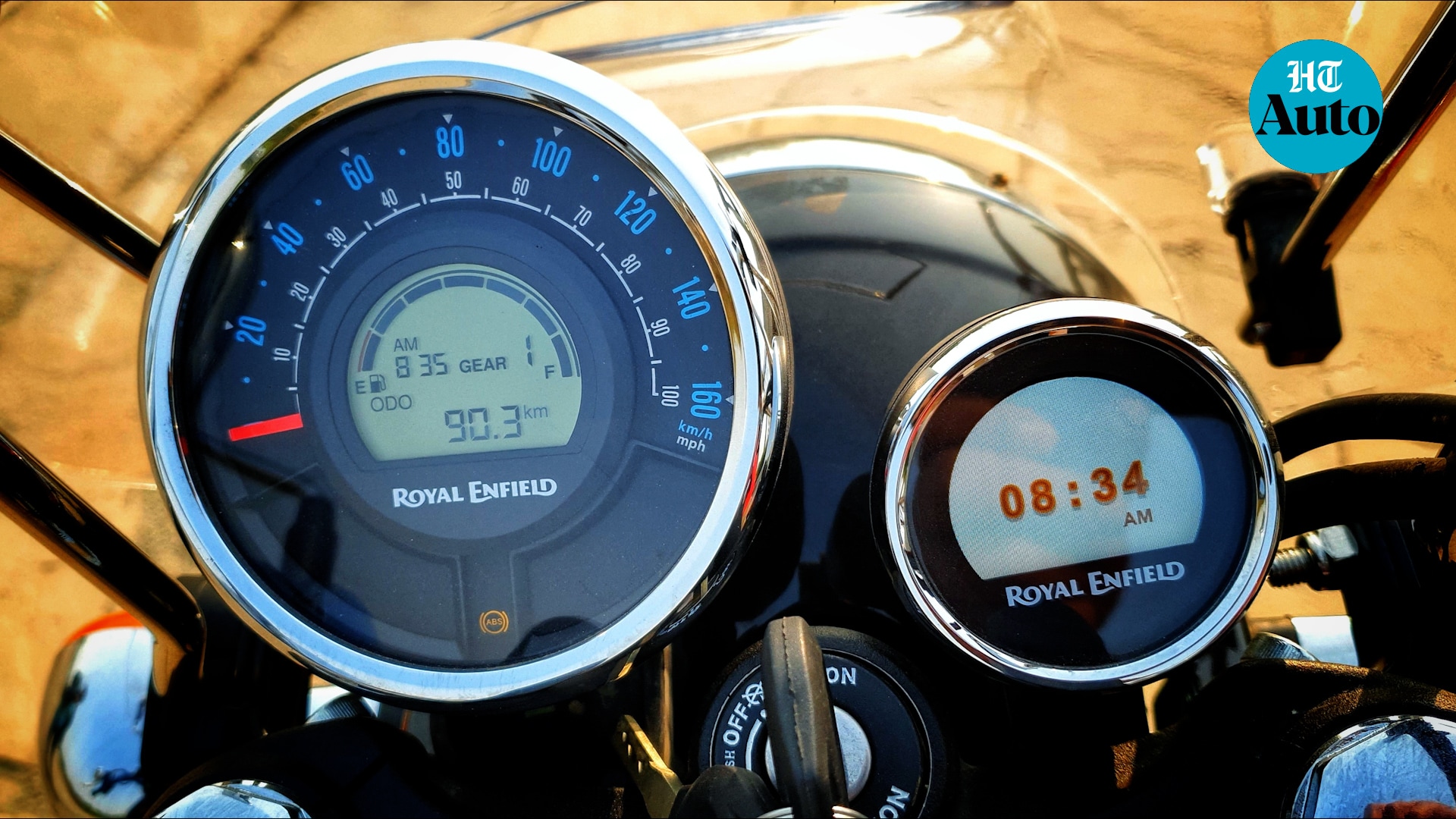 Heart of the Meteor:

At the core of the Meteor sits a 349 cc single-cylinder engine which delivers around 20.2 bhp of power and 27 Nm of peak torque. The transmission option includes a 5-speed unit. While the company already had an existing 350 cc engine which could have been used but it decided to develop a new unit boasting a SOHC two-valve head replacing the older pushrod-valve system. Also, what's to be noted is that while the engine remains air-cooled, there is an additional internal oil circuit within the cylinder head for cooling.

In terms of delivery, the power is almost linearly spread across the range, and there is a wave of torque experienced around the middle band which makes it delight to ride in everyday conditions. While the traditional 350 cc range from RE feels raw, the new unit is completely in a league of its own with its buttery smooth power delivery and refinement levels which set a new benchmark. The NVH levels have been controlled very impressively and at the same time, everything is put together well, as a result, there are no vibration on the handlebar or the footpegs. A sweet surprise isn't it? The company says that it has the same built standards as the bigger 650 Twins, and that is not a false claim. 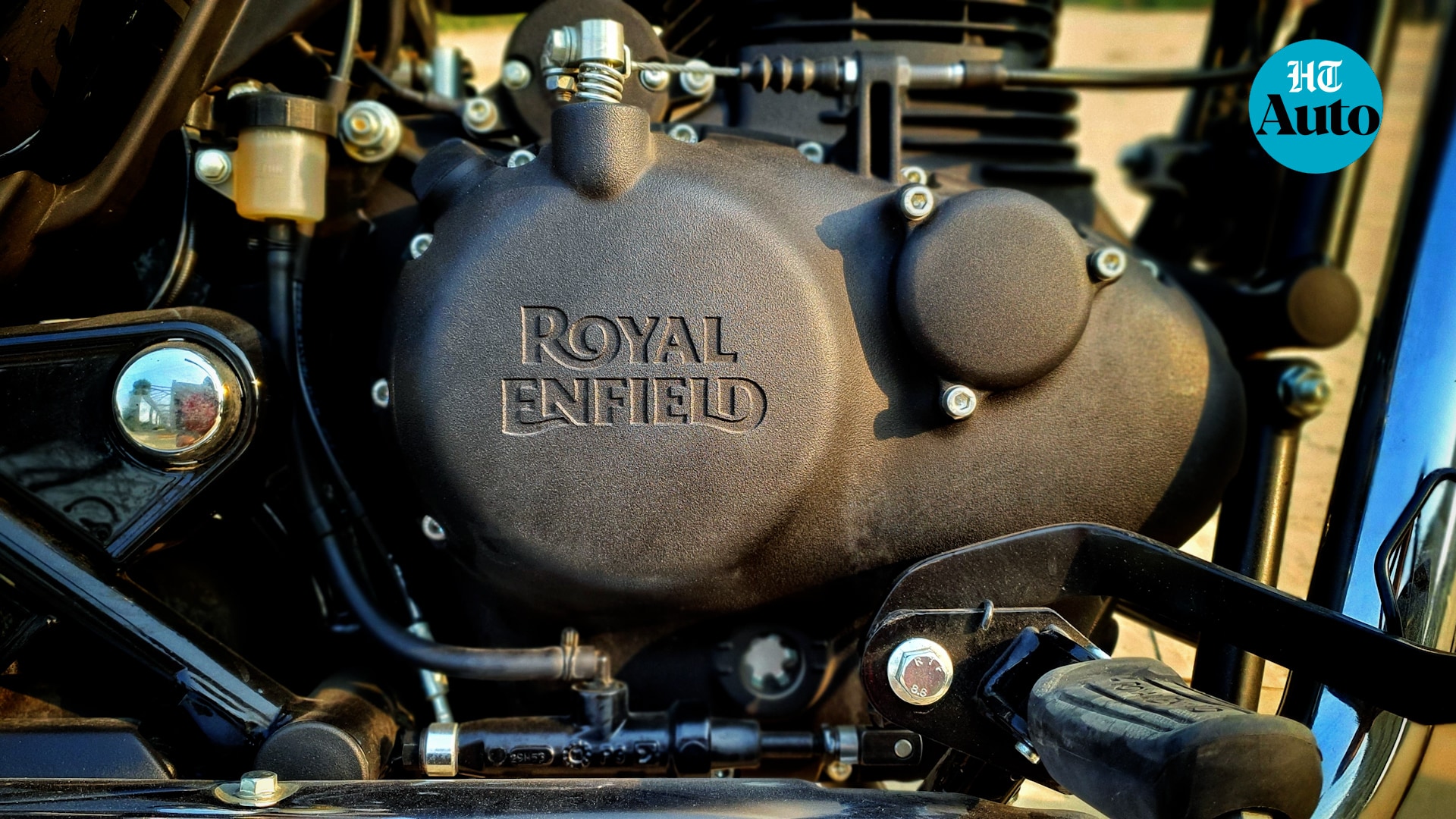 The new 349 cc engine is completely in a league of its own with its buttery smooth power delivery and refinement levels which set a new benchmark. Image Courtesy: Sabyasachi Dasgupta

How are the riding ergos?

The Meteor 350 sports a mix of the riding styles of Classic and Thunderbird bikes which lend it a neutral and comfortable riding position. The rider sits fairly upright and the foot pegs positioning is not exactly mid-set. And it definitely works! 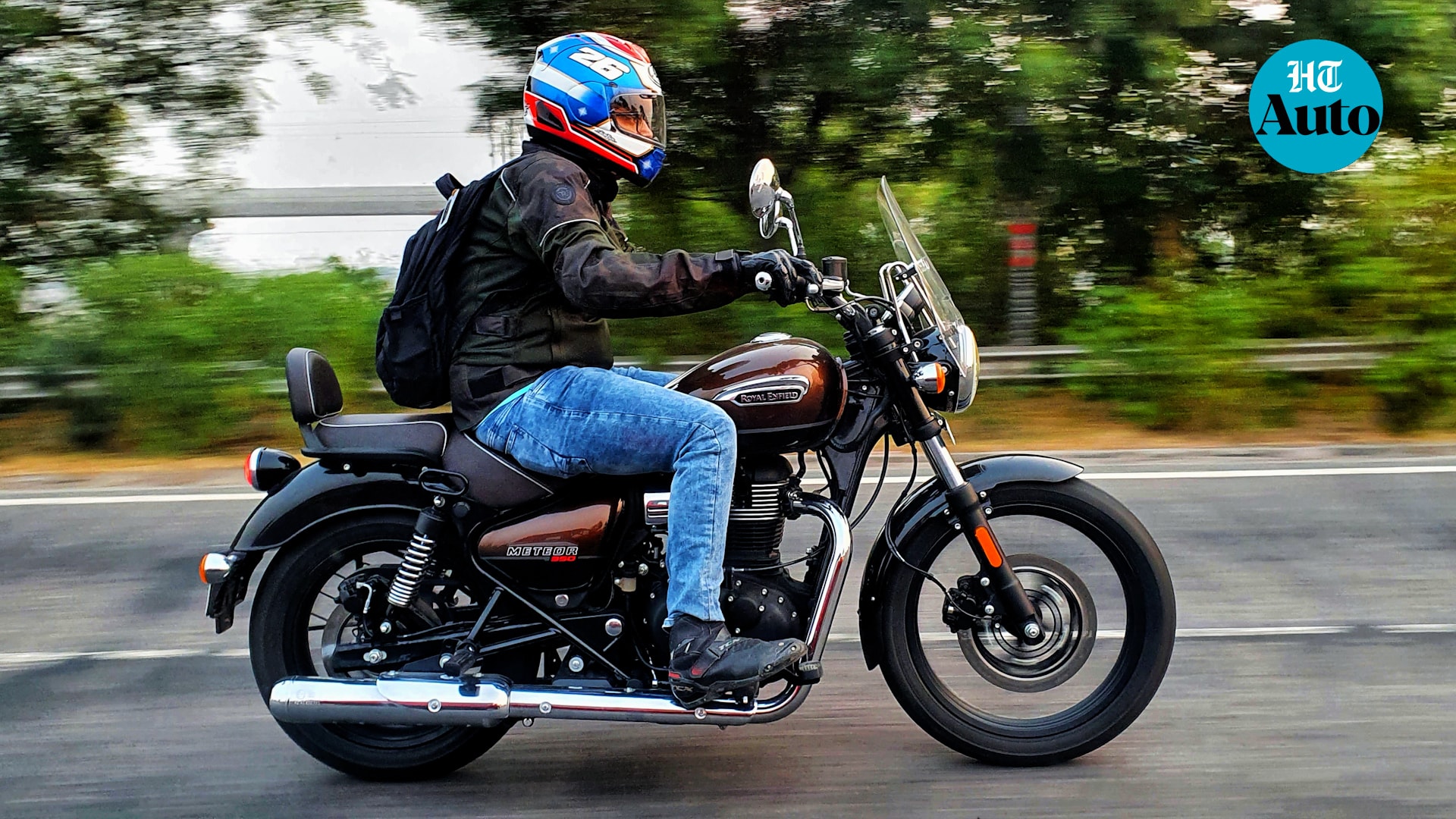 Being based on a completely new setup and platform, Meteor is leaps ahead in terms of ride and handling. It feels surprisingly light and nimble for a 191 kg bike, especially on the roll. Also, its heavy duty telescopic, 41 mm forks at the front have been tuned to keep the bike feel planted irrespective of the riding conditions. The suspension feels solidly built and complements its 170 mm ground clearance, which makes its ready for all your adventures.

In terms of equipment and cycleparts, the company has decided to use a combination of 19-inch front wheel and 17-inch rear wheel which come shod on to Ceat tyres. While the front one come kitted with a 300 mm disc and the rear gets 270 mm disc. And of course not to forget that it is offered with dual-channel ABS as standard. That said, while the braking power is adequate at the front, the rear feels lacking the bite. Also, the squishy feeling from the front lever isn’t very helpful at times. While this isn't new for Royal Enfields, bringing the Meteor to instant halt requires quite an effort on the brake lever. 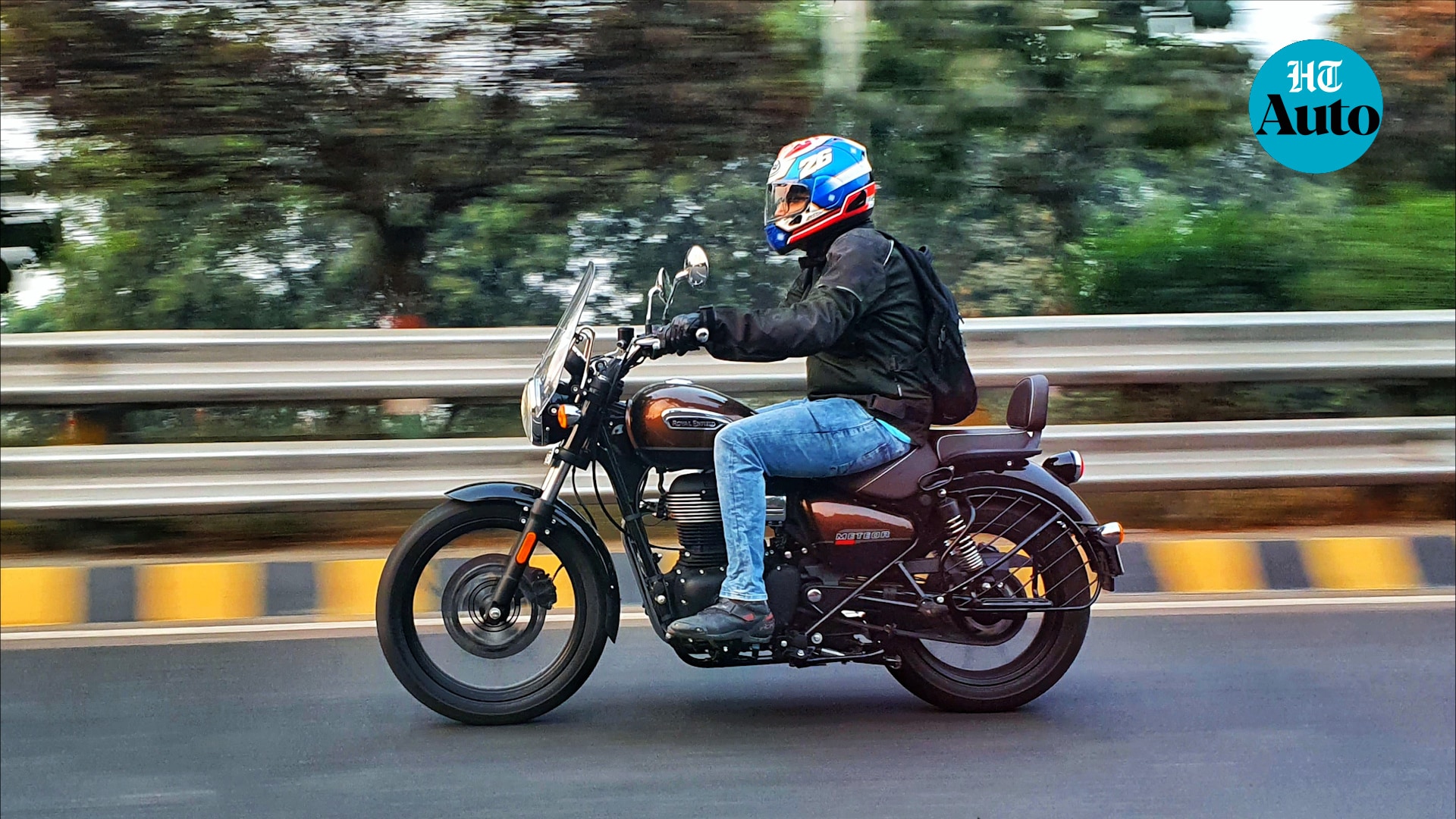 Bringing the Meteor 350 to an instant halt requires quite an effort on the brake lever. Image Courtesy: Sabyasachi Dasgupta

The Meteor 350 is a sweet surprise and unlike anything out from Royal Enfield in the 350 cc segment. It is not only a new product, but a quantum leap in terms of retro cruising. With the Meteor 350, Royal Enfield has blurred the line between its premium 650 Twins and the 350 cc lineup and has proved that it is capable of delivering a similar quality in its more affordable, lowered positioned products as well.

Meteor is a very significant product for the company as its engine, and frame will spawn out a new era of modern Royal Enfields. The company has also announced the pricing of the bike which starts at ₹1.75 lakh (ex-showroom). It is indeed impressive considering that it undercuts the main rival (Honda H'ness CB 350) by quite a margin.