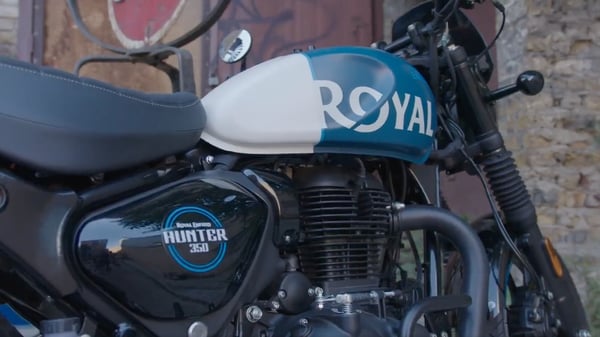 Royal Enfield will announce the price of the Hunter 350 motorcycle, which will be launched in India on August 7.

According to the specifications, the Royal Enfield Hunter 350 will be offered in two variants called the Metro and the Retro. The bike weighs 181 kgs and comes with a top speed of 114 kmph. The motorcycle uses a fairly common engine with other Royal Enfield 350cc motorcycles, but there is a slight difference in the gearbox ratio which is longer than the Classic and Meteor. The two-wheeler maker has tweaked it in order to reduce top speed and improve the overall torque-grabbing feel of this Scrambler.

The suspension setup on the Hunter 350 will be similar to that used in the Meteor 350. It will have a seat height of 800 mm, ground clearance of 150 mm, and the fuel tank capacity is 13 litres. The Metro version of the motorcycle stands on a pair of 17-inch alloy wheels with front and rear disc brakes. It also gets dual-channel ABS, LED taillight, dual-tone paint theme among other features. The Retro variant of the Hunter 350 will get rear drum brake, single-channel ABS, wire-spoke wheels and single-tone colour scheme.

Both variants of the Royal Enfield Hunter 350 motorcycle will be powered by a 349cc single-cylinder, SOHC air/oil-cooled engine which will be offered with a five-speed gearbox. The engine is capable of churning out maximum power of 20.2 bhp at 6,100rpm and 27 Nm of peak torque at 4,000rpm. Royal Enfield claims that the 350cc motorcycle will return a mileage of 36.2 kmpl.

The Hunter 350 will rival the likes of Honda CB350RS, Jawa 42 or the recently launched TVS Ronin, when launched. The price of the motorcycle is likely to start from around ₹1.30 lakh (ex-showroom) and may go up to ₹1.45 lakh (ex-showroom).