The One Electric Kridn is basically a retro-looking all-electric motorcycle which has been claimed to be under development for past two years now.
By : Prashant Singh
| Updated on: 28 Feb 2020, 02:06 PM 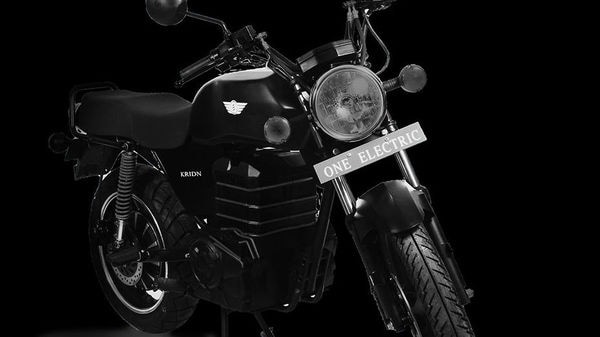 One Electric Kridn electric bike has a maximum (full-charge) range of 120 kms.

One Electric, a Noida based electric two-wheeler start-up has officially confirmed the launch of its Kridn electric bike for March 2020.

For the people unaware of the past developments, the Kridn is basically a retro-looking all-electric bike which has been claimed to be under development for past two years now.

The motorcycle gets its name 'Kridn' from the Sanskrit language and is pronounced as 'Kree-done', which means 'to play'. The company says that the motorcycle has been built keeping the Indian road conditions in mind, but only a thorough road test review will prove if the claims hold any ground.

Its flat and raised handle bar, long-stretched single seat, and mid-placed foot-pegs suggest that the rider-triangular will be natural and seating may also be comfortable.

Earlier it was reported that the motorcycle design patent was amidst approval stage, but since the company has made the launch timeline official, all approvals seem to be settled now.

It has also been claimed that the Kridn's performance will be comparable to a 125 cc ICE powered motorcycle. This may not attract hardcore two-wheeler enthusiasts but Kridn will be targeted as a mass market product and will perhaps be seen as an alternative solution for future urban mobility, like most of the electric scooters. The chassis development for the Kridn electric bike has been carried on locally and manufactured in order to meet the brand's electric drive requirements.

While the company is yet to disclose its specification figures, what has been confirmed for now is that the Kridn's range would fall in between 80 to 120 kms on a full charge, depending up on the normal or Eco mode. The bike will be good enough to accelerate from 0-60 km/hr in just 8.0 seconds.

The company's official website states that Kridn's initial launch will take place in Delhi-NCR and Pune, only. But, several internet reports say that cities like Jaipur, Hyderabad, Bengaluru and Chennai, will also join the list in the next phase.

Stay tuned to HT Auto for more such updates.