Ola S1 or Honda Activa? The apple vs orange debate you need to read

The sales gap Honda Activa manages to maintain with its rivals is huge.Some of the trims of the Honda Activa and the Ola S1 electric scooter are priced very closely. Ola Electric has witnessed huge demand from about 1,000 Indian cities.
By : HT Auto Desk
| Written By : Prashant Singh
| Updated on: 24 Aug 2021, 03:42 PM 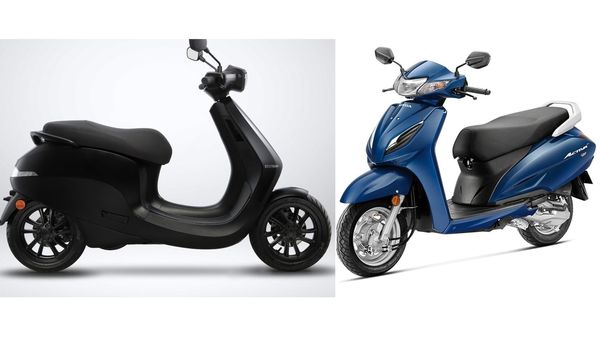 Some of the trims of the Honda Activa (R) and the Ola S1 (L) electric scooter are priced very closely.

Scooters are one of the most preferred modes of transport in India. They are affordable to buy and maintain, and generally have a greater fuel efficiency when compared to motorbikes. While there is a slew of promising options available in the market, but it's the Honda Activa that rules the roost in the traditional ICE scooter segment, so much so that it has also dethroned the Hero Splendor on several occasions to come out as the best-selling two-wheeler in India. As such, it may seem like a far-fetched thought that an electric scooter may at some point possibly mount a serious challenge. But can the Ola S1 electric scooter indeed come close in the future?

Only last month, Honda Motorcycle and Scooter India managed to sell 1,62,956 units of Activa in the country. This is significantly greater than the second most selling scooter in India (July'21) Suzuki Access that found 46,985 buyers. So the sales gap Activa manages to maintain with its rivals is undoubtedly huge.

But with the rise of the battery-powered two-wheelers, the Activa has a new kind of competition that is likely to pose a threat to its throne in the times to come.

Ola Electric rolled out the new S1 electric scooter in India earlier this month. The company announced that it managed to receive over 1 lakh bookings in just 24 hours of commencement of pre-bookings. Ola received bookings from 1,000 Indian cities for its electric scooter.

While the S1 comes with a host of features to attract buyers, its high demand can also be attributed to the near-perfect pricing placement that brings it in the vicinity of the Activa's range. Ola S1 costs from ₹85,099 (ex-showroom) in Delhi, which is close to the Honda Activa 125's top variant that has been priced at ₹79,760 (ex-showroom) in Delhi.

Needless to say, both the scooters are based on completely different technologies and appeal to a different set of buyers, but the fact remains that e-scooters are garnering increased interest thanks to government subsidies on EVs and also the rising fuel costs that are indirectly affecting buying preference of two-wheeler customers in India.