Ola Electric launched its first e-scooter in India at a starting price of ₹1 lakh. Packed with features and promise of unparalleled range on an electric two-wheeler, Ola aims to take on key rivals in the segment.
By : HT Auto Desk
| Updated on: 19 Aug 2021, 13:56 PM 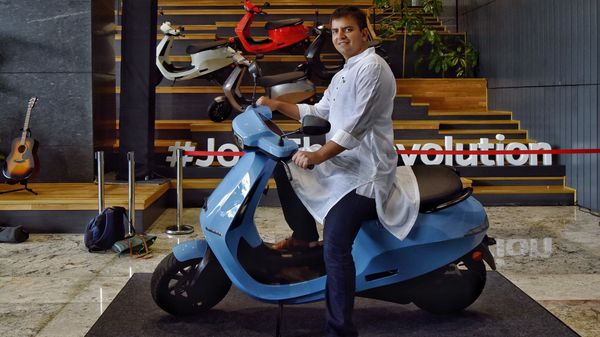 The Ola Electric S1 scooter is offered at a price of ₹99,999 (ex-showroom) and the S1 Pro will cost ₹1,29,999 (ex-showroom). The price, however, varies from state to state. The most affordable Ola Electric scooter can be bought for just ₹79,999 in Gujarat. Pre-launch bookings for Ola S1 had already been opened earlier this month and had received more than 100,000 pre-bookings within the first 24 hours.

Ola electric scooters can be booked through the electric two-wheeler manufacturer’s official website at a nominal amount of ₹499. While Ola Electric has launched the e-scooters and is already in process of manufacturing them from its newly-built Futurefactory situated in Tamil Nadu, the sale of these electric vehicles will only begin from next month.

According to Ola, the electric scooter sales will officially begin from 8 September. The electric scooter will be delivered straight to home by Ola, minus dealer set up. Ola has also said that the deliveries of these e-scooters will begin later in October. It aims to deliver its e-scooters to as many as 1,000 cities and towns across the country.

Ola Electric has said that EMI for its e-scooters will be less than ₹3,000 per month. The company has tied up with several banks and financial institutions to offer affordable EMI plans to buy its electric scooters.

The Ola Electric scooter will be offered with a 3.9 kWh battery pack that supplies power to an electric motor delivering 8.5 kW peak power. The scooter can be recharged fully in just 6 hours with a 750W portable charger. If plugged on to an Ola Supercharger, it will take just 18 minutes to recharge up to 50 per cent. The Ola S1 electric scooter offers a claimed range of 181 km, much higher than the range of electric two-wheelers currently on offer in the Indian market.