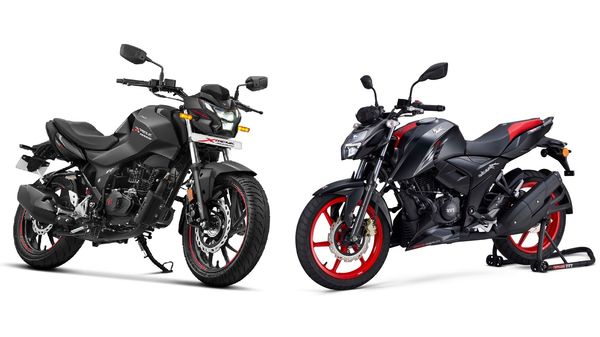 Festive season 2021 is on and two-wheeler makers are showering new special edition vehicles to make the best of this high sales season. Recently, TVS Motor Company announced the pricing of its updated Apache RTR 160 4V and at the same time, Hero MotoCorp also announced the launch of the new Xtreme 160R Stealth Edition motorcycle which is basically a fully black-dipped iteration of the popular Xtreme 160 bike. Here's how both the bikes compare against each other on paper.

TVS Motor Company has announced the launch of the new Apache RTR 160 4V Special Edition with some first-in-segment features including adjustable clutch and brake levers, an exclusive Matte Black colour with red alloy wheels, and a new seat pattern besides the new headlamp. Others key features of the bike include gear shift indicator, SmartXonnect and radial rear tyre.

On the other hand, the new Xtreme 160R Stealth Edition comes with a new Matte Black exterior paint scheme. The new Stealth Edition of the popular naked street bike brings several additional first-in-segment features such as an integrated USB charger and LCD brightness adjustment. In addition to that, it also gets a new gear indicator feature on the speedometer.

At the heart of the updated Apache RTR 160 4V sits a 159.7 cc SI, 4 stroke, Oil cooled which remains unchanged. This engine is responsible for delivering 17.63 PS of power at 9,250 rpm and 14.73 Nm of torque at 7,250 rpm. The engine comes mated to a 5-speed transmission. The Xtreme 160R gets a 160cc air-cooled engine that is powered by the XSens technology and advanced Programmed-Fuel-Injection. This has been rated to deliver a power output of 15.2 PS at 8,500 RPM. It also gets a 5-speed transmission.