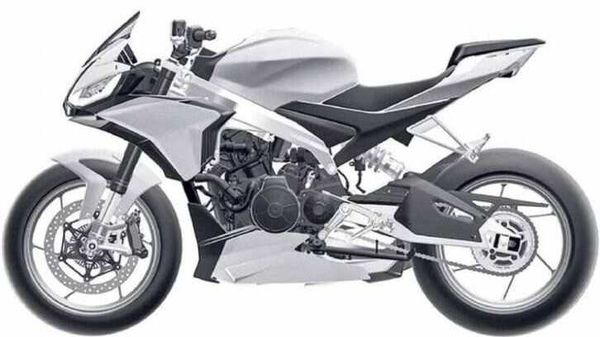 A patent image of Aprilia Tuono 660.

Along with the new RS660, another bike which is set to be introduced by Aprilia in a not so distant future is the semi-faired Tuono 660 sport touring motorcycle. Latest patent image reveals what the upcoming middleweight tourer might look like.

The bike was revealed as a concept at the EICMA 2019 and is finally inching closer to the production. The bike is expected to make its official debut towards the end-2020.

As known previously, the Aprilia Tuono 660 shares its engine, frame and other mechanical bits with its fully-faired counterpart. It will serve the same purpose as the bigger Tuono RSV4. It will feature an upright riding stance, a wide single-piece tube-type handlebar, mid-set foot pegs and more, that will make it a comfortable long distance touring machine.

If details from the latest patent image are anything to go by, the Tuono 660 will have its signature triple-headlight setup similar to that of the RS660. Other design elements such as sculpted beefy fuel tank, exposed engine, and high-rise sleek tail section, will make it a legitimate 'RS' series bike.

Under the fairing will sit the familiar 660 cc parallel-twin engine that's also shared with the RS660. However, the company may tune it specifically for different bikes as per the need. In Tuono 660, expect it to deliver around 96 to 98 PS. This engine will be mated to a 6-speed gearbox and will comply with the newest Euro 5 emission standards.

As far as the bike's availability in India is concerned, nothing is confirmed yet.