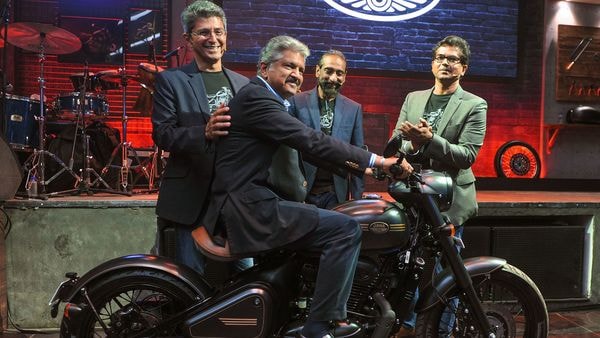 Mahindra group subsidiary Classic Legends has launched the production version of 334-cc Jawa Perak, the third model since the reentry of the Czech motorcycle brand in the country last year, priced at ₹1.94 lakh (ex-showroom).

In 2016, Mahindra & Mahindra had struck a deal with the bike maker which allowed Classic Legends to launch and market bikes under the Jawa brand name in the country and East Asian markets.

"Last year we had the rare opportunity to resurrect an iconic brand. Its been a deeply fulfilling year," said Mahindra group chairman Anand Mahindra at the launch on Friday.

The company will open bookings for its new bikes from January 1 and the deliveries will start from April 2, Classic Legends co-founder and director Anupam Thareja said.

The bookings for Perak will, however, be open only for a period of 3 months and the company will focus on those deliveries before accepting new orders.

Thareja, who is also the founder of Phi Capital Management along with the director of Rustomjee group, Boman Rustom Irani are the other two stakeholders in Classic Legends besides Mahindra group, which owns 60 per cent stake in the company.

The bikes are being produced at Mahindra's manufacturing facility in Pithampur near Indore in Madhya Pradesh, which has a capacity to churn out 0.5 million vehicles per annum.

Despite the company commencing bookings of Jawa and Jawa Forty Two about nine months ago, it has not shared any sales numbers so far and have sought the refuge in the customer "experience" and higher than expected "response".

"First two years are more important to set up the brand (than focusing on volume). We had our internal business plans, but we had to recast them purely because of the number of bookings we got was much higher than we expected," said Ashish Joshi, chief executive officer, Classic Legends.

"We had to recast those business plans. We have revamped the production to meet that demand," he said.

According to the company, an overwhelming response to bookings for Jawa bikes ensured the brand was sold out for nine months, within a few days from the announcement and had to close online bookings within 40 days of launch.

Joshi claimed that all those customers who had booked online by December 25 last year have been delivered the bike by September.

He said that having ramped up suppliers and the factory system and building up the eco system, now it is time for consolidation.

"This year (the end year of operations) will be a year of consolidation in terms of dealerships and also new products as well as the realignment of the customer experience," Joshi added.

The company currently has 100-odd dealerships across 85 cities.