The new spy image suggests that the next-gen KTM 390 Adventure will come out to be a more dedicated off-road machine than the existing model.
By : HT Auto Desk
| Updated on: 19 Feb 2022, 09:53 AM 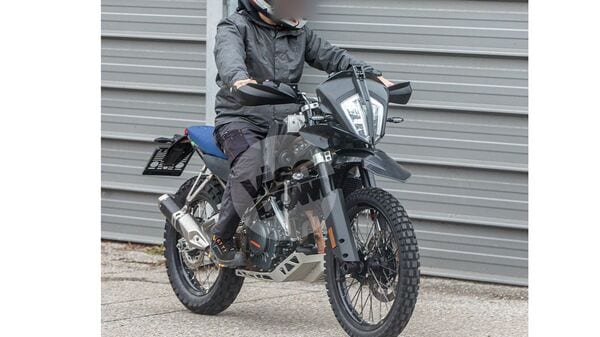 One of the biggest updates on the new 390 ADV is going to be its spoke wheels along with a bigger 21-inch unit at the front.

After recently updating its popular RC range globally, KTM is now developing an update to the 390 Adventure which has been spotted getting tested overseas. From the details emerging out of the latest spy shots, the new 390 Adventure will come out to be a more dedicated off-road machine than the existing model.

The newly spotted motorcycle could be the next-generation update of the current model, or it could also be a more dirt-friendly avatar with ‘Enduro’ tag on it. However, since KTM usually introduces generation updates in a gap of 5-7 years, this seems to be the correct time for the next-gen 390 Adventure.

The spy images also suggest that one of the biggest updates on the model is going to be its spoke wheels along with a bigger 21-inch unit at the front. That said, other key changes could include a new frame, features, and updates to the styling. One completely new item on the motorcycle visible in the picture is the use of a totally revised swingarm.

The company may also introduce changes to the bike's powertrain but that's not confirmed as of yet. As far as its public debut goes, it is still in the middle of the development stages so expect it to be ready only by the end of 2023 or early 2024.

Meanwhile, KTM is gearing up for the launch of its latest-gen RC390 in the Indian market. The motorcycle will go on sale in the country in the next few weeks. It has already made its global debut as a replacement for the last-gen model.