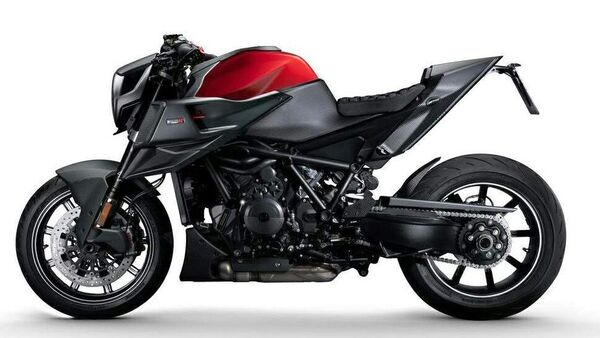 The Brabus 1300 R will be limitedly produced and only 154 units of the bike will be manufactured.

KTM and the German tuning company Brabus have together introduced the new 2022 Brabus 1300 R hyper-naked motorcycle. This bike comes based on the much popular KTM’s flagship bike the 1290 Super Duke EVO.

While the Brabus 1300 R is basically the KTM 1290 Super Duke on the inside, externally there are some major-specific changes that give it a completely distinctive appeal.

Aesthetically, the Brabus stands apart with its unique design which is nothing like its donor model. At the front, it gets a round headlamp which is flanked by angular nacelle, while the Super Duke gets a much sharper and pointy front end design, like the rest of its body panels. The tank on the Brabus gets large air intakes with winglets, and the tank design reminds of the Diavel muscle cruiser from Ducati.

Unsurprisingly, the majority of the body panels on the motorcycle come made up of carbon fibre. Also, components like the footpegs, CNC brake and clutch levers, and nine-spoke alloy wheels are fairly unique to the bike. However, Super Duke's five-inch full-colour TFT instrument cluster has been carried on exactly as it is. This unit also gets smartphone connectivity feature.

The engine remains the same 1,301cc, twin-cylinder, liquid-cooled unit that is known to push out massive 180bhp of maximum power, backed up with 140Nm of peak torque. The engine comes mated to a six-speed gearbox and is accompanied by a bi-directional quick shifter as standard.

Moreover, other key rider aids and safety features on the motorcycle include traction control, engine brake control, cruise control, multiple riding modes, and more. Apart from the engine and features, the suspension kit on the bike also remains the same. It uses a WP Apex suspension setup and for braking, there are Brembo Stylema brake calipers.

The Brabus 1300 R will be limitedly produced and only 154 units of the bike will be manufactured. As far as the pricing goes, it retails at 34,549 GBP (approximately ₹35 lakh) which is even higher than the donor model.