Honda CB1000R gets an updated bodywork which makes it look slightly fresher against its predecessor. It has received a reprogrammed fuel-injection system. It will be announced for India in 2021.
By : HT Auto Desk
| Updated on: 14 Nov 2020, 08:36 AM 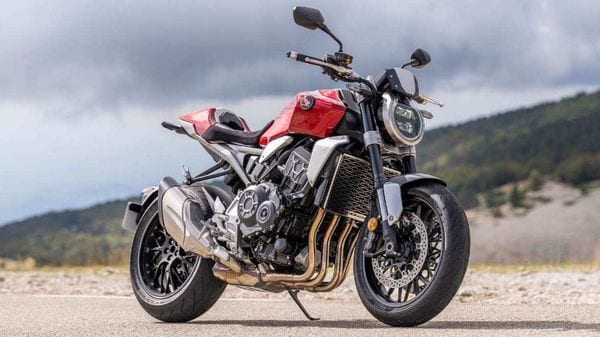 Honda has revealed the new 2021 CB1000R neo-retro supernaked motorcycle. The bike has received a few minor updates including a Euro 5/BS 6-compliant powertrain which makes it eligible to be sold in the Indian market.

The new 999 cc, inline-four engine makes slightly higher power in comparison to the previous model. It delivers 141 PS and 104 Nm of peak torque. The engine redlines at 12,000. The company claims that it has reprogrammed the fuel-injection system of the motorcycle and that's why despite the new emission compliance the updated engine hasn't sacrificed its performance output.

In terms of exteriors, the motorcycle features an updated bodywork which makes it look slightly fresher in comparison to the outgoing model. Over the front, the motorcycle now boasts a new angular headlight bezel which is capped with a short screen that guards the TFT display. Honda has also tweaked the radiator frame and side plates shape and the motorcycle now comes fitted with a pair of w-spoke aluminium wheels.

It terms of electronic features and rider aids, it gets three power maps, three engine brake maps, and three levels of switchable traction control. It also gets a conventional ABS unit without any inertial measurement unit (IMU), or cornering function. The suspension duties on the bike are handled by Showa Separate Function Fork Big Piston (SFF-BP) for the front and matching Showa monoshock at the rear. It has a kerb weight of 212 kg.

Part of the yearly update, the bike has been given a USB charging port as well as Honda Smartphone Voice Control system. The latter will be similar to the one that was introduced in the H'Ness CB 350 recently.

There is also a CB1000R Black Edition available which gets blacked-out paint scheme along with a standard quickshifter feature.