Home Auto Two Wheelers Honda Unveils Rebel 1100 Bike, Its Most Powerful In The Rebel Line Up

Honda unveils Rebel 1100 bike, its most powerful in the Rebel line-up 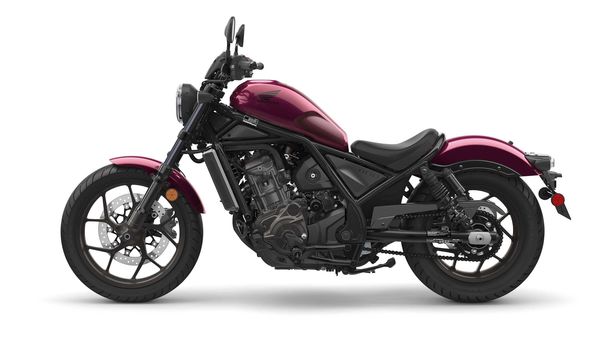 Honda Rebel 1100 bike was unveiled, to be launched soon in India.

Honda is all set to launch its new bike Rebel 1100 in India soon. The Japanese two-wheeler manufacturer unveiled the bike on Thursday.

According to reports, the design of the Honda Rebel 1100 will be inspired by the Rebel 500. The new bike will come in a retro design, with round headlamps, round mirrors, tier-drop shape fuel tank and black alloy wheels. The powerful cruiser bike will get a full-digital instrument console and it will also have full LED lighting.

The Honda Rebel 1100 Cruiser Bike will get a 1,100cc engine, just like the company's flagship bike CRF1100L Africa Twin. This engine generates power of 102hp at 7,500rpm and 105Nm peak torque at 6,250rpm. The engine will be mated to a six-speed transmission or a DCT automatic transmission. The bike will come with 18-inch wheels at the front and a 16-inch wheel at the rear.

The Honda Rebel 1100 bike will get disc brakes on both sides. It will also have features such as ABS, traction control, cruise control and riding mode for better handling. This new cruiser bike will get telescopic forks in the front and twin shock unit suspension in the rear.

Honda has unveiled the Rebel 1100 bike in two colours- Metallic Black and Bordeaux Red. The bike will also come with a host of accessories, including saddlebags.

Honda has not yet made an official announcement regarding its launch. When launched, the Rebel 1100 will be placed above other Honda Rebel offerings like the Rebel 500 and Rebel 300 bikes.