Honda's upcoming flex fuel-based models are still a few quarters away from being launched in India.
By : Prashant Singh
| Updated on: 22 Apr 2022, 10:40 AM 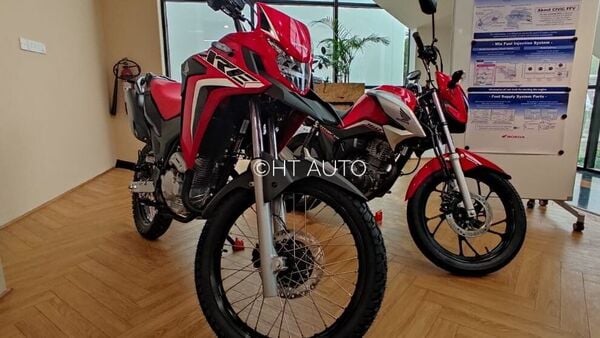 Honda Motorcycles and Scooter India (HMSI) recently shared its intent to launch flex-fuel based motorcycles in the country. And the company has now also displayed two popular flex fuel bikes in India - XRE300 Rally, and Titan CG. Both of these bikes are already sold in the Brazilian market. HMSI has also informed that the first flex-fuel model headed towards the Indian market will be commuter motorcycle so this only indicates that the bigger displacement XRE300 Rally in unlikely to be launched in the Indian market anytime soon. However, the chances of Titan CG to be introduced in India are somewhat bright.

The Titan CG is an equivalent model to the Honda XBlade in the Indian market. It gets a 162.7 cc, single cylinder engine which delivers 14.9 hp of power at 8,000 rpm (Gasoline) and 15.1 hp at 8,000 rpm (Ethanol). It comes equipped with a PGM FI Electronic Injection and comes with a 5-speed transmission.

The company also informed that it is yet a ‘few quarters away’ from launching the first flex-fuel bike in India as it is working with the government to sort out the necessary requirements from both the ends.

Speaking about the two-wheeler giant's product strategy Atsushi Ogata, MD, President and CEO, HMSI, said that a staggered implementation of flex-fuel technology and the introduction of multiple electric vehicles in future will lead to an exciting journey ahead. “Bringing the synergies of Honda's global expertise with strong indigenous support HMSI will further expand its horizons in India," Ogata further added.