By size and engine capacity, the Honda CRF190L can be considered a rival to the likes of the Hero Xpulse 200.At 240 mm of ground clearance, the baby CRF promises to tackle the off-road trails with dominance.
By : HT Auto Desk
| Updated on: 16 Sep 2021, 09:58 AM 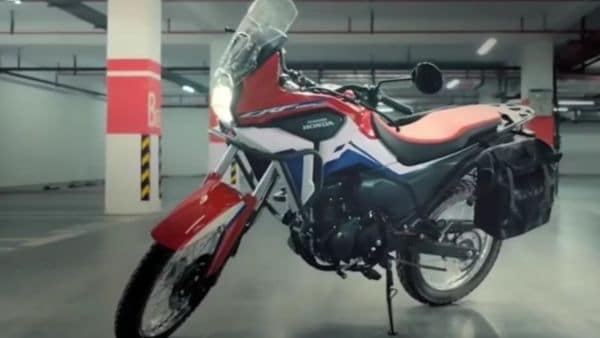 At 240 mm of ground clearance, the baby CRF promises to tackle the off-road trails with dominance.

Honda has introduced a small size adventure motorcycle in the market of China. The new adventure offering from Honda is called the 2021 CRF190L. By size and engine capacity, it can be considered a rival to the likes of the Hero Xpulse 200 that is sold in the Indian market.

The new Honda CRF190L sources power from a 184cc engine single-cylinder engine that is known to deliver a maximum power output of 15.5 bhp and 15.7 Nm. The engine comes with a 6-speed gearbox. The CRF190L is a lightweight motorcycle that tips the scales at just 145 kg.

At 240 mm of ground clearance, the baby CRF promises to tackle the off-road trails with dominance. It has a seat height of 830 mm which is even higher than the Hero XPulse 200. Adding to its adventure credentials is a long-travel suspension setup, and a wheel combination of 19-17-inch spoke wheels that are shod with dual-purpose tyres.

On the outside, the motorcycle comes with Honda's iconic Red/Blue livery that's found on the bigger CRFs. It features a tall and dominating stance with a long windscreen, single-seat, long and wide handlebar, spoke wheels, and also crash guards which are likely to be part of the optional kit on the bike. In addition, there is also a luggage rack and other touring accessories that are also likely to be optional.

There is no confirmation if the bike will arrive on the Indian shores anytime soon, but chances are less likely. For Indian customers, the company has recently introduced the CB200X which uses the Hornet 2.0's platform.