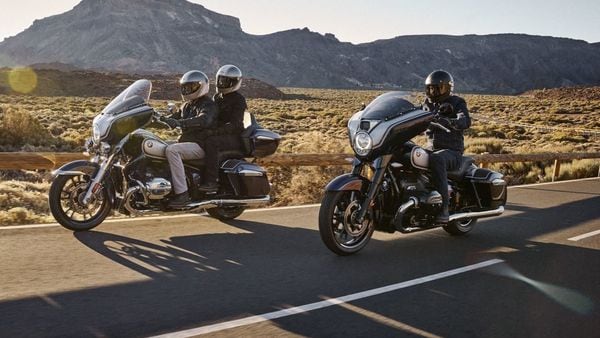 Both the new BMW cruisers differ from one another in terms of different luggage and front fairing.

BMW Motorrad has announced two new models in its R 18 cruise line. The new motorcycles introduced by the company include BMW R 18 B "Bagger" and the BMW R 18 Transcontinental. Originally, the BMW's R 18 cruiser was launched back in 2020.

The R 18 cruiser line comprises heavy touring-oriented models that rival the likes of offerings from brands such as Harley-Davidson and Indian Motorcycle. These bikes have been designed solely for mile-munching purposes.

Both the new R 18 models continue with the company's "Big Boxer" engine which is a 1,802 cc, two-cylinder, horizontally-opposed twin. This unit is capable of churning out 91 bhp of maximum power at 4,750 rpm and 150 Nm of peak torque that's available in the range of 2,000-4,000 rpm. For the record, this is the most powerful engine to be ever built by the company.

Both the motorcycles differ from one another in terms of different luggage and front fairing. Apart from that, there are other changes as well in the form of four analogue gauges with a digital screen on the Transcontinental instead of a single-pod analogue instrument console found on the standard model. The Transcontinental also gets a Marshall co-branded audio system managed through a huge 10.25-inch TFT screen.

Both the newly introduced cruisers benefit from two-way 25W Marshall speakers that come integrated into the bike's front fairing. In terms of features, the bikes get three riding modes - Rock, Roll and Rain, while the standard rider safety features include Automatic Stability Control (ASC) and engine drag torque control (MSR). Optional bits on the bikes include Reversing aid and Hills Start Control.