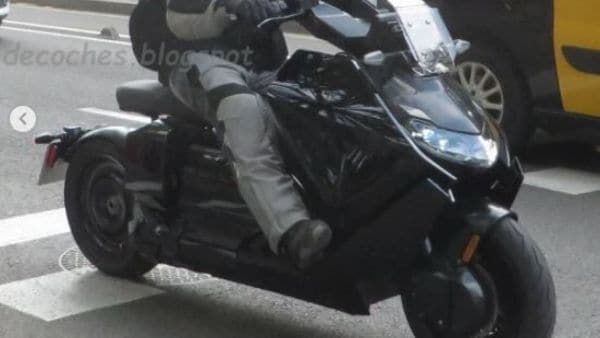 BMW is one of the major automobile manufacturers present in both the car and motorcycle segment is working towards electric mobility. The German auto giant has already introduced its electric car and now it is working on an electric two-wheeler as well. The BMW Definition CE 04 is the latest project in the company's e-motorcycle plans.

The first look of the electric BMW scooter shows it in a very stylish and appealing form. However, it is not sure, when the German auto brand will bring it to the market for mass buyers. Also, the automaker is yet to reveal the production details of the electric scooter as well.

First revealed as a concept in November 2020, the BMW Definition CE 04 is notable for its striking appearance than the BMW C Evolution electric scooter, which has been in business since 2014.

As the test mule suggests there will be a wide V-shaped LED headlamp with integrated LED daytime running lights that sits neatly at the centre of the front cowl. The 10.25-inch touchscreen instrument cluster is something that adds more appeal to the electric scooter.

Instead of a conventional scooter, the BMW Definition CE 04 gets an H-shaped foot area. The seat is expected to come with a contrast colour tone to the body, while the taillight will be a neatly integrated LED unit. As it appears, instead of a wheel-based BLDC hub motor that is available in most electric scooters, the BMW model will get a mid-range electric mill that comes with a chain-driven system.

BMW has not shared any technical specifications so far. But, the currently available BMW C Evolution is capable of riding at a top speed of 130 kmph, which could be matched by the new model as well.