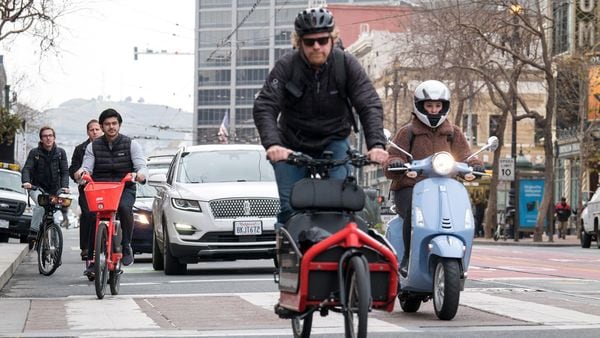 Bicyclists ride on Market Street in San Francisco. Passenger cars and ride-hailing services will be indefinitely prohibited from traveling on portions of Market Street, the major thoroughfare in the Financial District, though they'll still be able to cross it.

In the two months since San Francisco’s Market Street went mostly car-free, the central downtown artery is palpably calmer, and scooter and bike travel is on the rise.

Since the Jan. 29 closure, the average number of dockless scooter trips provided by one company, Spin, has risen 30%, according to a report from CityLab citing data from Populus, a mobility data startup. (CityLab was recently acquired by Bloomberg LP.)

Findings have been trickling in since Jan. 31, two days after the “Better Market Street" plan went into effect. That plan allows for freight deliveries, fire trucks, buses, and streetcars to continue to travel along the thoroughfare. CityLab reports that after just one day of the new access rules, the San Francisco Municipal Transportation Agency reported that bicycle ridership on Market Street jumped 20%. By the end of February, the increase was 25%. Buses have been running 6% faster on average, according to the San Francisco MTA.

Other data from Inrix, a global traffic analytics company, found only a minor uptick in vehicle congestion on surrounding streets—an issue raised by critics of the car ban before it was implemented. Inrix analysts have said they see similar effects in New York City, in and around 14th Street, which was closed to private vehicle traffic in October.

Many policymakers are turning to projects similar to Better Market Street, the 14th Street Busway, or the car-free zones featured by a growing number of European capitals.