Bajaj has a joint venture with Austrian off-road bikemaker KTM. While the KTM bikes are manufactured and sold in the domestic market, the Husqvarnas, another brand owned by KTM, is expected to be make its entry in here in some months.
By :
| Updated on: 15 Nov 2019, 06:35 PM 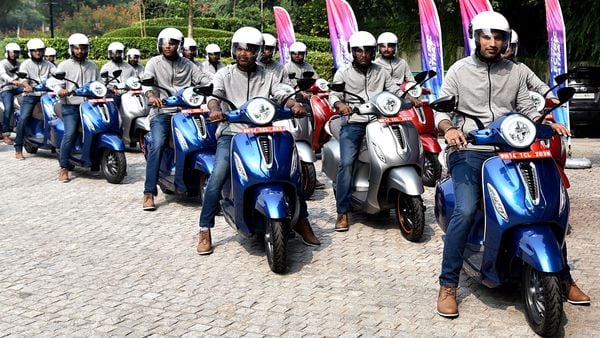 PUNE : Two-wheeler major Bajaj Auto, which had last month re-entered the scooter segment with an electric version of its iconic Chetak brand, is planning to share its e-scooter platform with KTM and Husqvarna.

The city-based company had discontinued the scooter business in 2005 after the segment saw a demand slump amid growing popularity of motorcycles. The company will start deliveries of the new Chetak from January initially in Pune and Bangalore.

"The best way to be a global company is to produce platforms which are modular and flexible on one hand and on the other should be leveraged by different brands. Going forward, we can use this platform for both KTM and Husqvarna scooters," managing director Rajeev Bajaj told reporters here on Thursday.

Bajaj has a joint venture with Austrian off-road bikemaker KTM. While the KTM bikes are manufactured and sold in the domestic market, the Husqvarnas, another brand owned by KTM, is expected to be make its entry in here in some months.

Bajaj said he already had discussions with Stefan Pierer, the KTM chief executive, on this, and that the product under development now.

"So you can imagine if this has to be a KTM scooter, it has to be ready to race and if it has to be a Husqvarna, then it has to live up to its cool image. So we will have different brands and models which will progressively be rolled out," Bajaj said.

Once finalized the new EVs will be sold through the 500-strong KTM dealerships and not through the regular Bajaj Auto dealership network.

Though the company has not has yet announced the price of the e-scooter, it has indicated that it could be in the range of ₹1-1.50 lakh and will come with a three-year/50,000 km warranty with a likely battery life of at least 70,000 km, which means it will not be charged fast.

"Fast-charging reduces the battery life by 25-30 percent and we want the Chetak to carry on the durability feature like its previous one," said Eric Vas, head of urbanite division at Bajaj Auto.

The scooter will offer a range of 85 km on sports mode and 95 km on eco mode on a single charge of around 5 hours, he added. PTI IAS BEN BEN