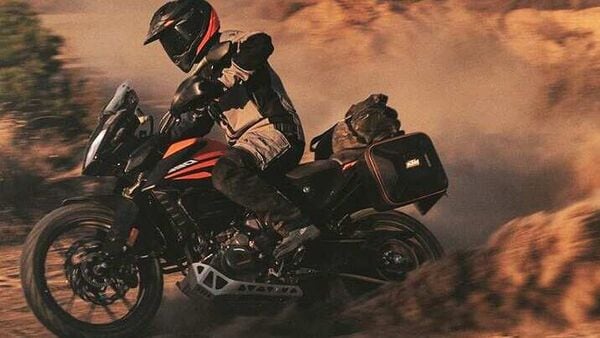 KTM's brand new MY22 390 Adventure has started arriving in the dealerships indicating an imminent launch. Only recently, the 250 Adventure went on sale in the Indian market, and the next in the lineup will be the 390 Adventure that is expected for launch sometime in March'22.

With the latest yearly update, the motorcycle is bound to receive two new colour options namely grey-black scheme and a blue scheme. Both the new paint options will come with fresh orange accents and body graphics. The updated options take inspiration from the company's bigger ADV offering, the 890 Adventure. Apart from the fresh colour update, the bike also receives new tank shrouds and rear side panels which come out to be slightly wider than the saddle.

As far as the features go, expect the motorcycle to carry on its all-LED lighting setup, as well as a fully coloured TFT instrument display enabled with smartphone connectivity, and optional turn-by-turn navigation. The bike will also get an adjustable windscreen and also expect a standard 12V charging port.

At the heart of the motorcycle will continue to sit the same 373.2cc single-cylinder, liquid-cooled motor. This engine is rated to produce 42.3 bhp of maximum power and 37 Nm of peak torque. The engine gets a six-speed gearbox with a standard bi-directional quick-shifter.

Apart from the engine, expect the new 390 Adventure to also carry on the same hardware setup in the form of a non-adjustable inverted front fork and a rear WP Apex mono-shock. For braking, the bike will feature single disc brakes at both ends and a dual-channel ABS with offroad mode.

After the new 390 Adventure, KTM will also introduce the new RC390 in India.