The Yamaha R15 has entered a new generation change for 2021. Although, the new updates don't bring any noticeable change to the way it rides.Buying the Yamaha R15 V4.0 will instantly add you to the cool club of your college, however, it is now costlier than ever.
By : Prashant Singh
| Updated on: 09 Dec 2021, 06:19 PM 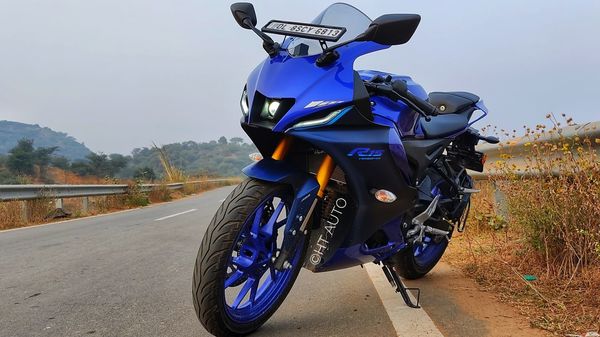 The Yamaha R15 has entered a new generation change for 2021. Although, the new updates don't necessarily bring any noticeable change to the way it rides.

Yamaha YZF-R15, the name needs no introduction as it was one of the earliest offerings by the Japanese two-wheeler maker in India to have ignited the trend of sports bikes in the country. Over the years, the motorcycle has gone through a series of up big and small updates to keep itself relevant and up to date as per the current market needs. For 2021, Yamaha introduced a complete generation change on the beginner sports bike. Version 4, or V4.0 was launched in India a few weeks back, and here's how it performed in our road tests.

The new Yamaha YZF-R15 V4.0 introduces itself as a completely new bike, but it really isn't. While the basic platform and engine remain the same, what has really gone through a significant update is its out design, especially at the front. While not that the previous R15 was any less sporty looking, but the latest version has managed to further level up in terms of looks. The front section now looks clearly inspired by the 2022 YZF-R7, especially considering that the latest R15 also gets a very similar Racing Blue paint scheme with almost the same stickers. Just like the R7, there is the use of a dual-tone effect on the floating body panels. While the base uses a lighter tone, the upper panels come in a darker, matte shade. Even though the front section and the side profile of the R15 look entirely new, the rear end looks more or less the same, when compared to Version 3. 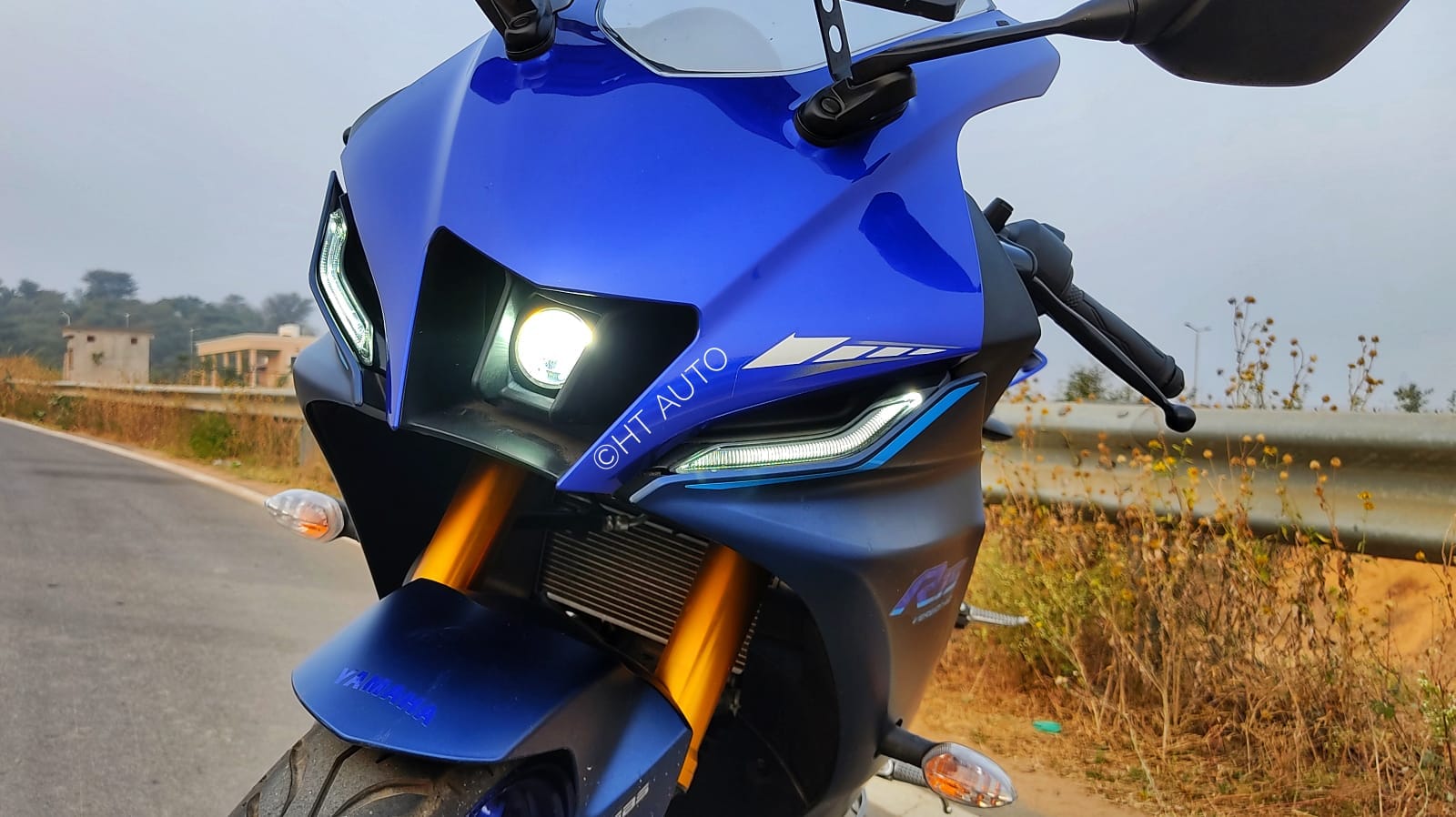 The new R15 V4 carries over the front-end design from the bigger YZF-R7 sports bike from Yamaha. In fact, the exterior body paint, panels as well as stickers also appear to be inspired by the bigger R7.

Apart from the aesthetic updates, Yamaha has also made sure to give the sports bike a bunch of new features which are unheard of in the segment. While the smartphone Bluetooth connectivity is now found in the majority of two-wheelers, even lower a segment or two, what really ups the ante is the introduction of ride modes (Street/Track), quick-shifter (up), and also switchable Traction Control System.

The display remains a fully digital LCD unit but it now displays more information. Apart from the regular data such as speed, rpm meter, time, gearing, additionally, there is a Traction Control (on/off) icon, latest lap time, faster lap time, and much more.

Housed around the iconic and highly popular Deltabox frame, the new R15 only continues to do what it has done in the past, and not much has changed in that sense. It still runs on the same 155 cc liquid-cooled, 4-stroke, SOHC, 4-valve engine delivering 18.4PS of power all the way up at 10,000 rpm, backed up with 14.2 Nm of torque at 7,500 rpm. The engine of course gets the same 6-speed transmission as well and comes with a slipper clutch. Honestly, this configuration has been a consistent performer for Yamaha and since there was no urgent requirement, the powertrain has been continued along without any major tweaks. It still gets the same VVA tech which allows the powertrain to pump thrust all the way around the higher rpm range. 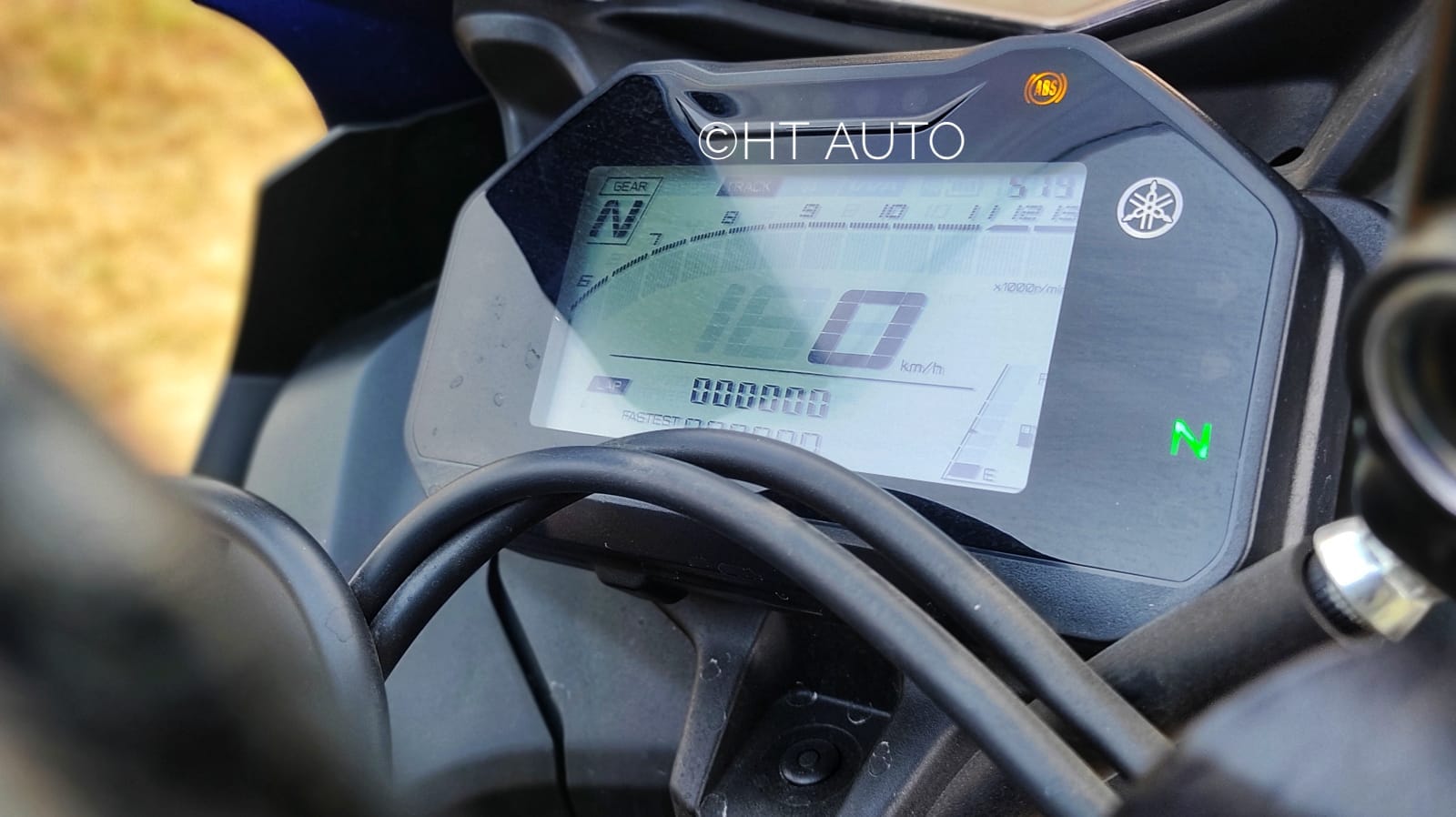 R15 V4 misses on a full colour TFT display which could have been a nice touch given the premium it charges. Although, the current LCD screen isn't bad to look at.

Also, the review would remain incomplete without mentioning how smooth and tractable this engine is. The power is delivered right from the word go, and the bike lunges forward swiftly and revs rise utterly quick. However, the power output of 18.4 PS doesn't really excite too much, even though the R15 feels fairly quick in terms of acceleration. The mid-range left me wanting as the bike takes time to respond in terms of roll-on accelerations, but as soon as about 7,000-7,500 rpm is crossed the engine seems to be throwing out all the withheld power back again.

The clutch remains soft and the gear changes are quick, precise, and error-free. While the addition of a quick-shifter is certainly a welcoming move, but I found myself struggling to use it. Even after shiting to track mode, it didn't feel as smooth as an actual quick-shifter as I had to blip the gas at times to slot in the upper gear. While the front end of the R15 V4 comes out fully updated with R7-inspired design, the rear, however, remains more or less the same.

The R15 V4 essentially is the R15 V3 in terms of the way it handles, and Yamaha has decided to not alter or change its riding geometry. Because if it's not broken, why fix it?

The Deltabox frame contributes to making the R15 a light, agile and sharp handling sports bike. The company has also stuck to the same wheelbase (1325 mm) and swingarm but has upped the suspension setup in the form of Telescopic upside Down Fork (USD Fork) which keeps the front more balanced and connected around the corners.

Only recently got chance to ride the new generation @India_Yamaha R15 V4, so thought of sharing this image (left) from a few years back on the last-gen bike. USDs, sure have made front-end more balanced. Full review at @HTAutotweets https://t.co/C9rMcBflgM pic.twitter.com/hPpx0BIlnG

While I didn't get the chance to ride the bike on track unlike Version 3.0 which I tested on the MMRT back in 2018, the new one also manages to stay fairly impressive. The kind of lean angles it promises even on city roads makes me want to buy this bike. I don't want to sound like a fanboy, but R15 is clearly among the best handling sports bikes you can buy in the entry-level segment.

The braking is handled by a 282 mm disc (single) upfront, while the rear uses a 220 mm disc brake. The stopping force from this combination is spot on, no complaints. Buying the Yamaha R15 V4.0 will instantly add you to the cool club of your college, however, it is now costlier than ever.

The R15 V4 is a perfect learner's tool. It is a shining beacon of precise Japanese engineering and its commitment to sports biking. With the latest gen update, the R15 has gained some ultra-cool features, but they all come at a cost. As of December 2021, the bike retails nearly at ₹1.71 lakh (ex-showroom, Delhi) which is a serious price for a 155 cc bike in India, but if you are okay with its displacement, then there is no replacement on my radar that is as cool as the R15 V4.0.