The new Star City Plus motorcycle is now available in a red-black dual-tone colour scheme.With the yearly update, the TVS Star City Plus bike has gained new features and equipment additions.
By : HT Auto Desk
| Written By : Prashant Singh
| Updated on: 02 Mar 2021, 10:27 AM 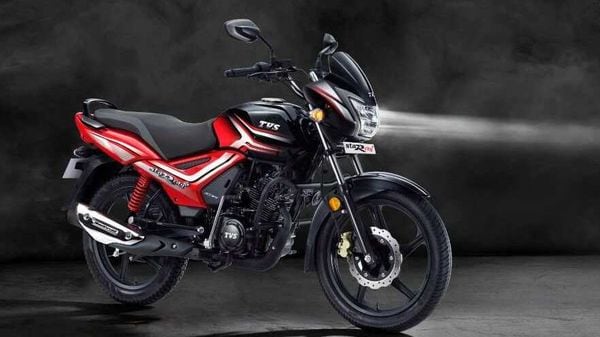 The new Start City Plus disc brake variant is only ₹2,600 costlier than the standard model.

TVS Motor Company has launched the 2021 edition of the Star City Plus motorcycle in India at ₹68,465 (ex-showroom Delhi). With the yearly update, the new bike has gained a host of new features and equipment additions.

The new Star City Plus motorcycle is now available in a red-black dual-tone colour scheme. It has also been updated with ET-Fi technology (Ecothrust Fuel Injection) which delivers 15% more fuel consumption in comparison to the model it replaces. It has also been added with a LED headlamp, as well as USB mobile charger.

As per TVS, the new 2021 edition builds on Star City+'s 15-year-legacy and it has garnered over 3 million customers to date.

The motorcycle sources power from a 110 cc, single-cylinder, fuel-injected engine which is known to deliver 8.08 bhp of maximum power at 7,350 rpm and 8.7 Nm of peak torque at 4,500 rpm. The engine pushes the bike to a maximum speed of 90 kmph and comes mated to a four-speed transmission.

The suspension kit on the bike includes a telescopic front fork and 5-step adjustable rear shocks. It rolls on 17-inch wheels which come shod with tubeless tyres. The braking duties on the bike are handled by disc brakes at the front end and drum brakes at the rear end.

The new disc brake variant of the bike is only ₹2,600 costlier than the standard model which gets drum brakes at both ends and is priced at ₹65,865 (ex-showroom, Delhi). This also makes the TVS Star City Plus come out as one of the cheapest motorcycles to get the optional front disc brake.